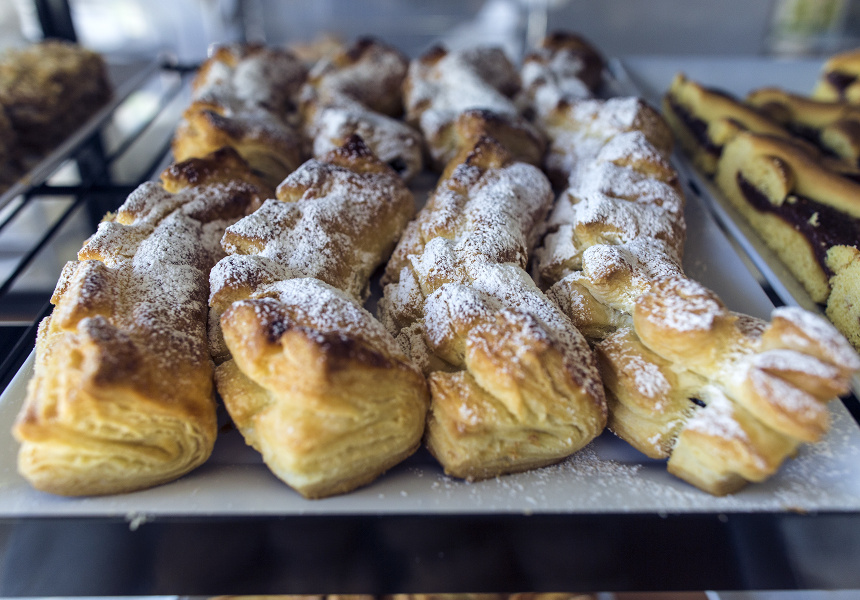 The outside of La Paula Continental Cakes and Sandwiches looks like a retired milk bar that’s been untouched since the ‘80s. It’s completely misleading because inside there’s a throng of caramel-stuffed treats and Chilean street snacks that you can’t get anywhere else in Sydney.

In the west it’s an institution. Two Chilean immigrants, Aglae and Victor Casanova, first opened it in Liverpool more than 30 years ago. Back then they were serving empanadas and alfajores to an almost-exclusively Chilean audience. Since moving to Fairfield in the mid-‘80s, and eventually expanding to Kensington, La Paula has grown a loyal local following.

Despite management being passed down to the next generation – the Casanova sisters Claudia and Daniela – everything is still made by hand from Aglae and Victor’s original recipes. When we asked Claudia what we should eat, without hesitation she said the torta tre leches. “It’s a triple-milk cake. It’s typical to Chile.” The name, which roughly translates to three milks cake, refers to the trio of milky ingredients. First the butter-sponge cake is soaked in condensed milk and cream; it’s then arranged in layers with manjar blanco (or dulce de leche depending which side of the Andes you’re from) and meringue. It’s got the same appeal as childhood birthday-party sponge cakes, but with way more panache and with caramel flavouring.

All the cakes (and there are a lot) have either manjar blanco or quince jam. The other house favourite is the alfajore, a common Chilean street snack with two cracker-like biscuits sandwiching a large dose of thickened manjar blanco. Claudia says they’re not typically eaten as desserts but before dinner as a snack. “Every house does it, before dinner you have them at around six.”

Almost everything at La Paula is a mix of Chilean street food or home-style snacks. Empanadas are the middle ground, available throughout Chile both on the street and in the home. La Paula does a variety of styles either deep fried or baked. “The beef is typical, that's what you have every Sunday for lunch as your entrée,” Claudia says. As well as the remarkably beef-pie-like empanada de carne, with beef, olives and egg, try a deep-fried de queso, with a soft, flaky pastry filled with molten cheese.

The street-food side of the menu is filled by completos, the Chilean version of a hot dog, as well as burger-sandwich hybrids done either lomitos (with sliced pork) or churrascos style (with slabs of beef). Both the completos and the burger-sambos can come with palta, a Chilean guacamole, and sauerkraut, which is typical in Southern Chile, an area with a history of German immigration. Despite all of the baked deliciousness on offer Claudia says La Paula’s original clientele still keeps coming back only for the most basic thing. “The older Chileans come in a lot just to get their bread for the day.”