A Saturday-only market stall selling award-winning saucisson. The cured sausages are made in Sydney but use French traditions. 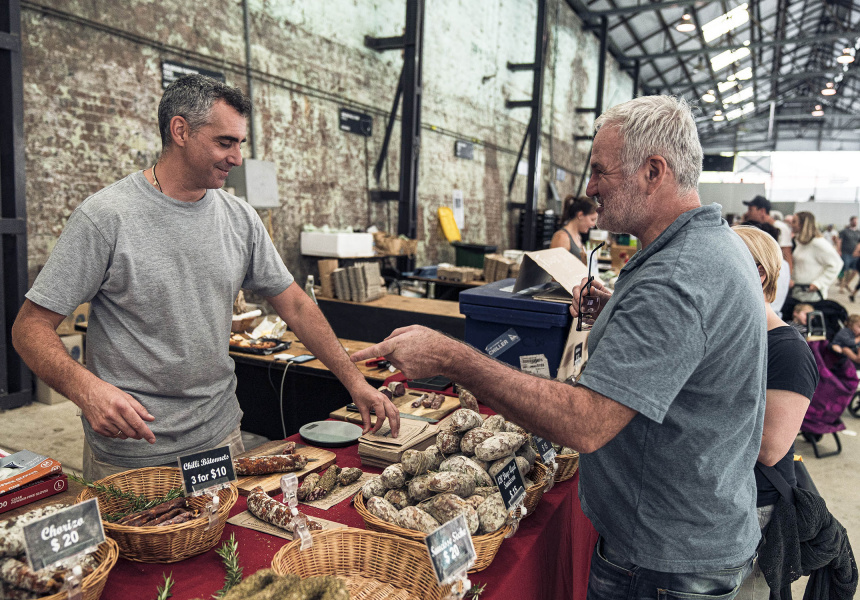 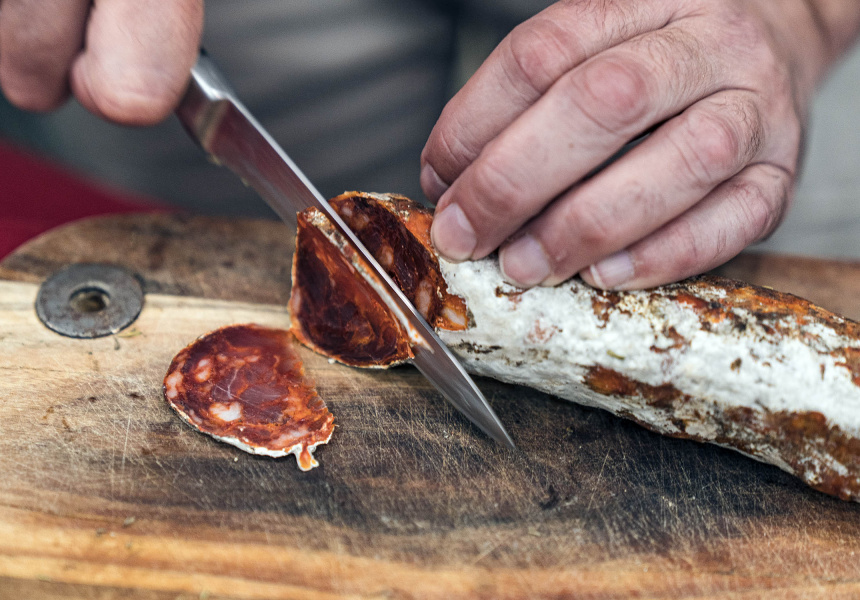 In 2018, Ardèche, a small town in the south of France, hosted the world’s first festival devoted to the French sausage-making tradition of cured sausage, or saucisson. Australia had one representative at Mondial Rabelais du Saucisson: Jean-Marc Amar, who runs La Bastide.

Amar won three silver medals, which was a great surprise not just to the French judges and his French competitors, but also to himself.

Charcuterie wasn’t the plan when he came to Australia in 2007. He was here for a holiday but met and fell in love with his future wife, Sarah. In France he had trained as a chef, so he decided to work in French kitchens in Sydney, where fellow expats would ask him where they could buy saucisson, the air-dried, fatty and lightly spiced sausage (usually pork). Amar had nowhere to send them.

He had learnt to make the cured sausages with his cousin when he was younger and saw there was an opportunity to produce and sell them in Sydney. So, with help from Sarah (who is now his business partner) and a friend, he began his saucisson career in 2009. “There was an event organised by Alliance Française. It was in a big hotel: music, wine-tasting and many people, French and Francophiles. I just turned up with my saucisson, a chopping board and a knife … I had no produce to sell, it was just for tasting, but suddenly I was answering questions about where to get my product and when it would be ready to buy. I improvised and took orders.”

That early success wasn’t just down to the lack of competition – many of Amar’s first customers loved the saucisson because it reminded them of France. “You offer a French kid candy or saucisson, they will take the saucisson. Ask any French person – we always have saucisson in the kitchen,” he says. It was essential he followed tradition, so he made his sausages with only pork shoulder and backfat, wine, salt and pepper. He couldn’t get the same breed of pigs as they use in France, but he found a close alternative: free-range Berkshire pigs from NSW. Instead of using plastic or cellulose casing as many big producers do, he wrapped his sausages the traditional way, with sheep intestines.

His product range is small. He has classic saucisson, one that’s aged for 100-plus days, a drier cut, a chorizo-like spiced version and a Corsican-style one that’s covered in dried herbs (thyme, rosemary and crushed juniper). The only non-saucisson products he makes are Toulouse sausages and velvety pork rillettes, sealed traditionally with a layer of duck fat. “In the old times they didn’t have any refrigeration, so they would do this to preserve the meat. You can take the fat off and use it for cooking,” he says.

In the future he hopes to make more kangaroo saucisson (something he made for Mondial Rabelais du Saucisson in 2018), as well as experiment with crocodile. In June he will compete again in the Mondial Rabelais du Saucisson. “Never, ever would I have imagined that one day I would be awarded by the French in a blind tasting for a French product. It was pure fantasy. I didn’t even think I could make a living out of this.”

You will find La Bastide at Carriageworks Farmers Markets and the Orange Grove market every Saturday.