Huge, tandoor-cooked Afghan breads for $1.40 and a restaurant next door with biryani, kebabs and curries. 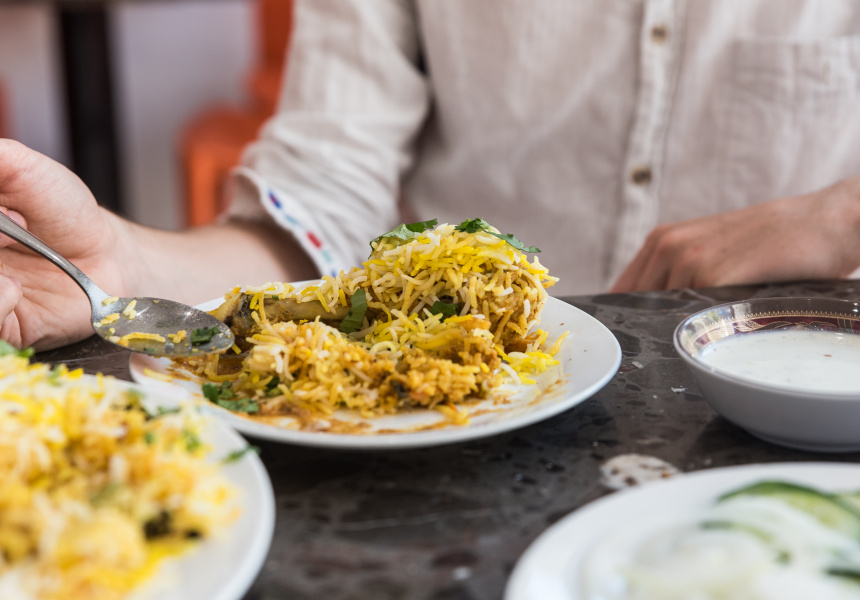 The bread at Kabul Bakery is massive. It’s longer than a skateboard, airy, smoky, slightly charred and chewy like a good pizza crust. It’s also $1.40 for a loaf. “It's very cheap. We make a very small profit but we sell a lot. We make more than 1000 breads a day,” says Nasim Mohammadi, Kabul Bakery’s owner. He’s not exaggerating. Come to the bakery on any given afternoon when people are clocking off from work and you’ll see a queue that rivals the worst days at the RTA. This one moves much faster, though.

Kabul bakery is well known among Sydney’s Afghan population, and most of Auburn, too. Mohammadi says the recipe for the bread is simply, and traditionally, just wholemeal flour, salt, water and a little yeast. The kicker is the oven. “We use a traditional oven called a tandoor,” he says. “Ours is clay, it was made here.” Behind the counter there’s a long, tiled bar with two clay cylinders. At the bottom of each is a bed of slowly burning charcoal. Intermittently one of the bakers will spread a sheet of dough over what looks like a boxing glove and wham it onto the inside of one of the ovens. The bread sticks to the side of the oven so one side crisps and chars while the other puffs out. Once it’s done a baker will use an oar-like paddle to scrape the bread off the side and throw it onto a fresh pile, ready to be sold.

There are four kinds: oiled bread called roghani; a thinner, sesame-topped bread called baraka; a barley bread Mohammadi makes for customers with blood-sugar issues; and the classic Afghan bread. Despite being the plainest version it’s the latter that brings all the queues. “It's very healthy because it's natural. It's brown, there's no rolled dough inside to make it fat or anything like that,” says Mohammadi. “All over Afghanistan you can see the same [bread]. Everywhere, every home, every party, we use bread.”

Alongside the bakery Mohammadi and his brother-in-law, Manzor Masaimi, run a no-frills restaurant doing simple, Afghani home-style meals. There’s charcoal-roasted kebabs on rice; a biryani with a lucky-dip mix of preserved lemons, baked chicken and chunks of curried rice; chicken handi (a heavily spiced gravy-like curry); and, curiously, New York-style fried chicken. “The bread is free with every meal. Even with biryani, people don’t always like bread but we give it,” Mohammadi laughs.