Tradition and home-style cooking are the main focus at this Korean eatery. It specialises in beef broths – one cooked for 72 hours – and a simple rice dish that’s served in a one-person pressure cooker. Plus every order comes with more than 10 free small side dishes called banchan. 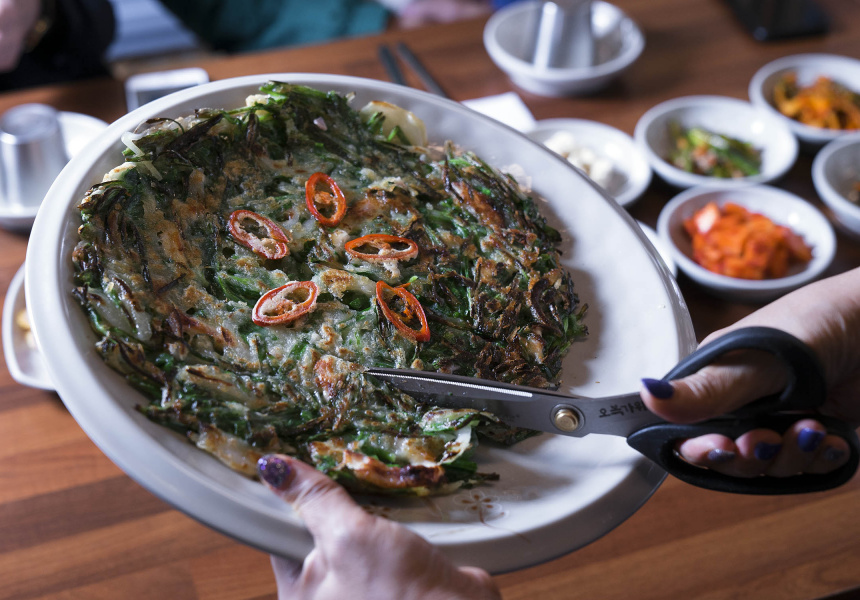 Two young guys with big gestures and vibrant voices order the popular Korean rice dish, bibimbap. Before the bowls arrive, a waiter brings over 11 banchan, small dishes filled with kimchi, marinated seaweed, chestnut jelly, egg rolls, fried ham, pickled radish, fish cakes and even a pasta salad. An hour later they leave, their table a wake of saucy bowls and half-eaten banchan, and on their way out they pay $32 – the price of two bibimbaps.

Receiving 10 or more banchan free with your meal is standard at Hansang. The Strathfield eatery does this because it wants to replicate old-school, home-style Korean restaurants. Most Korean places in Sydney serve some combination of street food, fried chicken, barbeque and anju (food served to go specifically with drinks). Hansang does a lot of that too, but its main game is banchan, broth and rice.

You can see (and smell) the two broths as you enter – they are in enormous boilers near the door. Sa-gol is made with a mix of beef and ox bones simmered for 72 hours owner, Ji Woong Jung says. It’s robust, with a cream colour and the viscosity of high-fat milk, while the gom-tang is a lighter, slightly more translucent broth made from boneless meat simmered over a short amount of time. Both have a depth of flavour and the restorative power all great soups should have.

You can find these on the menu under the “rice and soup” section – categorised that way because of the Korean tradition of serving soups with a side of rice (many choose to dump the rice in for extra thickness and heartiness). The gom-tang comes with your choice of beef on the bone, pork or sundae (a lighter Korean blood sausage with a rice noodle filling and a slightly jellied texture). The heavier sa-gol can be topped with sliced ox, beef knee bones or ox-tail meat tender enough to fall off the bone with a good shake.

Jung, who runs the restaurant with his partner Ji Jun Hwang and chef Seung Jun Kim, says the soups aren’t special, but they are traditional. Through an interpreter he tells us they’re what travellers would order at rest stops in South Korea.

If you’re early enough (most of these soups are considered breakfast foods and Hansang is open from 7am), you may be able to nab one of its 30 daily servings of samgyetang, a herbal ginseng-and-chicken soup famous for its delicate broth and supposed healing properties (including its fabled ability to grant consistent erections). In Sydney it’s often made from a packet mix, but Kim and Jung source their ingredients from Korea (besides the chicken and the sticky rice they use to stuff the poultry) and make it from scratch.

It’s ogokbap, though, that best represents home-style Korean cooking. It’s a simple bowl of steamed multigrain rice with chestnuts and beans cooked in individual pressure cookers. When it arrives at the table the lid is popped to release the steam and to reveal a rice-filled cast-iron bowl. Once you’re almost finished, boiling water is poured in so you can finish with an earthy rice soup.

It’s not a glamorous dish, but that’s exactly how Jung wants it. The restaurant veteran has opened 11 eateries across Australia, including Hansang in mid 2019, and he knows it’s easier and cheaper to open a barbecue or hot-pot restaurant, rather than this style of place. But he’s committed to making extensive house-made banchan and other delicacies to give Sydney’s Korean community something they miss.