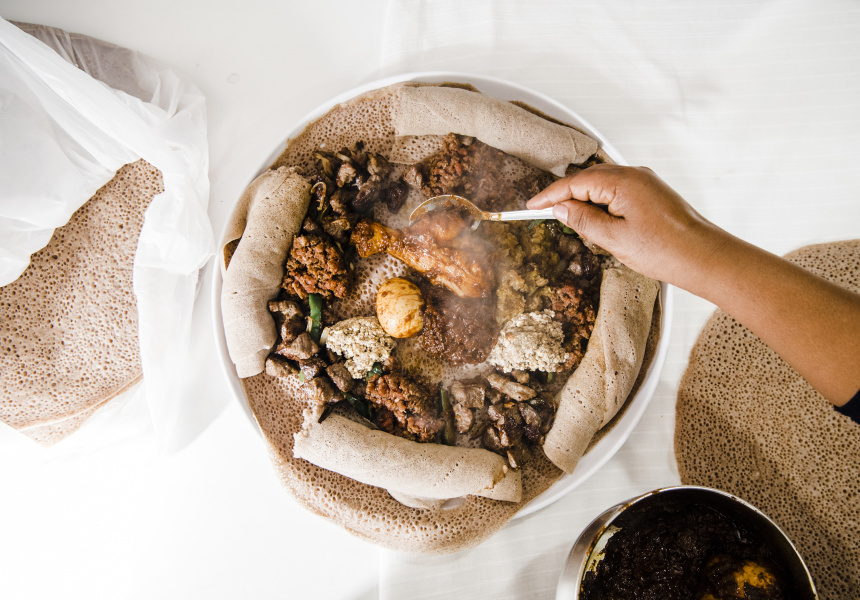 The owners of Gursha (Yibeltal Tsegaw and Rahel Woldearegay) have no interest in transforming their family recipes to suit a Western palate. Their aim is to provide the Ethiopian and Somali communities here with the same tastes and traditions as home.

The cuisine is centred on injera. It’s like a spongy pancake, and its texture and tang come from a two-day fermentation process, after which it’s grilled like a crepe on a flat iron. It’s eaten with everything. The most traditional way is to serve it as a platter, covered in neatly arranged piles of tibs (fried meat), wat (an often spicy curry-like stew), kitfo (raw-beef mince mixed with a hot blend of spices) and ayib (a salty and crumbly house-made cheese). “There is an Indian influence in Ethiopian culture. The spices are similar. The traditional food is similar too,” says Tsegaw.

As well as being an edible plate that absorbs all the spices and oils of the meal on top of it, these pancakes are also the only form of cutlery. Tear a piece, hold it open between your thumb and fingers (like a clamp) and use it to grasp bits of stew, meat or salad. If you’re confident with the technique, then you’re ready to try gursha – the Ethiopian custom of feeding others. It involves sliding the pancake into the mouth of a beloved friend or family member.

Ethiopia is a diverse country with nine ethnic divisions, each with its own language, culture and cuisine. Although everyone eats injera, what you’ll find on top depends on which ethnic group is cooking or eating. Tsegaw and Woldearegay are both Amhara people – Ethiopia’s most populous ethnic division, alongside Omoro. Two of its most famous recipes – kitfo (raw beef) and doro wat (a gravy-thick stew made with chicken drumsticks, onion, whole eggs and niter kibbeh, which is like a butter) – are also Ethiopia’s most famous dishes. “We marinate the butter for two days … the main spice is cardamom,” says Woldearegay.

Mostly due to local orthodox fasting traditions, Ethiopia also has a large repertoire of vegan recipes. Rather than raw beef and meaty stews, Gursha serves an injera platter with shiro (a garlicky split-pea stew that’s the texture of pate), misir wat (a red-lentil stew cooked with berbere, an Ethiopian chilli powder) and various salads.

Ethiopia is a coffee-obsessed nation, so it would be remiss to finish up at Gursha without a hit of the most intensely bitter and caffeinated coffee tradition on earth, and a bowl of the best, butteriest popcorn to go with it.

This article first appeared on Broadsheet on June 13, 2018. Menu items may have changed since publication.