One of the best scoops of gelato in the world, and hardly anyone in Sydney has heard of it. 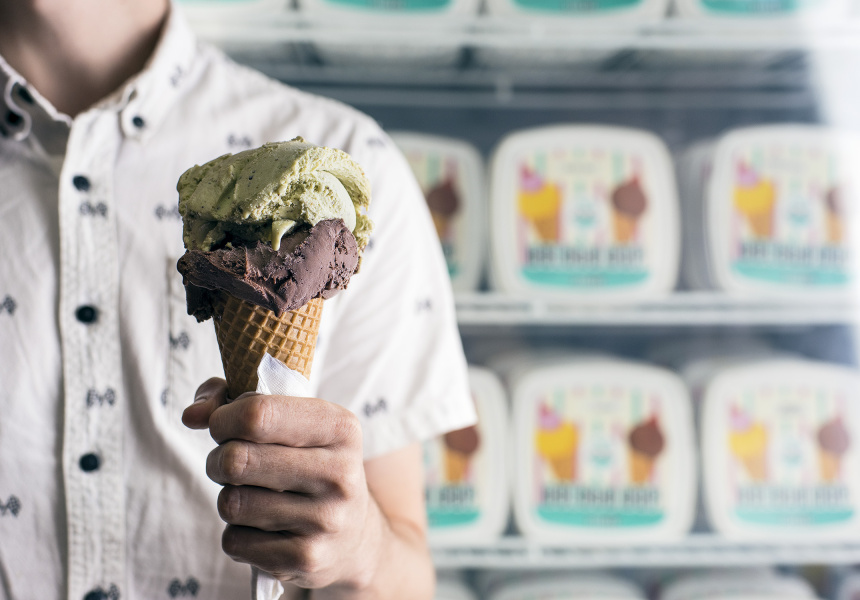 Suddenly, mid-sentence, Martino Piccolo has a moment. He clasps his hands, shakes them as if in prayer, rocks his head and lets out a laugh. It's as though he's just won the lotto, but he’s reacting to something far more ordinary. He's just remembered a gelato flavour – the Augustus, a dark-chocolate gelato with a ganduia ripple and chunks of dark chocolate and peanut brownie.

Piccolo is the owner of Art of Gelato Michelangelo. He’s a world-famous gelato maker with a gelataria most Sydneysiders have never heard of. In 2014, as a competitor at the Gelato World Cup, he was given a mystery box with a packet of Loacker biscuits and told to make a gelato. Two hours later he was crowned world champion. “Winning the world cup is huge in Italy. I'm more known in Italy than I am in Australia,” Piccolo says with a hearty laugh. He’s now the captain of the Australian team. Working with him is none other than Donato Toce, the head gelato maker at Gelato Messina.

It seems absurd that Piccolo’s Art of Gelato Michelangelo isn’t famous here, but the reason is actually simple. It’s in Carramar, near Cabramatta. “If I had my gelataria in the inner west, it would be a different story,” says Piccolo. “I live locally and I don't like travelling too far for work. It's not a good thing.” He’s been trading in the area for 30 years. “When I started a lot of these companies that sell you bases and powders weren't around – you had to make do with what you had.” He makes everything from scratch with fresh ingredients. “A pastry chef doesn't buy packet mix to bake a cake,” he says.

When Piccolo first started, he wasn’t making the same award-winning gelato he’s making now. “I asked my uncle in Italy for some tips. Then a family friend, who was an old artisan, gave me two weeks of intense training,” he says. The next week, Piccolo was practicing in his garage. “I was dreaming gelato. I would be out there making gelato at three in the morning. I just couldn't get away from it.”

Two decades later, he’s running the store with son Vince. Piccolo makes zuppa inglese, pistachio, cassata, lemon, stracciatella and all the other traditional flavours. His son concentrates on new flavours (such as the Augustus). A recent creation by Vince was a sorbet with tequila, chilli and lime. Martino thought it would fail because the chilli seemed an odd ingredient, but to Vince's great joy, it sold out really quickly.