A Macedonian feast in downtown Newtown. 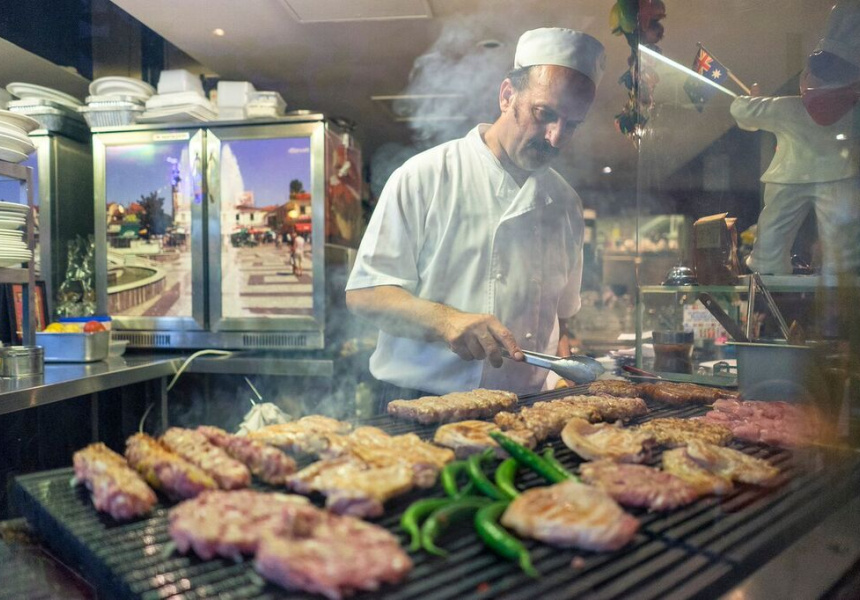 Nights at Europe Grill are loud; laughter, plates clanking and the incessant sizzle of the restaurant’s centrepiece, the grill. It feels like a celebration and it probably is. This is where the Macedonian community goes whenever something exciting happens.

The Macedonian cuisine exists under the wide umbrella of Balkan food, but Macedonia, like many of its neighbours, has its own culinary nuances, dishes and eating traditions. Europe Grill is one of only two places in Sydney where you can find them (the other is Kapital in Kogarah).

The decade-old restaurant is almost entirely run by two individuals, Elena Kurtanovic and Goran Pucakoski. Kurtanovic is the maître d' and the source of much of the restaurant’s laughter. Pucakoski is everything else: butcher, baker, chef and sausage maker. “We cook everything fresh. He makes smoked sausages, he makes everything,” says Kurtanovic. Pucakoski’s incredible labour is evident not only in his thick, calloused hands, but also in the expressions of his customers who talk about Europe Grill with the kind of pride you see in parents with overachieving children.

One of the reasons it’s so loved is because it represents the whole Macedonian experience. Traditionally it starts with rakija. The gold-tinted alcohol varies from slightly sweet to burning and bitter, and because of its reputation for quick lubrication, it’s always accompanied by a vegetarian course. This includes Macedonia’s ubiquitous potato-and-cabbage salad and the national dish, tavče-gravče, or “beans in a pot” as Pucakoski calls it. It’s a stew of butter beans and dried capsicum baked in a clay pot. It’s crimson, rich and thick, like how you’d imagine a marinara sauce to taste if it were slow cooked for an entire day.

The next thing to arrive to the table, usually with beer or red wine and a fair dose of grandeur, is Pucakoski’s array of grilled meats, sausages and sides. “The classic is ćevapi and pleskavica,” Pucakoski says. They’re skinless sausages, the former a spiced mixed sausage and the latter an onion-flavoured burger-patty-like mix. “The ćevapi you can find in the city, but this is different. You can't find one like this,” Pucakoski says. The difference is the quality of the meat. While in Macedonia, Serbia or Bosnia they might be stodgy and dry, here they’re juicy and tender from the quality local beef. “Everything is eaten with bread,” Kurtanovic says. Ajvar, a garlic-heavy and slightly spicy red-capsicum paste is served on bread (and with pretty much everything else). The last course, consumed at the end of every Macedonian meal, is coffee. It’s served thick and granular with baklava or tulumbi, a churros-like roll of fried batter lathered in thick syrup.