This Kensington restaurant is known for bakmi – a choose-your-own Indonesian dish of noodles, meat and bok choy. 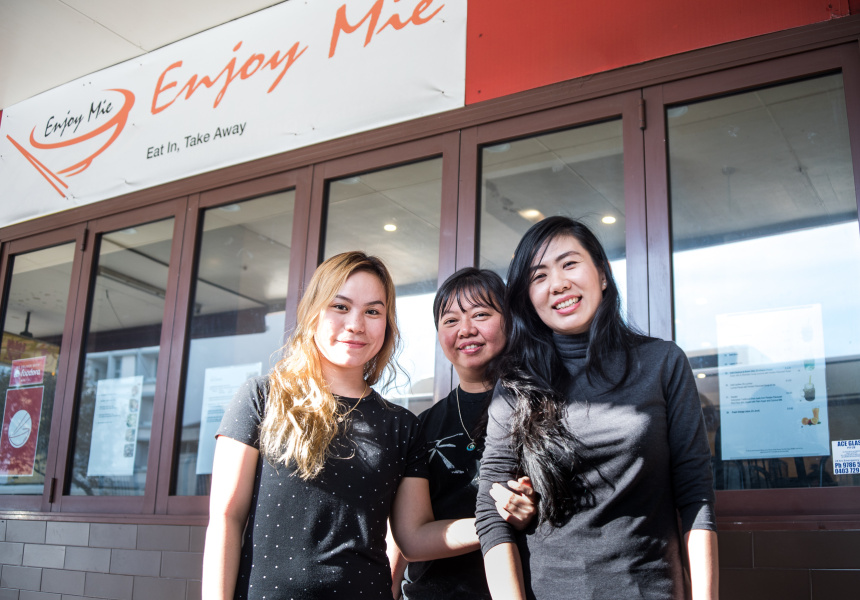 We spend a lot of time looking for restaurants that are loved for doing something no-one else does. Something so niche nobody else knows how to do it. Sometimes though, what people miss most about their country of origin is the simplest dish.

For Chinese-Indonesians in Sydney that dish is often bakmi, the most common version of which is a bowl of egg noodles, minced meat and steamed bok choy, served with a side of simple chicken broth. “In Indonesia people eat these for breakfast, lunch and dinner. Anytime, anywhere,” says Benny Chang. Along with Andry Lie and Aldo Muljadi, he’s one of the co-owners of Enjoy Mie, one of Sydney’s most popular Indonesian noodle restaurants.

Just like in Indonesia, the dish is improvised by the customer – you choose the noodles, meat and toppings you want. In Indonesia the most common noodles are pulled wheat noodles, similar to the Chinese lamian. Here it’s all about egg noodles – a particularly rewarding experience. Lie’s friend makes them and delivers them fresh. They’re thin, extremely soft and pick up sauce well.

The secret to good bakmi noodles is not necessarily how they’re made but what they’re tossed in afterwards. “The flavour of bakmi is not just from the meat. The taste of the noodles is extremely important. We toss them in salt, sugar and soy,” Chang says. There are other ingredients too but Chang won’t share them aside from saying it’s not MSG. In Indonesian it’s common to bathe the noodles in animal fat, so some kind or lard or butter is a good guess.

There are two choices for the meat. Chefs Olin and Rain Anne prepare sweet minced pork, heavily marinated in kecap manis and red shallots, or salty shredded chicken, slow-cooked with Chinese sherry and soy. Chang and around half the customers will choose just meat with steamed bok choy. Lie and other regulars will go all out and top their bakmi with garlicky fried mushrooms, squid balls, a soy egg, wontons, barbequed pork, crackling-like fried wonton skins, and dense beef balls. “In Indonesia they may even put more things. Crab meat, crab balls, roast pork,” says Chang.

It seems almost everyone, regardless of how much else they order, also gets a serve of baso goreng. They’re called meatballs on the menu but that may be deceiving to anyone unfamiliar with Indonesian cuisine. Unlike European or Chinese meatballs these aren’t juicy, rich asteroids of meat, they’re more like dense, dry bread but flavoured with shrimp and beef.