The place to go for a ridiculously cheap Thai breakfast. 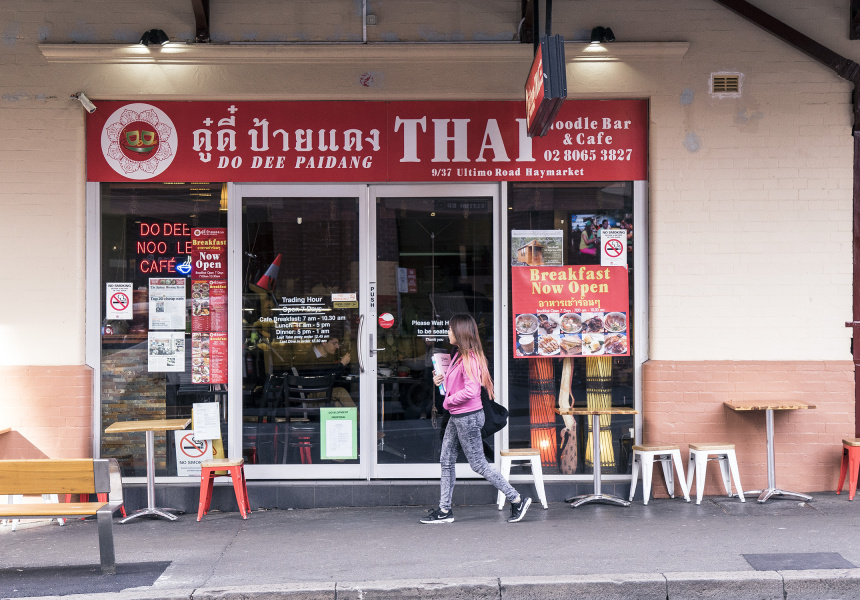 Dodee Paidang is no secret. All three of their brightly coloured restaurants, located in Haymarket, Bondi Junction and Cabramatta, are regularly packed with Thai customers and the occasional chilli-eating adventurer (it serves one of the hottest noodle soups in Sydney). The Sydney food blogging community has covered the Haymarket outlet. One thing that strangely hasn’t caught on (unless you’re Thai and living in the inner city) is this restaurant’s Thai breakfasts.

“Before, we had Aussie breakfasts,” says Dodee Paidang’s Nutchari Ekthammakun. “We are a Thai restaurant, so no would come and eat it. They kept asking for Thai breakfasts.” Unlike most European cuisines, the Thai cuisine doesn’t distinguish much between when you eat what foods. Generally, whatever is eaten at dinner or lunch is also fair game at 6am. “We eat everything for breakfast; sticky rice may be too heavy at 8am but we still eat it,” Ekthammakun says.

Despite Dodee Paidang’s exhaustive dinner menu, it has kept breakfast simple by focusing on northern-style street food. Half of the eight-item menu is made up of khao tom varieties. Khao tom is like a soupier version of congee (the Thai version of which is called joke) with grainier rice pieces. It’s prepared by par cooking rice on its own and then pouring stock over the top. Like joke it can be a bit of a free-for-all when it comes to toppings and ingredients. Dodee Paidang’s northern-Thai chef, Aroonchai Luknongbu, serves it with sweet homemade Chinese-style sausages; fish; prawns or peppery minced pork. A classic order would come with a cold, sweet Thai coffee, a milk tea or a glass of fresh soy milk.

Luknongbu also makes the Isan-style sausage (sai krok), a popular northern street snack he serves with sticky rice and a bewilderingly intense mix of raw garlic, fresh Thai chillies, papaya and lettuce. The sausages are powerfully fragrant (more than 20 spices and herbs go into them) and satisfyingly sinewy and tender in the middle. They are slightly crisp on the outside from being twice cooked; first baked and then grilled.

One of the most common street snacks across all of Thailand is khao neow moo ping – skewers of marinated pork served with sticky rice. At Dodee Paidang it’s outrageously popular. “We order 80–100 kilos of pork neck a week just for that,” says Luknongbu. Sticky rice isn’t really a breakfast snack, more a common addition to market-stall snacks. The same goes for moo dad deaw (sticky sundried pork).

Although the menu now is just khao tom, sausages and things on sticks (crispy wonton wrappers filled with quail eggs being the last option), Ekthammakun says Dodee Paidang will bring in more breakfast dishes such as fresh soy-milk soup with deep-fried bread and an egg dish that’s cooked in a pan with sausage and vegetables.