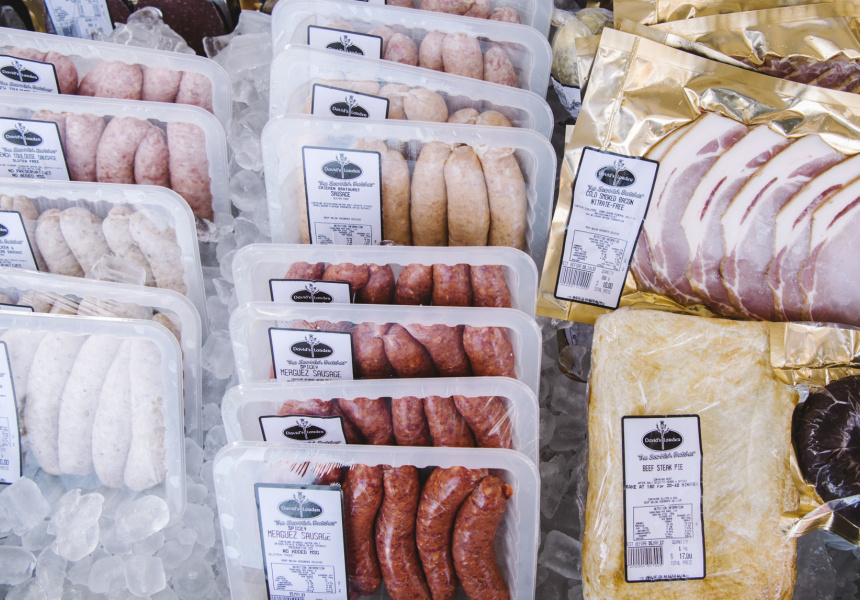 David MacDonald is a third-generation Scottish butcher. “My grandfather started his first shop when he was 19. My father fell into the trade as well; he left school at 15. I started there as a wash-up boy and ended up managing it too,” says MacDonald.

When he moved to Sydney, it was never his intention to spend his days making sausages; he wanted to join the corporate world. “Impatient as I am, I tried that for two weeks, didn't get any responses and got the shits so I got a job in a butcher.”

Word got out that there was a Scottish butcher in town and soon he was inundated with requests from fellow expats for haggis and black pudding. “Eventually I struck up a deal where the boss let me use a space at the back to make sausages and black pudding for a market in French's Forest.”

Now he runs David’s Larder, a two-armed business that consists of a butcher in St Mary’s and a roving market stall specialising in the same goods his family made. The most famous of which is haggis, a traditional sausage that has inaccurately gained a reputation for being a putrid food reserved only for Scots and those who have lost dares. “A lot of people think you're eating the actual intestines but it's just a sausage, naturally encased like any other,” MacDonald says. The filling is just liver, onion, oatmeal and spicy seasoning – a common in Dundee, where MacDonald grew up. The liver certainly makes it rich but it’s far from pungent, more like a heavy, peppery meatloaf.

MacDonald makes all his goods from scratch. There’s black pudding (a rich sausage made with pig’s blood, pork belly, oatmeal and heap of white pepper), tattie scones (potato cakes texturally somewhere in between a hash brown and a flat bread), white pudding (like black pudding but with pork mince, onion and ginger rather than blood) and Scottish bacon. “In Australia it's often pre-cooked,” he says of the bacon. “We do it cold smoked. It’s got a nice, velvety texture and is still very juicy.”

David’s Larder also dabbles in pastry. The most popular is the traditional Scottish pie. Unlike the classic Australian pie, these are gravy-less mince pies (traditionally with mutton but here beef is more common) made with hot-water crust pastry: a mix of lard, boiling water, flour and salt, cooked in an iron press.

MacDonald still gets advice from his dad. “When he comes on holidays he brings his apron and his overalls. He can't help himself.”

Check the David’s Larder website for details of market stall locations and times. Next month it’ll be moving from St Mary’s to location closer to the city.