This Persian restaurant is busiest during its community’s New Year celebrations. 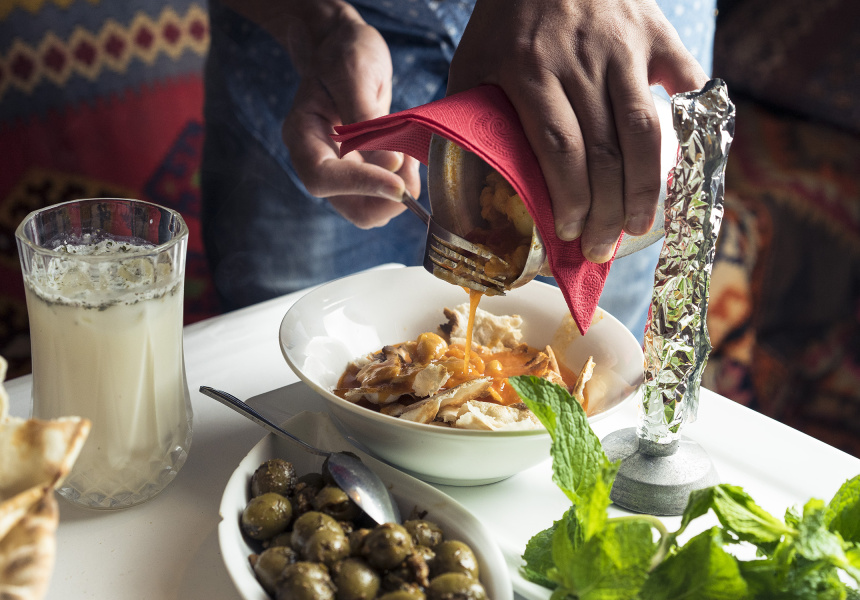 Dizi is one of the most traditional and best loved dishes of Persian cuisine. “Dizi is one of the oldest recipes in Iran, it goes back maybe 2,000 years,” says Sarah Adeli. She’s the owner of Castlecrag’s Cyrus the Great.

It is a slow-cooked stew made with lamb, white beans, chickpeas, tomatoes and potatoes. It’s served in a cylindrical stone pot next to flat bread, pickled vegetables, fresh herbs and what looks like a metal plunger. All these elements combine to make two remarkably distinct dishes. The first is made by tearing bread into small pieces and placing them in a bowl with drained liquid from the stew. The other is a dip made by mashing the remaining stew ingredients with the metal plunger. Vegetables and herbs can go with either.

On weekends it’s one of the most popular dishes. This weekend, though, most people will be eating foods that start with “S” (seen in the Persian alphabet). Sunday is the first day of the Persian New Year (Norooz or Nowruz) and Cyrus the Great will host one of Sydney’s many celebrations (you may notice some pre-ceremonial ashes in the courtyard).

Eating foods starting with “S” is part of the Haft-Seen tradition. In involves seven traditional foods arranged on a table, each representing seven angelic heralds of life – rebirth, health, happiness, prosperity, joy, patience, and beauty. At Cyrus they’ll be laid out on a central table where Adeli says people will queue for photos.

The biggest banquet comes on the first day of the New Year, which is this Sunday. “It can be whatever foods you want but there has to be fish and rice in it,” says Adeli. At Cyrus the Great that means buttery fish kebabs with saffron rice, charcoal roasted tomatoes and freshly baked flat bread from the tandoor oven.

For those who want to join in on the celebrations Adeli recommends having a glass of red wine (it’s traditional over Norooz, which is a pagan festival, not an Islamic one) and trying ghormeh sabzi, a curry-like stew with a thick blend of Persian herbs. It is incredibly tangy from limoo amani, blackened sun dried limes. “These things are very strong. Not everybody likes to have it, but in Iran this is very traditional food. They're very old,” she says. For this weekend only there’ll be a whole barbequed lamb as well, but for those who miss out (it’s extremely likely that Friday, Saturday and Sunday will be packed) try the restaurant’s charcoal roasted kebabs.