An old-school Brazilian churrascaria in Petersham, with roving meat skewers carved at the table. When Casa Brasil first opened it was a tuckshop selling imported Brazilian frozen foods, dried goods and cooking ingredients, such as dende oil, pickled chillies and cassava flour. That was 10 years ago. Regina Kytzia, Casa Brasil’s owner and chef, says immediately after opening the requests started piling in – her customers, almost all Brazilians trekking to Petersham, wanted food from their homeland. And they wanted Kytzia to cook it. The only problem was, Kytzia didn’t know how to cook.

"I went to Brazil to check. My mother taught me a lot," says Kytzia. When she returned, Casa Brasil opened as a cafe serving home-style Brazilian food such as feijoada (black-bean stew with mixed meats) or bobó de camarão (fried prawns stewed in cassava puree and coconut milk). Three years later, the business moved down the street and opened the churrasco restaurant.

Churrasco, a form of barbecued meat found all over Spain, Portugal and Latin America, is one of the cornerstones of Brazilian cuisine. The others are rice, beans and cassava. Casa Brasil serves its churrasco just as you’d find it in Brazil, rodízio style – roving meat skewers carved straight at the table. There’s a large range of meats, but the most succulent and deservedly popular cut is the picanha or rump steak. “I can cook the nicest things, but people will always want picanha, rice and beans. It reminds them of home,” says Kytzia.

The rice and beans are available at Casa Brasil’s help-yourself smorgasbord which comes as part of the fixed-price churrasco. For the most classic Brazilian meal, fill your plate with both staples and cover them with farofa, ground cassava flour that’s been fried with butter, garlic and herbs. The crispy bits in the other bain-maries are polenta nuggets, deep-fried cassava and banana fritters, all common churrasco side dishes.

The other side of the menu features the home-style meals Kytzia used to serve at her cafe. Along with feijouda and bobó de camarão, Kytzia makes a few specialities from her hometown in south-east Brazil. Try the moqueca de peixe, a fish stew with coconut milk, pickled Brazilian pepper berries and capsicum. Another of her favourites, which is not on the menu, but available if you ask for it, is frango com quiabo, a garlicky stew of chicken and okra. “Many people don’t appreciate the flavour of okra because they say it's slimy.” Kytzia avoids the notorious okra clag by stewing the vegetable without ever stirring it (apparently mixing makes it slimy).

The most classic accompaniment to any Brazilian meal is cachaça, a herbal spirit made from sugar cane, which is the base of the popular Brazilian cocktail, Caipirinha. “People drink this before they go to work. My father is 92 – he always has cachaça before his lunch,” says Kytzia. 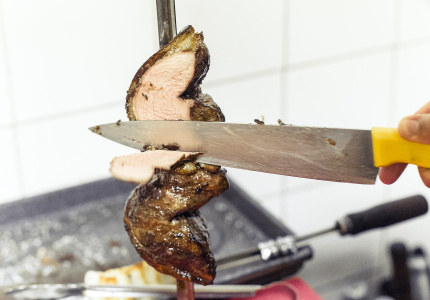