Nepalese noodles, momos and curries – all for under $16. 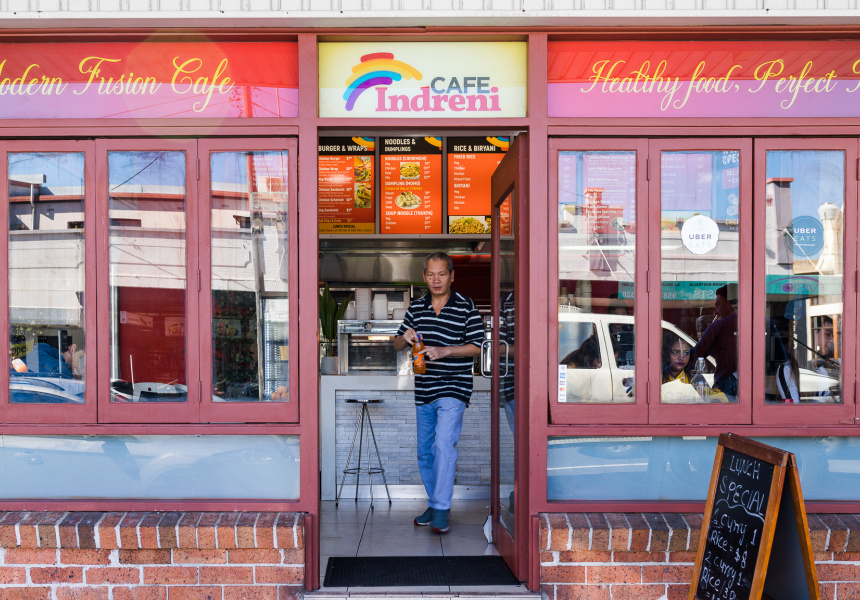 When we asked the Nepalese community in 2016 which Sydney restaurants they liked, we got one overwhelming response: The Muglan. Things are different now – Sydney’s Nepalese population is booming and restaurants have been popping up all over the place. One of the most popular recent arrivals is Cafe Indreni in Kogarah in Sydney’s South, an unremarkable looking cafe about the size of a caravan.

The eatery has bright red walls, austere furniture and a short menu of momos (Nepalese spiced dumplings), curry, burgers, wraps and schnitzel sandwiches. We ask the owner Laxman Sapkota why he thinks it’s popular and he says, “I focus on quality, and we’re neat and tidy.” And then there are the prices. He picks up the menu and points to the momos – just $9.99 for a dozen. The chicken sandwich is $6.99; the thukpa (a Tibetan-influenced sour noodle soup) is $9.99; and a four-dish platter with goat, puffed rice, pickles and crunchy, fried soybeans is $13.99. “The prices are really low,” he says. “People don't want to spend more than $10 for lunch.”

By the time we’re finished talking, the joint is full. Not many people are eating burgers or drinking coffee; most have bowls of fried noodles, momos with pickle sauce (you’ll see a lot of that, it’s bright orange, rich and surprisingly savoury) and the classic Nepalese dish of rice and curry. “Rice and curry was always my favourite thing to eat at home. All Nepalese eat this at least once a day,” says Sapkota.

Nepalese food is very similar to northern Indian food, say Sapkota, but Nepalese people use less chilli. Other spices, they use a lot. “That is the first thing, we always use spice,” Sapkota says. The cuisine is also influenced by other surrounding countries – for example fried noodles from China, and soup and dumplings from Tibet.

That’s about the most elaborate thing they do. Most meals here are purposefully simple, for an eat-and-run crowd not wanting to spend big bucks. It’s like that from 8am – when local Nepalese folk come for sel roti (a roughly textured sweet ring of fried bread made with milk and rice flour), a little bowl of chickpea and pea curry, and their first tea of the day – until after dinner.

This article first appeared on Broadsheet on August 20, 2019. Menu items and prices may have changed since publication.