The Burmese community is very excited by this new restaurant. 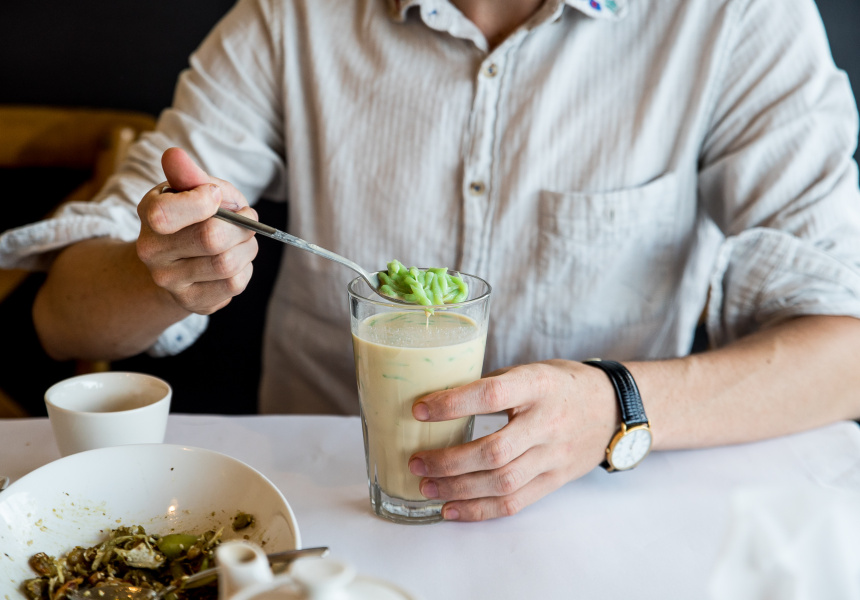 There’s a lot of chatter in Sydney’s Burmese community about a new restaurant in Granville. It’s called The Burman Kitchen, and word is it’s doing the best Burmese food Sydney’s ever seen. Sure, there have only ever been a handful of Burmese restaurants, but visit here at midday on a Sunday and you’ll see what we’re talking about.

For all the non-Burmese residents of Sydney, it’s an opportunity to experience a cuisine that’s rare here. Lay Lay Naing, The Burman Kitchen’s chef and owner, says imagine a blend of Indian, Thai – and to a lesser extent, Chinese – food. That’s not to say it’s a crude mix of the three, though; Burma has its own set of unique dishes and ingredients.

The most famous of these is the fishy noodle soup, mohinga. “Mohinga is our national dish. In Burma you'll see it everywhere, every street, every occasion,” says Naing. The base of the soup is fish paste, garlic, lemongrass, ginger and fish sauce with chickpea flour as a thickener. Depending on the region, it may be pungently fishy or mild. Niang and her sister-in-law, Tin Tin Khine, make a milder, Rangoon-style mohinga. Niang says a lot of the flavour and texture in Burmese dishes come from condiments. “Mohinga, for example, is just soup and noodle, you can add chilli, coriander, vegetable fries,” she says. Toppings can be anything, including fried bread, fried garlic, lime, fish sauce, fried gourd and crispy onions. The Burman Kitchen doesn’t offer the whole spread, but it does take off-menu requests for extra toppings.

Some of the condiments are intense, but despite this they are often added to dishes that already have punchy flavours. A good example is dishes based on ngapi (a paste made from salted, fermented fish) or lahpet (a fermented tea unique to Burma). The latter is used in lahpet thohk, a textural salad of split peas, peanuts, sesame, green tomato, chilli, dried shrimp, fried broad beans and bean sprouts that has an earthy flavour. Another version of the dish replaces lahpet with pickled ginger for a more sour, tangy flavour. "This is totally Burmese,” Niang says, adding that these are often ordered as drinking snacks.

A big reason for the diversity in Burmese food is the mixture of native ethnic groups. The Burman Kitchen does mostly Bamar (the ethnic majority) dishes, but the lahpet thohk is a specialty of the Shan people. The Shan are also to thank for htamin jin. “It's fresh rice, boiled potato and fish cooked in tomato, all mixed together,” says Niang. Like Japanese onigiri, but fishy and more savoury. From Indian-Burmese cuisine there’s danbauk (Burmese-style biryani with pickles), and from Burma’s Chinese community there are noodle dishes such as seejet khao swè, which combines garlic oil, soy sauce and roast duck.