This tiny Marrickville restaurant serves just four things, including the headliner, silky handmade banh cuon. The chef is a third-generation expert who specialises in the northern Vietnamese dish. 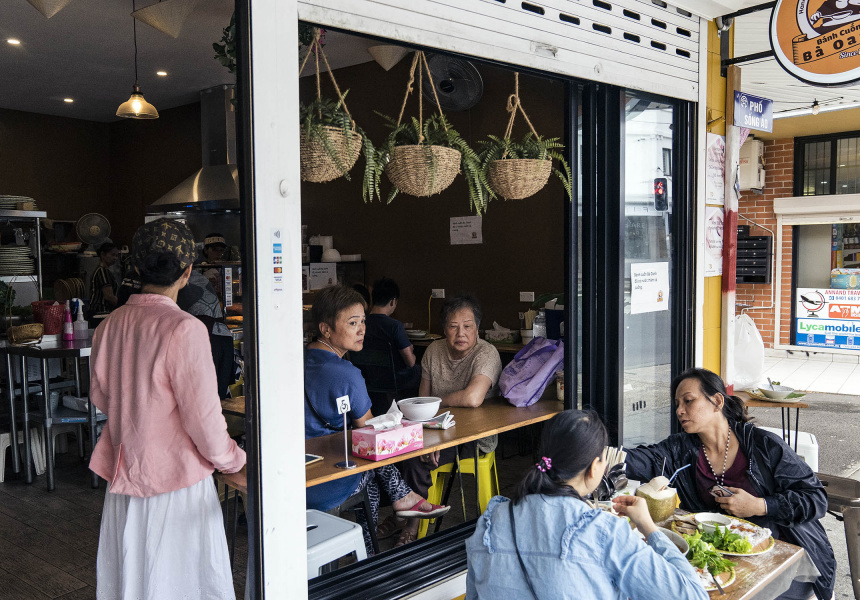 Take a translucent rice-paper sheet that's just been steamed and place pork mince and shredded wood-ear mushrooms on top. Fold the sheet around the fillings and then slide it onto a plate and serve it next to a few medallions of cha (garlicky, fish-sauce-spiked Vietnamese pork sausages with the texture of frankfurters), a tart-but-slightly-sweet dipping sauce, and a heap of fresh herbs and fried onions. You’ve got banh cuon: the silkiest rice paper roll on Earth.

This northern Vietnamese dish isn’t very common in Sydney. Most Vietnamese restaurants here serve cuisine from the south, which is where most migrants came from. But that’s slowly changing, particularly in Marrickville, where you’ll find Banh Cuon Ba Oanh, a tiny corner shop many Vietnamese locals say serves the best banh cuon in town.

Michael Lu, one of the restaurant’s co-owners, had no idea what banh cuon was just a few years ago. He was living in Revesby when he met Minh Nguyen, who was working in a nearby Vietnamese restaurant he used to pop by after work. He wasn’t there just for the food though – he wanted to chat her up.

Eventually the two married and embarked on a trip to northern Vietnam. Nguyen took Lu to meet her mother, Ba Oanh, a third-generation banh cuon chef with a restaurant in Hanoi that she’d been running for many years (Nguyen’s grandmother and great-grandmother had run it before her). “Her stall was similar to this in Vietnam,” says Lu. “We went for breakfast on our first morning and she made banh cuon. I couldn’t believe what I was eating. I had never had anything like it. After that I said, ‘This has to come to Australia, no matter what’.”

Nguyen’s mum moved to Australia and last year they opened Banh Cuon Ba Oanh. Every day you’ll see Oanh in the kitchen with Nguyen, making everything from scratch. That’s very much the case with the Local Knowledge eateries we cover, but the effort taken by Nguyen and her family to make their food is even more labour intensive than most.

The banh cuon sheets are made with house-ground rice flour and cooked on a traditional steamer to make them as thin as possible (Lu is cagey about their kitchen secrets, including what kind of rice they use). The fried onions sprinkled on top are made here too, and the fish sauce is recooked and aged to make it more like the fish sauces in Hanoi. Even the cha is made by hand. “It’s very hard and very labour intensive, but you can taste the difference; it’s very rustic,” says Lu.

Judging from the constant lunchtime and weekend queues, people appreciate the effort. Nguyen, Lu and Oanh could probably get by selling only banh cuon, but there are a couple other things on the tiny menu: xoi (turmeric-coloured sticky rice with dried mung-bean paste, fried onions and pork floss); congee (chicken-broth that’s flavoured and topped with fried bread, pickles and pork innards); and one dessert, che buoi (iced coconut milk, pomelo-pith crackers and a chewy tapioca jelly). Everything is made in-house, of course. “We wanted to make other things, but it’s hard. We only have so much strength in our bodies,” says Lu.

When asked how he feels about the fact that their tiny restaurant has received so much attention in its short life (it just won FBI Radio's "Best Eats" of 2020 category), he takes a minute, looks up and begins to cry. “We just try our best. I’m so proud of Minh. We’re just happy to be here,” he says.