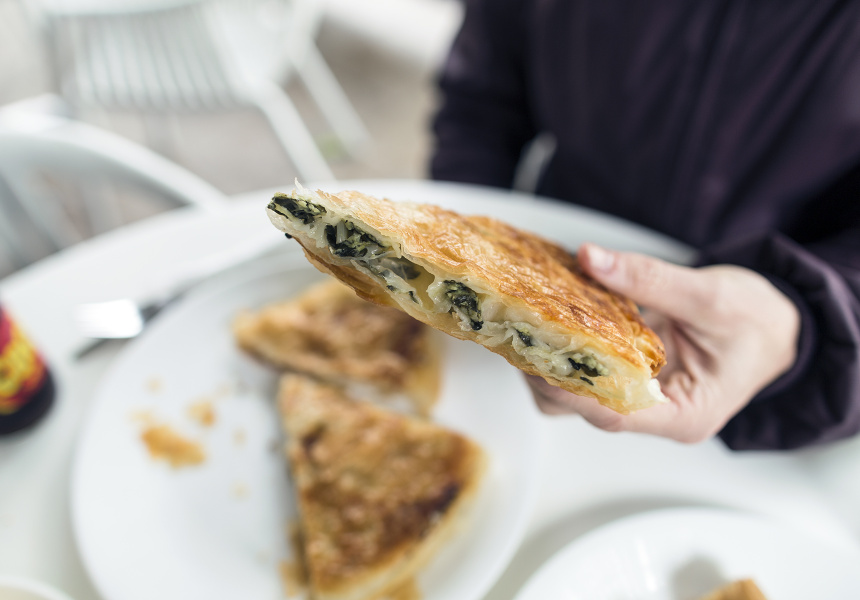 In the back of Balkan Oven there’s a muscular guy with thick-veins running down his tattooed arms. Every day he stands in the same spot flipping, slapping and whirling dough with the dexterity of a live magician. He’s making burek, a thinly layered, flaky Balkan pastry filled with meat, spinach or cheese. Out the front there’s a group of chatty Macedonians with spindly grey hair and wide hands clasping coffees, cigarettes and glasses of buttermilk. Some of them come every day because the burek reminds them of home.

Oliver Popovski and his brother Goran have been making burek for 10 years. Their father bought the bakery a decade ago but with no idea how to make burek, he went to Macedonia and found a master to teach his sons. “It took me about four-to-five months to learn. I used to rip and tear. It would land on my face, land on my head,” says Oliver Popovski.

Making burek isn’t like making a frittata, you can’t just lay it out in a pan, heat it up and eat it. When done properly it’s an incredibly intricate process. First the brothers knead and separate the dough into hundreds of fist-sized clumps. Each portion is stretched out with the bottom of their palm and then whirled around their hand until it’s wide enough to stretch over the bench and thin enough to see through. That layer is coated in cheese or meat and then wrapped around itself. The first delicate square is then layered with more stretched sheets of dough. Popovski says the most important step is the removal the offcuts. “It cooks better, it's thinner and it takes longer, but in the end, it pays off. It tastes better.”

Once baked it’s crunchy, flaky, soft centred but solid enough to hold like a campfire toasty. For fillings there’s a Macedonian spiced beef, a three-cheese combo with Bulgarian and Australian feta with ricotta, or cheese and spinach. Popovski and his mum, Ljubica, say it’s best enjoyed with a cup of buttermilk (soured milk), a traditional breakfast combination in Macedonia. For those who’ve never tried straight buttermilk, it’s surprisingly refreshing, far closer to yoghurt than custard. The old men out front tell us it’s good for digestion.

Ljubica makes all the sweets by hand from inherited family recipes. “It takes a long time, it’s very hard.” The most popular among Rockdale’s Macedonian community is the traditional tulumbe, a shiny orange thumb of syrupy fried dough. Most customers eating tulumbe, shortbreads, fig and chocolate wafers or fruit cakes will be drinking traditional coffee. It’s similar to Turkish coffee in thickness and intensity, but less bitter.

Regardless of who’s in the kitchen and what time it is, there’s always a steady stream of customers casually strolling to greet the family. “We're very tight knit here. That's what I like about this job,” Popovski says.