All-day, all-you-can-eat buffets from a diner serving the best Nepalese in Western Sydney. 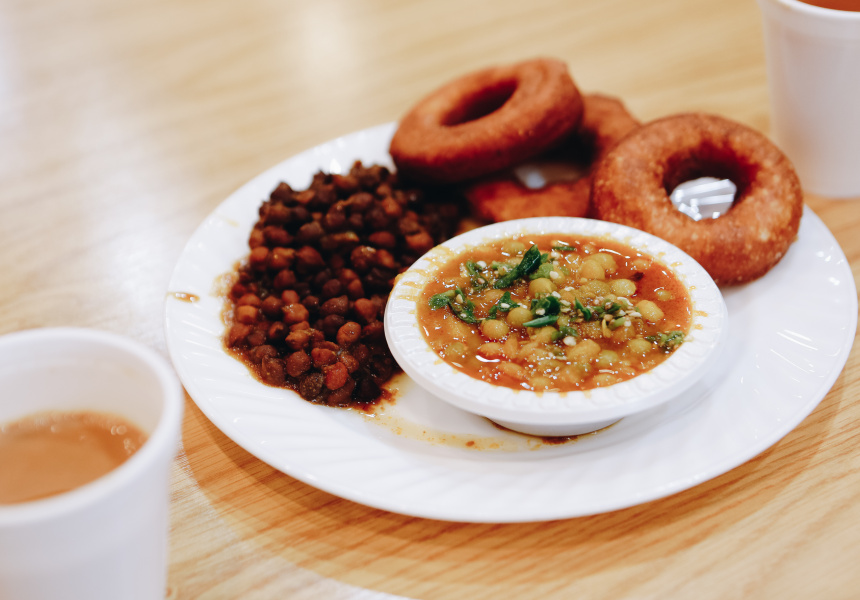 11am on Saturday at AD’s Kitchen and it feels like a festival. There’s a table of people who are as colourful as they are loud; the family is celebrating a rice ceremony and people are wearing red, yellow and ornate Nepalese robes. Elsewhere there’s a guy holding a plate stacked with nine puri (deep-fried flatbreads) and an equally hefty number of jalebi (syrupy, crunchy sweets), and there’s a woman with a bowl of curry encircled by chickpeas, Nepalese doughnuts, English sausages, eggs and hash browns.

Everyone has come for the breakfast buffet, which co-owner Amit Kumar Acharya claims is a one of a kind in Australia.

We’re here because we’ve heard Acharya and his wife and business partner Anjana Dhakal, who does all the cooking, serve the best Nepalese food in Western Sydney.

Their journey started in 2011. They were students when Dhakal suggested they go into business selling momos, or Nepalese dumplings. “She cooked five takeaway boxes and said, ‘My responsibility is to cook, your responsibility is to distribute these in the market,” says Acharya. “I had no idea what to do. All I thought is that I know I have to sell these five boxes.”

Unsure how, he went straight to his local grocer. “He knew me. I said, ‘Brother, these are Nepalese dumplings. Help us sell these to Nepalese students.’ He was our first customer. It was a beautiful day for us.”

It wasn’t long before AD’s (short for Anjana Dhakal) momos were in grocers all over Ashfield and Strathfield, and the couple were running a 24-hour momo delivery business. “We started feeling bad seeing people buying momos from the grocery shop and standing outside eating them. We thought we should have seats for these people,” says Acharya.

They opened their first venue, a small cafe in Ashfield called AD’s Kitchen. That cafe no longer exists, but the couple’s 100-seater restaurant in Campsie, in Sydney’s south-west, goes by the same name.

Almost everything here is done buffet style. Breakfasts are limited to a few English goods, fruits and the five Nepalese staples: puri, pea-and-potato curry, spiced rice pudding, fried chickpeas and jalebi. Acharya says usually you’d have one plate with puri and curry – you can eat the curry with the puri, he adds – and another with tea and sweets, but two guys here are eating their jalebi and flatbread together like a crunchy pikelet. All that, and anything more you can stuff in, is $15.

If buffets frighten you – a normal feeling in those with little willpower – ask for a menu; most of the popular buffet items are available for $12.