We’re confident in calling this the best Korean barbeque in Sydney. 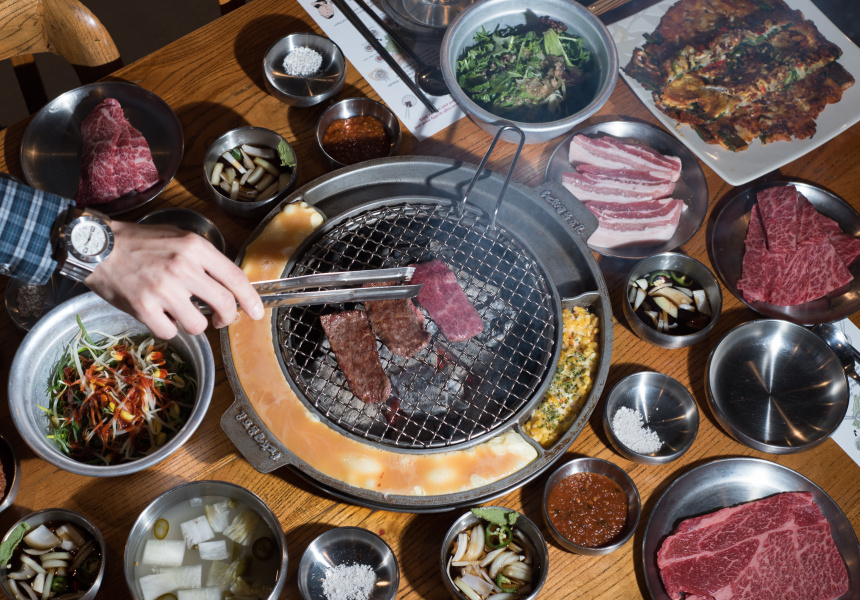 In some ways, 678 Korean BBQ doesn’t really fit in this series among the other restaurants only really known to their communities. To many people (pretty much anyone connected to Korean culture), 678 is a mega brand just below the level of popularity of something like Shake Shack (it’s owned by comedian Kang Ho Dong, you’ll see his image all over the restaurant). But despite both the Haymarket and Eastwood outlets being regularly packed, hardly anyone outside of the community seems to have heard of it.

Anyone doubting its quality because of franchise stigma should take a look at its in-house butchery. Most cuts of beef have a marbling score of eight plus and come from internationally renowned Wagyu farms such as Jack’s Creek. “When we opened we weren’t very busy. Everyone said, ‘Why don't you serve more things [it has a very concise menu]’, but I believed if we serve good quality meat and good quality banchan [traditional side dishes] we will be successful,” says 678 Sydney general manger Chris Guon.

The advantage of being a franchise is that all the recipes are just like what you’d get in Korea. “We want to replicate the atmosphere and taste of the mother country.” Guon believes what he serves at 678 is authentic. But because there are so many trends in Korean barbeque, there’s no one style.

Though for flavour and recipes, 678 is as Korean as you can get in Sydney. This will be obvious as soon as the food arrives. Many Korean restaurants serve lettuce, mashed potato or imported fish cakes as sides. 678 makes all its own banchan, including some wildly sour, pungent kimchi and a thin soup of sour cabbage and chilli that, like a pickle on a burger, cuts through a bite of particularly fatty meat to balance the meal.

When it comes to cooking the meat, Guon says many are intimidated by the process, so he has a few tips. “You don’t want [the beef] fully cooked, medium-rare is good. Two minutes, turn it over, another two minutes and then take it off. The grill needs to be really hot.” The pork belly needs to be cooked all the way through, maybe a minute extra on either side. Because 678 serves a particularly thick cut, it’s given an extra flip so the skin on top gets crisp. When eating it, first dip a piece in a little salt, Guon says. For the next bite, bundle a piece in a lettuce leaf, add ssamjang (a paste made of fermented soy beans and chilli), bean sprouts, a bit of wasabi mixed with soy and eat it like a wrap.

There are other options on the menu, a particularly good bibimbap and kimchi seafood stew included, but unless you’re in a large enough group for them to be ordered as sides, stick to the meat and get a cold noodle dish to finish. “Naengmyeon (cold buckwheat noodle soup) is good to have after a barbeque. After all the greasiness it refreshes your mouth,” says Guon.