Chef Richard Price was inspired to create this dish after a trip around the American south, where he dined at classic barbeque joints and learned from the masters. In partnership with Bull’s-Eye BBQ Sauce, he shares the secret to getting that smoky flavour just right. 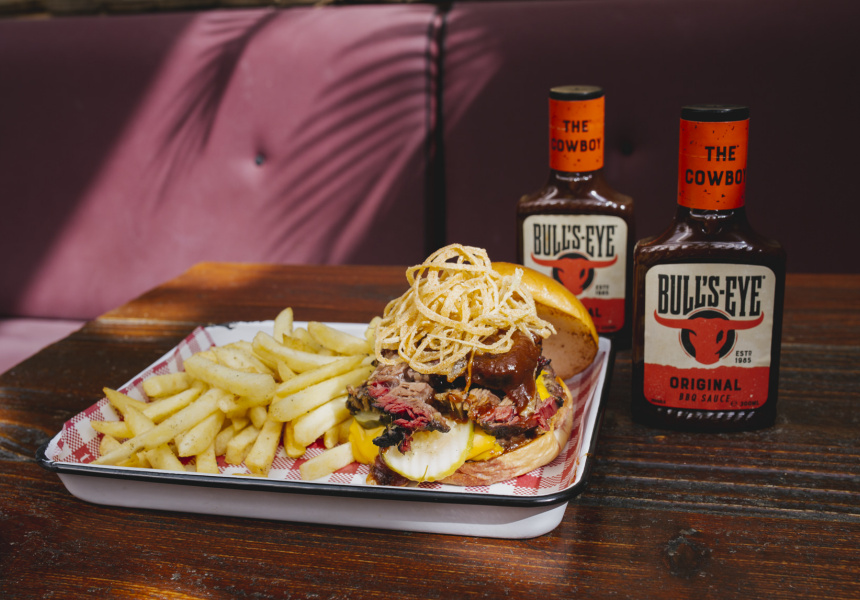 There’s something new cooking at The Oxford Tavern. The Petersham pub is known for its barbeque-centric menu, and for one month only, it’s serving a slow-cooked brisket cheeseburger with barbeque sauce.

Head chef Richard Price (The Taphouse, Gurdys, The Erko) spent time travelling around the American south in 2017, which is reflected in Oxford Tavern’s menu.

“I did a trip around Texas, trying different barbeque joints and learning from some masters there,” he tells Broadsheet. “That inspired me to get into a lot of slow Texas smoking and barbeque. I just built on that with my love of burgers.”

The taste of the Bull’s-Eye Original BBQ sauce Price used in the recipe triggered memories of travelling through America – particularly, the meals he ate there. “Texas itself has a variety of food regions and tastes, but one theme carries across them; smoked meat and barbecue sauce,” he says. “I used the Bull's Eye original sauce to carry that theme across this dish.”

The dish, called The Houston Hustle, is a cheeseburger with 12-hour-smoked brisket stacked on a classic beef patty. Here’s how Price created the special ‘burg.

Heavy on the glaze
The Rangers Valley Black Onyx brisket is glazed with a mix of Bull’s-Eye Original BBQ sauce (“The smoky tang of the sauce works brilliantly with our smoked brisket”), Worcestershire sauce and apple-cider vinegar. It goes into the pub’s smoker for 12 hours, and is reglazed every hour to build up the flavour.

“[Glazing] gives the outside of the brisket a bit of sweetness, ‘cause the sugars start caramelising along the outside. The Bull’s-Eye sauce has a bit of smoky flavour to it as well, so it just enhances that,” Price says.

Don’t be afraid of flavour
The other burger ingredients include a 100 per cent Angus beef blend patty from Vic’s Meat, American cheddar cheese, crispy fried onion strings and McClure’s pickles.

It’s all topped with a sauce made with the same Bull’s-Eye Original BBQ sauce mixed with apple juice and chipotle chilli paste for a spicy kick and more smokiness.

Brisket and burgers are integral to The Oxford Tavern’s classic smoker-focused pub menu, so combining the two was a no-brainer for the chef. It’s a dish that takes him back to his time in Houston, dining at barbeque houses and learning from pitmasters in the area.

“The sauce gave me something of a memory-feel of my time there, so I thought it would be fitting to do something around and inspired by that,” he shares. “It’s got a smokiness that fits our venue quite well.”

The famous smoker
The Oxford Tavern’s smoker – affectionately called Black Betty – has lived in the pub’s outdoor beer garden and courtyard since 2013. The venue has changed hands twice since it was first installed, but Black Betty is here to stay.

While Price’s focus now is on American-style barbeque, he started his culinary career at Italian eateries before moving up to high-end fine diners.

“I’ve been cooking for 20 years. I started my apprenticeship when I was 15 and I’ve done a bit of everything,” he says. “Then I took a little break for a while and went on a trip for a couple of months through America, where I very much got into that classic, southern-style barbeque.”

The Houston Hustle will be available at The Oxford Tavern, 1 New Canterbury Road, Petersham from October 23 to November 20.

This article was produced by Broadsheet in partnership with Bull’s-Eye BBQ Sauce.