Hairnets, jumpsuits, the opportunity to roam the floor of a warehouse usually only accessible by top chefs, an urban mushroom farm that supplies Firedoor and Saint Peter, and the inside scoop on how to make burrata are some of the highlights. 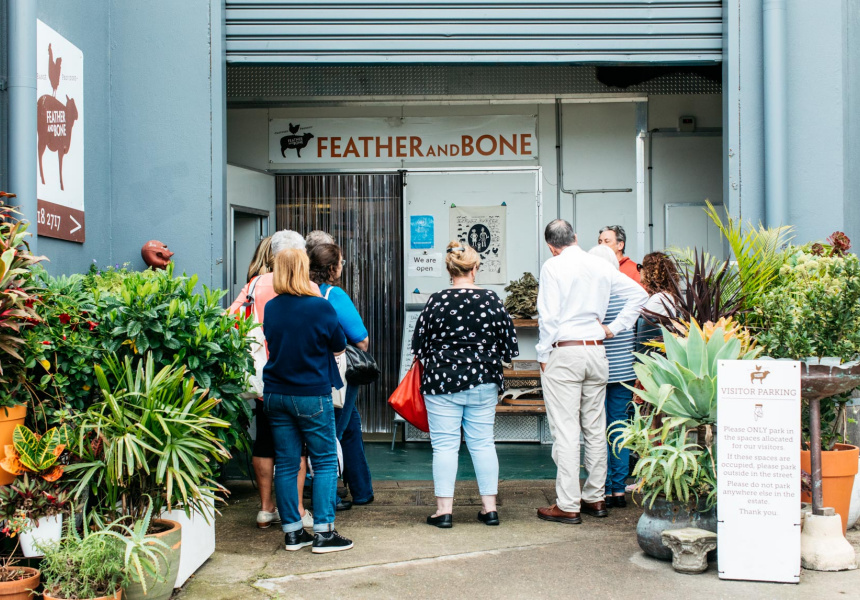 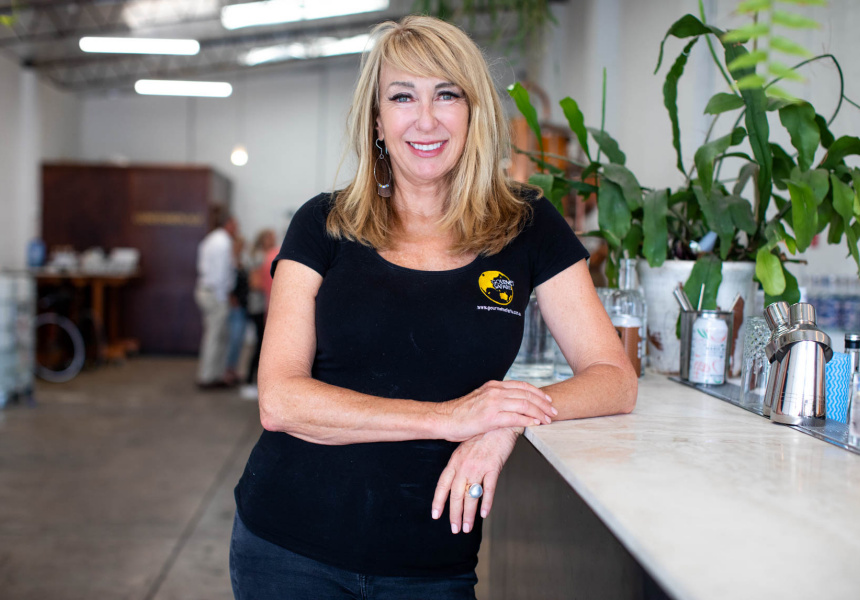 More than two decades ago, SBS presenter, journalist and author Maeve O’Meara channelled her love of connecting food and people into Gourmet Safaris, a tour company showcasing culinary secrets in cultural hotspots both in Australia and overseas – ultimately inspiring her Food Safari series on SBS.

But with the global pandemic taking international travel off the cards, O’Meara has focused on home soil over the last 12 months, developing a slew of new Gourmet Safari tours. Think evening drinking and dining tours of Newtown and Enmore, and a Turkish breakfast feast in Auburn.

“Gourmet Safaris has been a showcase for the best of our multicultural world in Australia,” O’Meara tells Broadsheet. “It’s created such strong bonds between hard-working family businesses and food lovers who return and bring their friends in a glorious rippling out of flavour and culture.”

One of her latest creations is the Marrickville Producers on a Thursday walking tour, which winds through the backstreets of the suburb, visiting its most innovative, sustainable and passionate food producers and retailers.

Broadsheet joined O’Meara for a meander through Marrickville.

Roastville Coffee
The day starts with coffee roasted in-house at Roastville Coffee. George and Destiny Choutis have invested their decades of hospitality experience into every crevice of the vast, airy warehouse. While we sip on our morning brew and peruse the beans the duo source from coffee farmers from Ethiopia to Columbia, we also sample a yoghurt delivered by Tedy Altree-Williams, who runs Coco Tribe (and is here to guide us out the back door and through to her factory). While Roastville is beloved for its dedication to the world of coffee roasting (and pods that fit Nespresso machines) it’s also worth returning for one of the many dishes drawing on the couple’s Greek heritage — including the Dirty Bird Benedict, a local favourite of poached eggs, fried chicken, polenta sage slice, rocket and harissa hollandaise.

Coco Tribe
You don’t have to be vegan or dairy-averse to enjoy Tedy Altree-Williams’ yoghurt and ice-cream. This family-run business was born 10 years ago when Altree Williams, who is lactose intolerant, started experimenting with coconut to create a dairy-free product with the same consistency as Greek yoghurt. An insider look through her factory (tip: pocket the hairnet, it’s the first of a few you’ll wear today) involves sampling ice-cream straight from the churn.

Black Forest Smoke House
Carnivores will rejoice at this urban meat-eating extravaganza. Sample a paper cup stuffed full of artisan smallgoods in the car park of Black Forest Smoke House – a family-owned and operated wholesaler drawing on four generations of German heritage. On offer are slices of dry-cured bresaola, Black Forest ham, dry-cured coppa, mortadella and salami. Owner Richard Deignan talks through the process of wet and dry ageing. It’s hard to forget his approach: “As Jack the Ripper said, the longer you let them hang, the better they get”. Grisly, but good.

Vannella Cheese
Artisan cheesemaker Vito Minoia hails from the southern Italian town of Conversano in the Puglia region – also the birthplace of burrata. It was there, as a 16-year-old, that he learned the art of making stretched curd cheeses. When he left Italy he brought his family, and his knowledge, to Australia. He now runs Vannella Cheese with his son, Giuseppe Minoia.

A visit to the factory starts with a warm welcome from creative director Anthony Silvio. Follow him up the stairs for a talk (learn to tell your buffalo’s milk from your cow’s), and tastings of ricotta, stracciatella, buffalo yoghurt, marinated buffalo feta, smoked scamorza and maestro. Next, it’s time to suit up: boilersuits and hairnets make for a great first photo of the day. The tour heads into the factory for a behind-the-scenes look at the pasteurisation, separation and maturation processes. But perhaps the most spellbinding sight is that of the little burrata bundles being made – the stracciatella, which has been mixed with cream and left overnight, is piped into sheets of hand-stretched mozzarella, then manually rinsed and tied.

Feather and Bone Providore
Feather and Bone is one of only a few whole-body butcher shops in Australia. Grant Hilliard and Laura Dalrymple source their meat – whole carcasses on the bone only – directly from trusted local farmers, and age and produce all their products on-site. This short supply chain allows for greater transparency and traceability.

“Most meat in Australia is cut in the abattoir and brought to the butcher in boxes,” Hilliard tells our group. “There is an anonymity in that.”

There’s a large window between the store and the cool room, where the carcasses hang – the ethos being that if you’re going to eat meat, you should be able to look at where it comes from. The tour takes a confronting and fascinating turn into the cool room, before giving you a glimpse of the butchers at work in the production room. Next, an opportunity to go shopping (with a discount for tour members), with products ranging from schmaltz to preservative-free, hand-ground sausages in natural skins.

Poor Toms Gin Hall
For those not used to it, hanging out with whole carcasses can be hard work. So it’s lucky our next stop, Poor Toms Gin Hall, has a tall glass of strawberry-infused gin and Fever-Tree tonic waiting for us. This plant-filled urban church is run by Jesse Kennedy and Sean McGuire. They tell a great yarn about the early days of Poor Toms, before it became a mainstay of the Sydney craft-gin scene, and explain the mechanics of their two Willy Wonka-esque copper stills. There’s yet another opportunity to add weight to your tote bag, with 25 per cent off Poor Toms products, including its classic Sydney Dry Gin and sprightly Imbroglio Amaro.

Stix
Lunch is at Stix, a loading-dock-turned-cafe. Walk through the glass doors and into the buzzing kitchen – lunch is at the chef’s table, alongside all the action. The table is littered with dishes – bite-sized Peking duck croissants; tiny salt-and-pepper Hawkesbury school prawns; and eggplant katsu, coleslaw and miso mustard pressed between two plump slices of white bread. Everything, apart from the seafood, has been made with produce from owner David “Stix” Allison’s fully certified organic farm on the banks of the Hawkesbury River. After lunch, a tour of the kitchen leads to talented dessert chef Daria Nechiporenko and a taste of her nine-layer honey cake. Then head up the stairs for a peek at the attic incubation room where the oyster mushrooms used at Firedoor, Fratelli Paradiso, Saint Peter and 10 William St are grown.

Two Providores
The day ends with a chance to enter the hallowed walls of Two Providores – supplier of artisan produce to cafes, caterers and restaurants. General manager Sally Gosper curates a tasting of some of her best finds: our group is among the first to taste a new range of Messina chocolate, before moving on to sample Tim Malfroy’s honey, which is used in the honey tarts at Quay. Next is a masterclass on how to arrange the perfect cheeseboard (tip: add Bruny Island spiced blueberries and Lucy’s Foods spiced paste) and make a honey-mustard dressing.

A long day ends on a high note, with the opportunity to run amok in the warehouse, with a discount on coveted products such as Olsson’s salt; Strangelove tonic; Nichols Farm free-range chickens (used at Quay, Bennelong and Momofuku Seiobo); Holy Goat cheeses; and Wholegrain Milling flour (used by Iggy’s Bread).

Gourmet Safaris runs its Marrickville Producers on a Thursday tours monthly. The next tour date is March 11.