It’s all about premium meats, side dishes and soju. 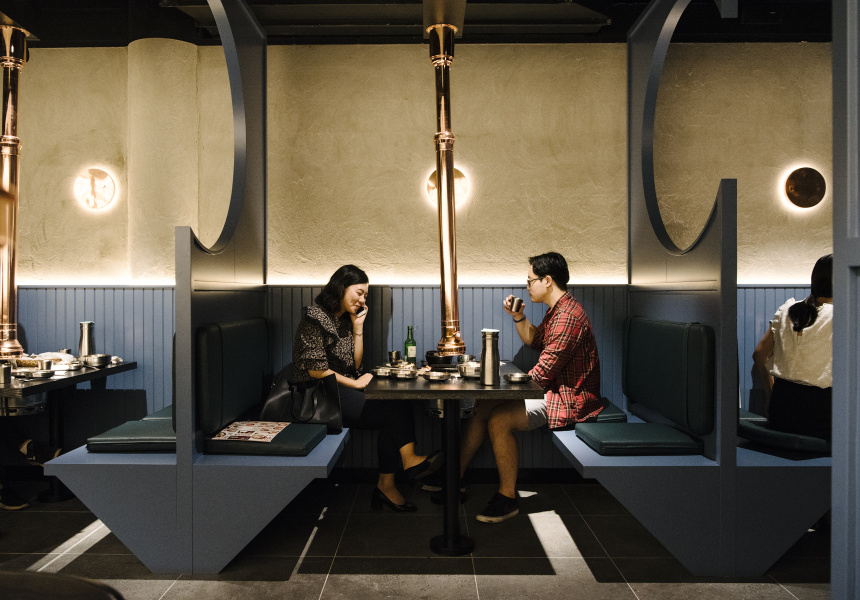 If the decor is anything to go by Kogi, the latest addition to the new Market City 1909 Dining Precinct, is not your average Korean barbeque restaurant. It has an ultra-modern fit-out with steel-blue booths divided by a crescent-moon design, black polished timber and rose-gold-coloured exhausts.

“Food and service are important, but we really wanted to focus on the fit-out because it just enhances the experience,” says Kogi general manager David Bae.

To match the quality interior, the menu offers a selection of premium raw and marinated meats, including different grades of Wagyu. The most premium of the Wagyu range is the loin, which Bae says, when grilled over the hot charcoal, “melts in your mouth”. The other favourite on the menu, and a staple at Kogi, is the galbi (beef short ribs), which is marinated in head chef Hang Jun Chung’s “secret sauce”.

“It’s so hard to find an artisan chef in Korean barbeque. A lot of people think it’s about chopping a piece of meat and putting it on the barbie, but it’s about the way you cut your meat. Kind of like how the Japanese treat sashimi, there’s a certain way to do it,” he says.

Equal attention is paid to the 12 banchan (side dishes) that are offered on rotation six at a time. This includes Korea’s national dish, kimchi (fermented cabbage), which usually involves weeks of fermentation, but Chung’s process only takes days.

“Kimchi is meant to be aged and so it’s somewhat ‘dead’ because it has been sitting around. But the way Chung makes it, the kimchi is alive. The usual procedure involves a six-hour salting period, but he uses this special salt and does it for an hour, so it still tastes fermented but it hasn’t actually been fermented,” Bae says.

But it’s not Korean barbeque without a bottle of soju (distilled rice liquor). At Kogi there’s an extensive list of original, aged and flavoured soju, such as citron and peach.

Opening Kogi hasn’t been Bae’s only project. Soon he’s opening a dumpling bar in Rouse Hill in Sydney’s west, and a Korean-fusion restaurant in Surry Hills next year.