Part Japanese cocktail bar, part cool restaurant, this new addition to Darlinghurst might just be a challenger to Toko’s throne. Toko has held a firm grip over sushi lovers in the eastern suburbs for quite a few years now. The sleek design, date-friendly ambience and sushi smorgasbord have kept it a perennial favourite.

Kaya – a similarly amber-lit, open-fronted restaurant – has opened on Oxford Street, where Thai favourite Rambutan formerly resided before closing earlier this year. This contender to the Toko throne doesn’t hope to match the space and selection of Japanese dishes there, but it does have a little brother vibe that’s unmistakable.

With an ambitious menu featuring snacks such as renkon chips with wasabi mayo, a great little dish called chicken karaage (essentially a much superior bowl of KFC-style drumsticks) and venison tataki. Benches and tall tables provide a pretty relaxed vibe upstairs, while the basement has a second bar and DJ booth for functions.

As for drinks, the ice-cool liquor igloo cocktail has been removed from the menu rather abruptly after a ban on liquid nitrogen was enforced on Sydney bars after the death of an 18-year-old girl in the UK. While it might be a minor setback on the week of opening, Kaya is still promoting the venue as a part cocktail bar, part cool Japanese restaurant. 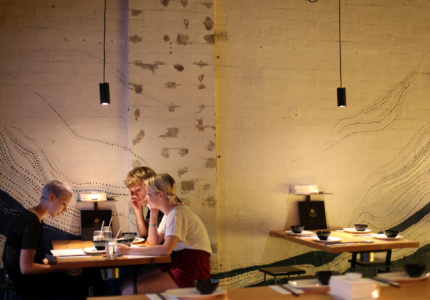