Competition is fierce, how does Huxtaburger think it will rate? 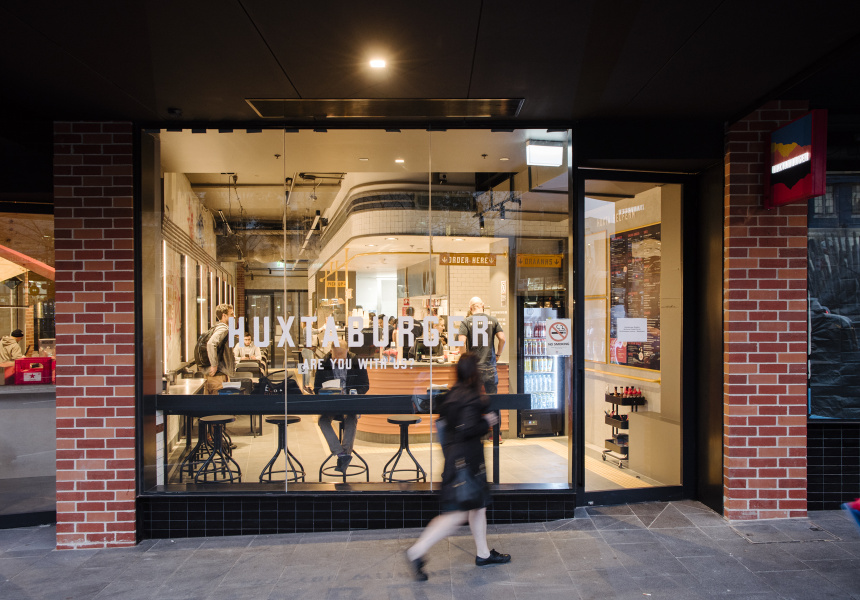 Melbourne burger joint Huxtaburger opens its first Sydney store on Saturday (15th September) in Redfern and even though it’s a new market for the ambitious burger chain, for CEO Matt Fickling it feels familiar.

“We love Redfern; it’s an evolving inner-city suburb that’s shifting from old to new. It reminds me of what [Melbourne’s] Collingwood was like when we opened our very first store there [in 2011],” Fickling told Broadsheet.

Although the vibe of Redfern might resemble Collingwood’s days as a gritty, eclectic suburb, Redfern’s Huxtaburger store is its own beast. “We purposely don’t make our stores cookie-cutter replicas of each other,” he says. “We want to bring in elements of the neighbourhood and engage with the community.”

For example, the recently opened Perth shop is inspired by a swimmer’s lifestyle, while Footscray in Melbourne is about skaters. There’s half-pipe seating and the domed ceiling is reminiscent of an upside-down skating rink. “Redfern Huxtaburger reflects the hustle and bustle of inner Sydney – it’s a commuter’s lifestyle, with elements of an old-school train station [with] subway tiles, graffiti,” he says. “It’s not themed; it’s about subtle references.”

For the uninitiated, Huxtaburger was responsible for kicking off Melbourne’s burger renaissance – in much the same way as Mary’s did in Sydney – and the burgers are named after characters from The Cosby Show. It expanded across the city and has now come to NSW – part of a grand expansion strategy that will see it open 50 burger outlets nationwide in the next five years.

The fit-out may be unique for each store, but the menu is similar at all shops, and the eponymous Huxtaburger is made the same way: with cheese, mustard, mayonnaise, ketchup, tomato, lettuce and pickle piled on a tasty seasoned beef patty. The sauces are made in-house and everything is enclosed between two halves of a soft bun.

When you ask the owner of a burger joint about the most important part of their offering, they’ll often say it’s about the freshness of the meat. For Huxtaburger, it all starts with the bun. “Ours is really soft and people think it’s brioche, but it’s not. The recipe took 12 months to develop. We put a bit of butter on it and toast it on the grill. It’s this crisp, delicious vehicle to lift all the ingredients to your mouth.”

Fickling knows that Huxtaburger is a long way from the first burger joint to open in Sydney. It follows in the footsteps of many excellent established brands such as Burgers by Josh, Mr Gee and Ume Burger, as well as 8bit, which arrived in Darling Square from Melbourne in May.

“There are pretty low barriers to entry for burger shops,” he says. “Anyone can go to a supplier and order meat and ketchup and mayo. But the guys trying to do that long term will struggle. You have to have a commitment to quality and you have to try to emotionally connect with your community. I think we’ve done that really successfully in all our stores. We’re not just trying to make money out of customers, we’re considering how they think and feel … We use awesome, quality ingredients to create familiar flavours people are nostalgic for. But we take it to another level.”

This article was updated on November 16, 2018. Menu items may have changed since publication.