A new restaurant and bar from the Tokyo Bird and Osaka Trading Co team. Nikkei is the latest restaurant and bar by the team who brought us Tokyo Bird, Osaka Trading Co and Bancho bar, and as the name suggests, it’s all about nikkei food.

The term nikkei is used to describe Japanese diaspora communities, but also the melding of Japanese techniques and flavours with Peruvian produce. (There’s been a Japanese community in Peru since the late-19th century.) “Lots of people are saying we’re Japanese-Peruvian fusion, but we’re not. We’re influenced by a cuisine with a 100-year history,” says Japanese-Peruvian manager Marco Oshiro Giron (ex-Tokyo Bird, Lucky Suzie and Black Bar & Grill).

At Nikkei they’re not looking to replicate exactly what you’d find in Peru, but use the cuisine as a starting point for something new. What that means are dishes such as swordfish ceviche; calamari, fried egg and pickled cabbage on a bed of pureed roast banana; and a tuna tartare sitting prettily atop a dome of sweet potato, leek and Japanese-style pickled plums. These simply plated, exploratory concepts are designed not to be different just for the sake of it, but to be delicious.

At least, that’s how chef Lucas Cerulla David describes it – a Brazilian who’s been cooking Japanese food the last few years at Osaka. “All my career I’ve been cooking French, Japanese, Chinese, Korean. Now I get to cook my food, what I want to cook, and I’m excited,” he says.

While David has been given almost complete freedom over the edible portion of the experience, Phil McElroy (ex-Mona and Firedoor) and Giron are in charge of the drinks. “I want to showcase a certain style: coastal wines. They have a natural saltiness and the acid has a crunchiness. It’s very texturally layered, which accompanies the food. There are a lot of Australian wines and a great range from south Chile,” says McElroy, the group’s sommelier.

Giron makes us a cocktail with pisco, house-made chica morada (a Peruvian purple corn drink), yuzu and plum bitters. “One of the cocktails may have cumin-spiced quinoa milk but it’s approachable in the way it looks and drinks,” he says.

Giron, McElroy and David are also the builders. “The trick is if you get everyone to help you build a table or a chair, everyone cares more because they physically built it,” says Jason Ang (one of the owners, along with Christopher Ang and Tina Wing Kee). “When Phil’s mum came in to see the place, the first thing he showed her wasn’t the restaurant, it was the [bathroom] lock he made.”

You’d never think it was a mostly improvised build done by friends and family – see the long, communal timber table cut from a single tree, the curved bar laid with laser-cut stone, the three-metre tiles behind the open kitchen.

Nikkei has taken over the former Bodega space (the tapas restaurant recently moved to a new place) and it's looking very different. The internal wall has been knocked down and now the rooms are divided by shelves filled with wine and restaurant paraphernalia. It is, though, still channelling those South American vibes. The bigger dining area will have salsa, reggaeton and fun, while in the smaller space they’ll pump the music, dim the lights and run it more like a bar.

This is probably why it feels different to other venues. “I want people to learn that the word restaurant comes from the word ‘to restore’. I think that idea has been lost. Our job isn’t just to feed you and serve you drinks. Our job is to restore you to good health; even if a person is rude, that’s our call to action. And to correct whatever went wrong with their day and give them a good night,” says Ang. 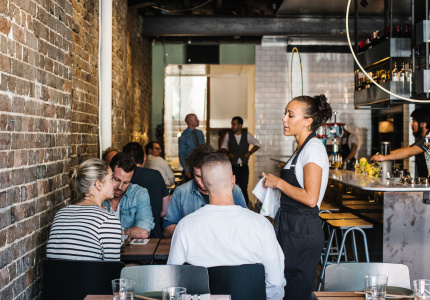