A Twist on Japan's Best-Known Cocktail

When a Whisky Highball meets ginger and cranberry. Top with ginger, ice, a lemon wedge and a cocktail cherry. One of the best-known cocktails in Japan is a simple Whisky Highball. Despite the drink’s simplicity – it consists only of whisky, ice and soda – the Japanese turn its preparation into an art form.

Making this drink is a careful ritual of building ice, whisky and soda in a chilled highball glass. It should be stirred at precise moments during the build, and there are rules about the placement of the bar spoon, and the quality of the ice (hand-cut, no bubbles).

At Supernormal, Andrew McConnell’s Japanese-leaning diner in Melbourne’s CBD, there’s a cocktail called Whisky Business. It’s not currently listed on the menu, but they’ll make it if you ask. It’s a play on a Whisky Highball, although with a Singleton Spey Cascade Scotch whisky base, and added ginger and cranberry elements.

There may be less ritual involved in the making of the Whisky Business, but Leanne Altmann, wine buyer at Supernormal, says the flavours in its version are “still quintessentially Japanese”. It pairs beautifully with almost everything from the raw bar at Supernormal, in particular the smoked beef tartare with clam mayonnaise. It also suits its pan-fried pot-sticker dumplings; twice-cooked duck with plum sauce … and karaoke.

Other core Japanese ingredients and flavours include shiso (perilla leaf in English, a peppery herb); yuzu (a Japanese citrus fruit); umeshu (plum wine); the Japanese spirit, shochu; and, of course, sake. All of these are found in cocktails all over the Supernormal menu and at other Japanese restaurants such as Hihou and Izakaya Den.

Sydney’s Cho Cho San uses a yuzu liqueur in many of its cocktails, which bar manager Adam George says is “kind of like a [Japanese] limoncello”. It adds a tart sweetness to cocktails such as its Louisiana Sawa made with Tanqueray gin, yuzu liqueur, lemon and soda.

Because Japanese cuisine is so delicate, lighter cocktails (such as Cho Cho San’s Kimono, made with Tanqueray gin, sake and cucumber) tend to match it better, especially with dishes such as sashimi, and even dishes such as the lightly fried agedashi tofu. “You want something nice and fine that allows you to pick up little details in the drink, but that’s not overpowering,” says George.

Cho Cho San’s own version of a Highball – the 500 Mile Highball – is made with Aragoshi Umeshu and Johnnie Walker Blender’s Batch Red Rye. The umeshu gives it an earthy flavour, says George, so stands up against heavier dishes such as its Wagyu with shallot.

“Like all pairings, it’s about not getting too intricate, or overcomplicating things,” he says.

Method:
Shake and strain into a highball glass. Top with ginger ale and ice. Garnish with a lemon wedge and cocktail cherry (we love La Salamandre Cerises). 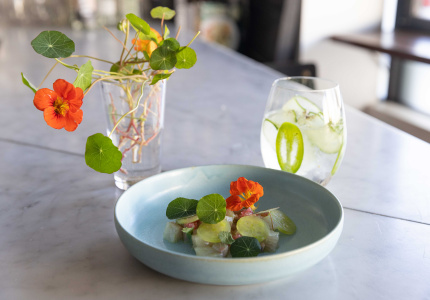