From Italy with Love at Pasta Emilia

With its sunlit hall, communal wooden tables and well-ordered shelves housing jars of homemade sauces and olives, Riley Street’s Pasta Emilia exudes the classic Italian food and hospitality that we all love so much. 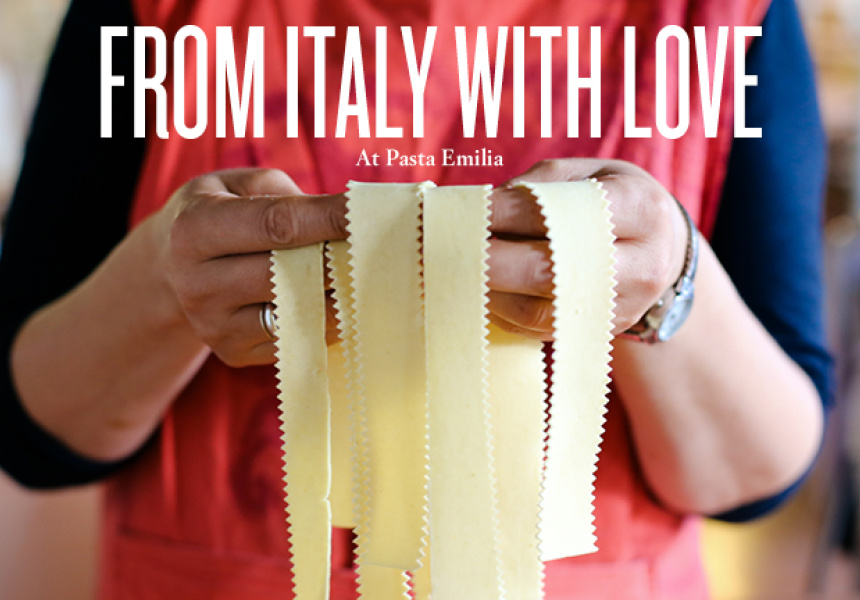 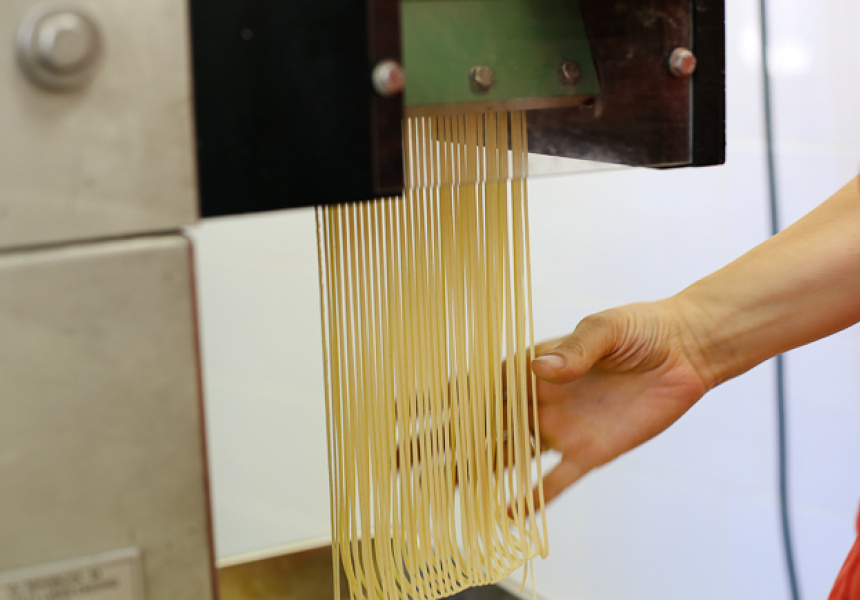 Pasta Emilia co-owner Anna Maria Eoclidi radiates such a sense of warmth, you’ll gladly watch her work for hours as the afternoon shadows grow longer outside.

Eoclidi grew up in a small village in the Emilia-Romagna region, which happens to be the pasta-making capital of Italy. Her grandfather was a farmer and winemaker so connected to his craft that he timed the bottling of his wine around the cycle of the moon.

This connectedness to nature is ubiquitous for Pasta Emilia, which found its beginnings in Bronte in 2004 as a dedicated organic pasta and sauce business. After selling religiously at local farmers’ markets and through a select group of fine food retailers, in August of 2012 Pasta Emilia found its new home on Riley Street. [fold]

Here, the words organic and biodynamic are not trendy calling cards (and there’s an active and worm farm downstairs to prove it). Eoclidi believes that food’s mass production and manufacturing nulifies the importance of ingredients and their meaning. “It’s important for us to have a relationship with the farmer,” says Eoclidi, who sources her ingredients from biodynamic farms from the Tablelands to Tasmania. “When we can, we really like to support them. Otherwise, we use small farmers,” she says.

Biodynamic is a step above organic. Pioneered by German philosopher Rudolf Steiner in the 1920s, it’s a holistic method of farming, which values the health of the soil and its interrelationship with the wider ecosystem.

Eoclidi’s cream supplier, Elgaar Farm are fifth generation German milk farmers. “[The cream] is just like my grandfather used to make – you open the lid and there’s a thick amount of cream stuck to the lid,” says Eoclidi. “They really care.” And with glass-only packaging, which they ask customers to return after use, as well as the fact that each cow on the farm has a name, it shows.

Pasta Emilia’s ricotta arrives from Mungalli Creek in Northern Queensland. “They use full-cream milk to make their ricotta; it’s completely different from any other ricotta we have tried,” she says. “We are very lucky.”

With ingredients this special, you’ll be rightfully tempted to take some of the produce home with you. Feast your eyes on Pasta Emilia’s specialties: traditional flat pastas like fettuccini and pici, as well as filled pastas like ravioli and tortelli (large raviolis native to the Eoclidi family’s Italian home), with fillings including nettle and gorgonzola, pumpkin and mostarda, kale flowers and pecorino, beetroot and chevre and duck and truffle. It’s important to note that ingredients are generally chosen based on seasonality.

The factory area responsible for these delights doesn’t keep its knowledge to itself. Working with other likeminded people with a passion for good, healthy food, Eoclidi has opened her kitchen to a cheesemaker and a naturopath specialising in probiotic drinks, who are soon to be joined by a pickling and preserve-maker, all working with organic ingredients.

Of course, it would be remiss not to mention pasta-making. With pasta varying so much from region to region (it differs from the type of flour used, to the shape), Eoclidi invites other people from Italy and her trainees to make something from their region.

Pasta Emilia’s café (or mensa, which is a typical Italian dining hall) is open, but still in development. “Mensa is a place where people can go and eat together. They have very simple meals – not complicated or sophisticated – but homemade and genuine food.” On the menu will be Eoclidi’s homemade pastas, salads and for breakfast, a couple of eggs and coffee.

Walking into Pasta Emilia, you feel nourished and comforted. Find your refuge here in the coming winter months.