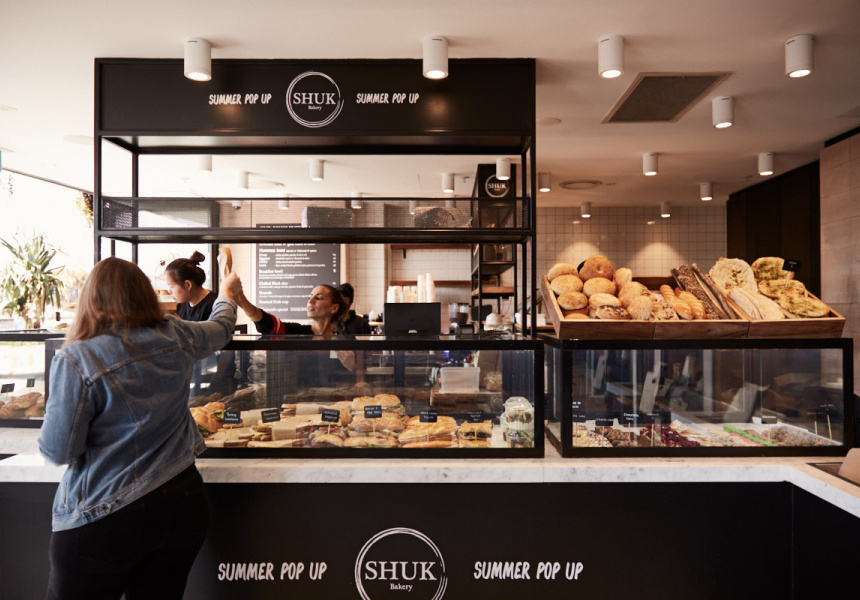 Each time Yoni Kalfus has opened a new outpost of Shuk it’s always been set away from the crowds. The original Shuk launched on a residential street in North Bondi in 2013, and more recently its Chatswood and Elizabeth Bay stores have opened away from main drags.

But now Shuk has opened its first pop-up, and it’s right across from Bondi Beach.

“From what I’ve seen there are some 50,000 to 70,000 people who will walk by this little pop-up [each week],” owner Yoni Kalfus tells Broadsheet. “So we want to cater to those people. We’ve never done it before and we want to see how it works.”

While the pop-up is scheduled to stick around until the end of February, Kalfus reckons it will last longer – or at least, it won’t be the last Shuk pop-up. “We’re looking at doing pop-ups in a few locations,” he says.

Like Shuk Bakery at North Bondi, the pop-up has a selection of breads and pastries on display at the counter. There’s limited seating, so the rest of the menu has been designed to be eaten on the go. There’s a variety of sandwiches made daily, including Shuk’s popular bacon and egg baguette.

Otherwise, opt for one of the hummus bowls with flatbread that are available in four different flavours: classic (tahini and pickles), eggplant, falafel or lamb. On weekends Shuk’s popular shakshuka makes an appearance.

As summer gets closer, Kalfus says he’s considering introducing malabi, a traditional Israeli dessert made with coconut and rose syrup. “It’s a bit like a panna cotta and most places in Israel in summer serve it.”

There are also plans to introduce an online ordering system so beachgoers can order their food and pick it up from a collection point on the beach.

Kalfus says the menu will change regularly. “We get more excited when things are constantly changing. Because it’s a pop-up, we’ll change and adapt to what people want,” he says. “And what we want to do is have fun.” 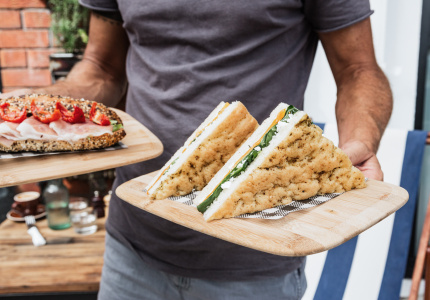