One of Melbourne’s most celebrated coffee roasters opens in Sydney. 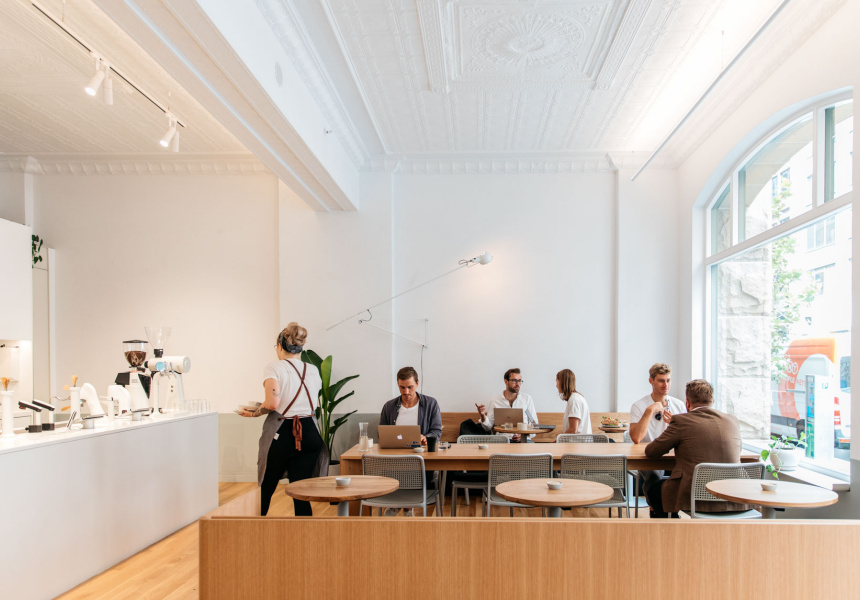 Industry Beans is buzzing: it’s 2pm on Monday – the official opening day of the cafe’s first Sydney venue – and a queue is starting to emerge from the door. “I think Sydney loves coffee more than we anticipated,” co-owner Trevor Simmons tells Broadsheet.

But he says there’s an easy way to avoid the queue: “Download the app.” You can use it to order ahead and earn loyalty points, and you’re rewarded with $5 credit for downloading it. “We’re trying not to take away the personality of coffee; we’re trying to make it easier,” says Simmons, who runs Industry Beans with his brother Steven.

Industry Beans is all about fast specialty coffee. Simmons says the aim is to eventually have all coffees made within three minutes (the cashless counter helps speed things up too).

Housed in a heritage-listed building on York Street, Industry Beans’s sleek, minimalistic and very white signature design is thanks to Melbourne-based firm DesignOffice. It features a large modular coffee bar customised with purpose-built La Marzocco Modbar coffee machines (each machine sits beneath the counter and the coffee-dispensing taps sit on top).

The coffee coming from those spouts are Industry Beans’s own roasts and blends of single origin beans. Aside from the regular milk-based and black coffees, the cafe has developed a following in Melbourne for its cold-brew bubble cup, which combines cold-brew coffee, coffee-soaked tapioca pearls, and a house-blended condensed-soy milk. Also popular is the Fitzroy Iced, made with cold-brew coffee, milk and wattleseed and panela syrup.

Open every day, the kitchen at the 20-seater joint is headed up by Kristy Wood, former head chef of The Rook. She’s using molecular gastronomy to incorporate coffee into the dishes. A coffee-rubbed Wagyu burger is available at lunch, and for breakfast, coffee caviar comes served with the cinnamon-dusted brioche and the crazily-named fruit sashimi (which comprises compressed watermelon, citrus raindrop cake, cherry and blood-orange-cured papaya served with a wattleseed and pepper leaf rice crisp and coffee chaff milk jelly). The cafe has also collaborated with Bakedown Cakery to create coffee-infused chocolate truffles.

“The idea is to show the flexibility of coffee. We don’t go too overboard, it’s genuinely part of the dish,” Simmons says.

While the menu changes seasonally and most of the dishes have been borrowed from their Fitzroy outpost in Melbourne, there are some dishes available only in Sydney like the green bowl, the baguettes and the omelette.