It comes with slow-cooked pork chashu and cheese if you want it, and there’s a limited-edition king prawn option. Plus it’s serving a curry-filled bread dumpling rolled in panko crumbs and fried. 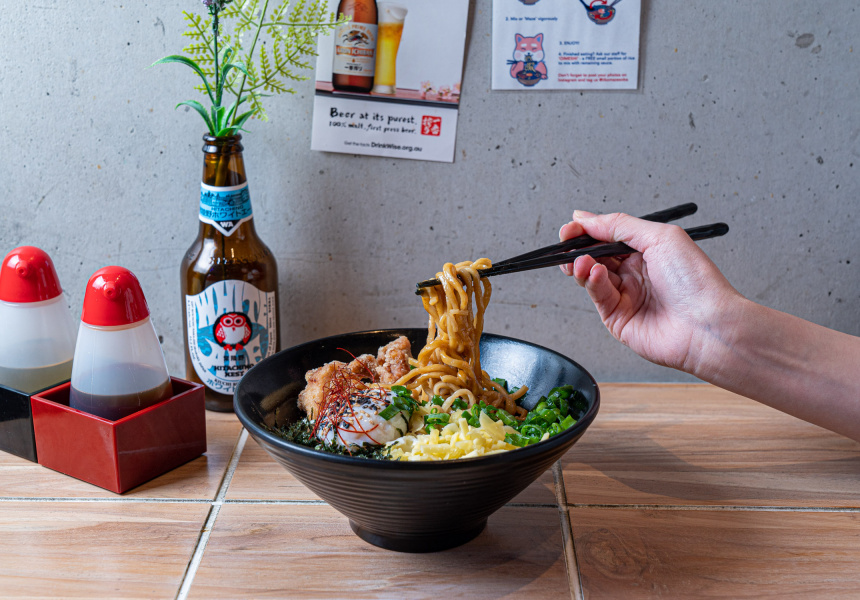 “Mazesoba is the younger sibling of ramen,” says Michelle Widjaja, owner and chef at Iiko Mazesoba, which opened late last year in Haymarket’s Darling Quarter, near the light-rail stop at Paddy’s Markets. “There are noodles and toppings, but instead of broth, we use sauce.”

In other words, it’s a saucy, brothless ramen.

The sauce, called soy tare (“tah-reh”), is a blend of sweet, sour and salty flavours that coats the noodles. At Iiko, they recommend customers add a swirl of chilli oil and house-made kombu vinegar before digging in. The cheese mazesoba comes with a mix of cheese and onsen egg. There’s a vegan option too, as well as a limited-edition king prawn mazesoba.

Maze (“mah-zeh”) in Japanese means to mix. “Noodles, sauce, toppings – you mix everything together. It’s popular in the warmer months in Japan, especially among salarymen because without broth, you don’t get soup stains on your shirt,” she explains.

Iiko’s springy, chewy noodles are made in-house using a $20,000 machine Widjaja bought from Japan. The noodles, which are made in a similar fashion to pasta, are thicker than those you’d find in ramen, giving them more surface area for the sauce to coat. While she says you wouldn’t describe the noodles as al dente when cooked, there is a slight resistance to them when you take a bite.

“I did my training in Osaka with a ramen sensei,” she says, “and when we opened here, he came to Sydney to train me and some kitchen staff to make the noodles.”

In theory the noodles should keep a few days before serving, but Widjaja says they’ve never had to test it. “Pre-Covid we went through almost 30 kilograms of dough a day.”

The tender pork chashu is also made at Iiko. “It’s cooked over four hours, and the marinade that comes with that is really flavourful and porky, so we use it for our signature sauce,” she says.

It’s all part of Iiko’s anti-waste philosophy. “Iiko means ‘good boy’ or ‘good girl’, and our philosophy is to do good by everyone, including the environment. That means doing things to reduce our waste, like using the marinade and making noodle offcuts into a fried snack.”

But it’s not only the food that’s attracted people to this inner-city eatery. During Covid Widjaja recruited one of her servers, actor Tian Tan, to make instructional cooking videos for the venue’s Instagram account.

“When Tian started working for us in front of house, I was really confused because people kept asking to take pictures with him,” Widjaja says. “Then I realised he was in a famous viral dating video from years ago. I thought he would be perfect to help me with the cooking videos.”

Tan has a natural comedic charm. Nothing is edited out, including his mispronunciations and the sound of Widjaja laughing as she films. “You’ll need two tablespoons of ‘wor-chest-shire’ sauce,” he says, measuring out the ingredients.

Now that restrictions are lifting, delivery is limited to one day a week and in-store business is slowly picking up again. Widjaja has been working on new products, like Iiko Kare, a variation on the Japanese snack kare pan, or curry bread. It’s a filled bread dumpling, rolled in panko breadcrumbs and fried. The Iiko version is filled with chashu pork and house-made sauce.

Rather than make their own bread, Widjaja reached out to her good friend and former boss, Andreas Rost, of Organic Bread Bar.

“I asked if we could buy dough from him to make Iiko Kare as a collaboration. We’re trying to do more with other businesses to be creative with the things we have. In these times everyone is short on resources, but that shouldn’t stop us from making something exciting.”