Governor Macquarie once worked from the historic terraces that are now dining rooms. Eat among the sandstone or under the Japanese maples, with food by a chef whose resume includes Michelin-starred Tokyo restaurants. Squeezed between the imposing, modern Governor Phillip Tower and a line of charming, heritage-protected sandstone terraces, is a new CBD dining courtyard. Raphael Place is not easy to find. Tucked off Philip Street, it’s on a narrow lane leading to a space that was once the stables of Sydney’s first government house. There you’ll discover a small-scale food precinct that consists of an Italian eatery called Raphael’s and a Japanese-French diner, Artistry Garden.

Governor Macquarie once worked from the historic sandstone terraces, which act like a cocoon protecting diners from the bustle and noise of the CBD. The courtyard is dappled with sunlight that shines through Japanese maples, making it a very pleasant spot to dine.

At Artistry Garden, diners chat over plates of purple-rice congee at breakfast and Wagyu bresaola and Roquefort at dinner. It’s an interesting mishmash that, while it might seem discordant at first, reflects owner Kesra Ceyhan’s respect for the simplicity of Japanese ingredients and the traditions of French cooking.

“I fell in love with Japanese food when I was travelling,” says Ceyhan, who says he has visited 93 countries and counting. “In Japan, you could have a simple knife-cut noodle and egg yolk, and it would be amazing. French cooking is the opposite. It takes a lot of technique … and love, and butter,” he says, laughing.

Two years of planning and negotiations with council went into bringing the all-day diner to life, mainly because the terraces are of heritage significance. The government offices have been turned into dining rooms that show off the original sandstone, and in the courtyard there’s a bar with an under-counter espresso machine by Modbar.

At lunch or dinner, start with a palate cleanser of exquisite niji-iro (rainbow-coloured) sashimi finished with puffed wild rice, crisp saltbush and a citrusy shiso ponzu dressing. For main, it’s a toss up between the barramundi (its firm flesh holds up well with an umami-rich sansho pepper-bisque) and the dry-aged, bone-in Black Angus rib eye cooked over the Josper charcoal grill. If you want something simpler, there are toasties, such as grilled chicken with rocket pesto, gruyere, spinach and capers.

The extensive vino list is dominated by boutique French wines. The use of a Coravin means fancier wines are available by the glass. There are also pages of spirits to choose from, including tipples like mistelle (fermented white wine with added brandy) and sparkling sake. 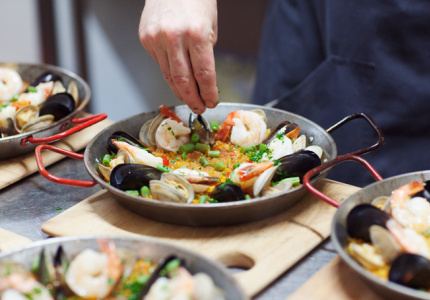