We’re calling it – this is Sydney’s best toastie. 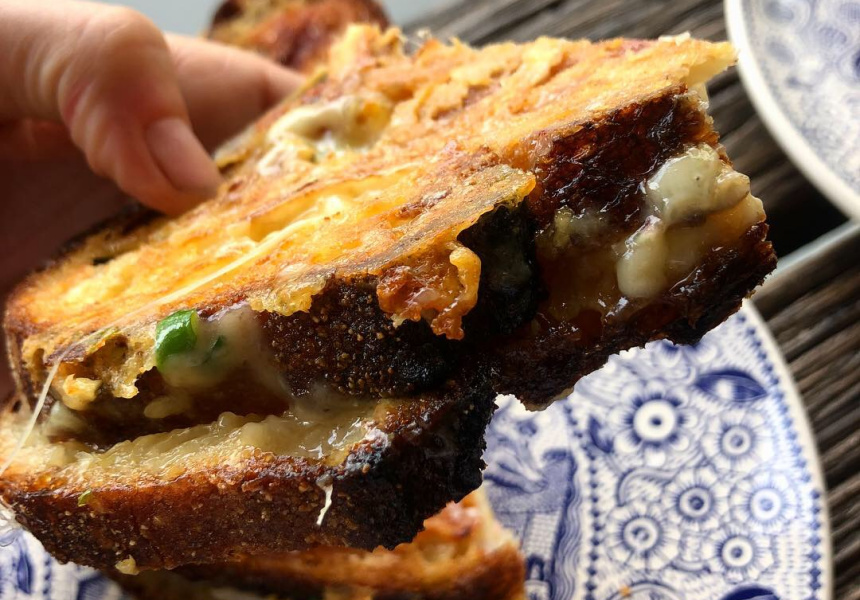 Four. That’s how many cheeses this magnificent toasted sandwich has. One of them is on the outside to give it not only a spectacular, golden crunch, but also plenty of those crisped-up bits of escaped cheese that form during the grilling process.

Sure, I don’t often meet a toasted cheese sandwich I don’t like, but this rendition is indelible.

Lawson – who has an encyclopedic knowledge of the stuff – refined it at Kings Cross Markets, at London’s Borough Markets and in her kitchen, before opening her cheese and cheese-accoutrement shop just off Darlinghurst Road.

Her trick is simple: play to each cheese’s strength to create a sandwich that’s a balance of flavour and texture. And just use a lot of it.

With a larder of options to choose from, she changes up the four that go in, but there is always a cheddar for its sharpness and a raclette for its melting properties. She’s also been known to add a Swiss Gruyere, a fontina from Italy, the Milawa Cheese White from Victoria’s High Country, a Swiss challerhocker (pronounced “holler hocker”, which means “sitting in the cellar”) or a buffalo-milk cheese from Victoria’s Shaw River, the Annie Baxter Special Reserve.

If that’s a lot of talk just know this: it melts together to create a molten ooze of deliciousness.

Lawson gets sourdough from Pyrmont’s Pioik Bakery. Slices of it are stuffed with cheeses and then toasted in an off-the-shelf grill. It’s a good choice because the crust gives a good amount of chew but it isn’t tough or hard to eat.

There is an option to add onions, ham and sometimes jalapeños; my recommendation is definitely enhance yours with the onions for their delightful sweetness. And when Lawson asks if would you like a sprinkle of salt on the outside, say yes.

Because the $12 toasties aren’t the main game here – Lawson only makes 20 to 30 of them a day – it means you’ll need to go in early or keep trying your luck (and if you do miss out, you can buy an amazing wedge of the stuff to take home). “The shop is really a cheese shop, with the bonus of grilled cheese sometimes,” says Lawson.

Trust us, it’ll be worth it – a visit to this grilled-cheese pusher is essential and you too will think of nothing else after trying one.

“I Can't Stop Thinking About” is a series on Sydney dishes Broadsheet Sydney editor Sarah Norris can't stop thinking about.