I Can’t Stop Thinking About: The Chicken Parma at The Unicorn Hotel

A crisp chook disc slathered in sauce, ham and cheese that makes losing at trivia bearable. 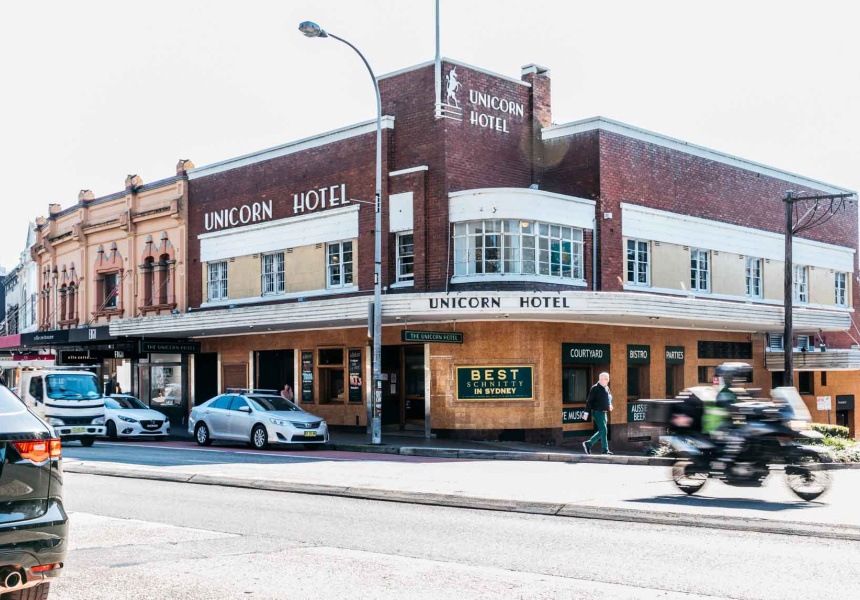 The chicken parmigiana at The Unicorn Hotel in Paddington is without doubt the best parma I’ve ever eaten or am likely ever to eat. It’s ruined me. Crumbed chicken dishes will never be the same.

Usually I work in Melbourne, but recently I was in town visiting the Broadsheet Sydney office. In the name of “team bonding”, we all resolved to go to trivia at The Unicorn.

We had our drinks, we had our team name (“The New Masterchef Judges”, both a funny and topical name at the time) and now all we needed was an order of pub grub.

For me, “pub meal” is a synonym for “chicken parmigiana”. As a young man in a pub-obsessed country, going for a parma is what I actually mean when I bump into someone and tell them, “We should really catch up for a coffee soon.” I’ve eaten a lot of those crisp chook discs covered in Italianesque Napoli sauce in my time, and it’s rare for one to stand out and stay with me long after the final breadcrumb.

It’s been nearly four months since that cool July day, and I have not been able to get The Unicorn’s parma off my mind. Here’s a quick snapshot of this thing: almost bigger than my plate, golden like the hour before sunset, with crinkle-cut chips (yes) and cubed ham (interesting). Let me set the scene.

Trivia’s started, and things are going well. Round one always has the easy questions. Play it cool; let your colleagues have a few quick wins. Everyone’s happy. In between rounds, we discuss what makes a good parma.

A parma, I argue, is defined by what it isn’t, rather than what it is. There are five crucial chicken-parma components: chicken (of course), the crumb coating, the Napoli sauce, the cheese and the ham. Mess one up, and you’re out.

Murmurs of agreement ripple around the table. Clearly I’ve said something that sounds smart. I push on.

“Whenever a pub or restaurant tries to make a parma into something it’s not, the result is bad,” I say, convincingly .

“What do you mean by that?” says Sarah Norris, editor of Broadsheet Sydney. Damn, someone just asked me to back up a claim.

“Well,” I clear my throat. “I’ve had parmas that have been classed up by swapping prosciutto for ham and ones that have gone way overboard with the toppings [onion rings and barbeque sauce] … neither work.”

Nods of approval. Jeez, tonight’s going really well. Let’s just hope this parma is as good as we are at trivia (which is to say, very good).

We get our food at around the halfway mark. You know you’ve ordered well when everyone at the table looks jealously at your plate.

The first thing I notice is the parma’s looks (I’m shallow, I guess). I guarantee it’s different to any parma you’ve seen before. Where most consist of a single chicken breast – butterflied and pummelled flat – The Unicorn’s comes with the drumette (the cute miniature drumstick wing that’s usually removed from the breast) still attached.

The second thing I notice is – oh hang on, they’re tallying the trivia points.

We’ve been neck and neck with the team across the room all night, a Herculean effort considering we’ve had a team of five and there are 12 of them. We lose by a point. Twenty-eight to 27. Robbed.

But this isn’t “I Can’t Stop Thinking About: The Overly Lax Enforcement of Trivia Etiquette at The Unicorn”, so I’ll get back to describing this parma. I just think if you have a trivia team with more than six people in it, you shouldn’t be proud of yourself for winning. Of course you nailed the music round. What are you answering, like one question each? Where’s the fun in that? But seriously, back to the point – I’m not (that) salty.

You know what is salty? That wonderful parma. On top of the breast-and-wing combo is the Napoli sauce. Bright red and tomato-y, a bit of garlic. Perfect. Next up is the ham and cheese. Ever stuck your blunt pub cutlery into a parma for the first cut, only to drag your slice of ham off, taking all the cheese with it? We’ve all been there. It’s a classic case of poor ham and cheese assimilation.

The Unicorn’s solution is simple, but ingenious, and I’d like for it to become standard practice in pubs across the land. Ditch the slice of ham – dice it into cubes instead. The cheese and ham become one seamless blanket of salty dairy and pork.

This parma also comes on – not next to – a generous serving of crinkle-cut chips, with a wedge of lemon.

That I think about that fateful July night not as “Sad Trivia Runners-Up Night” but as “Great Chicken and Team-Bonding Night” speaks to the calibre of that meal.

Anyway, trivia’s a stitch up – go to The Unicorn and order the parma. 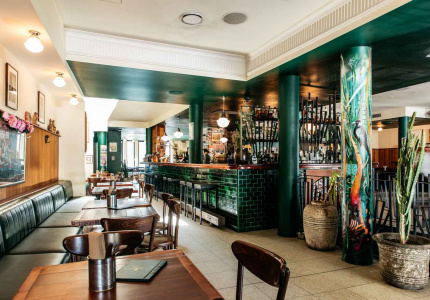 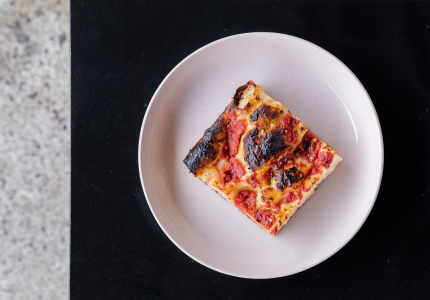