Like many Sydneysiders, the Quigleys fell hard for the eatery so they decided to bring it to the city. It’s open for breakfast, lunch and dinner, and the veggie chips with chipotle aioli are already a local fave. 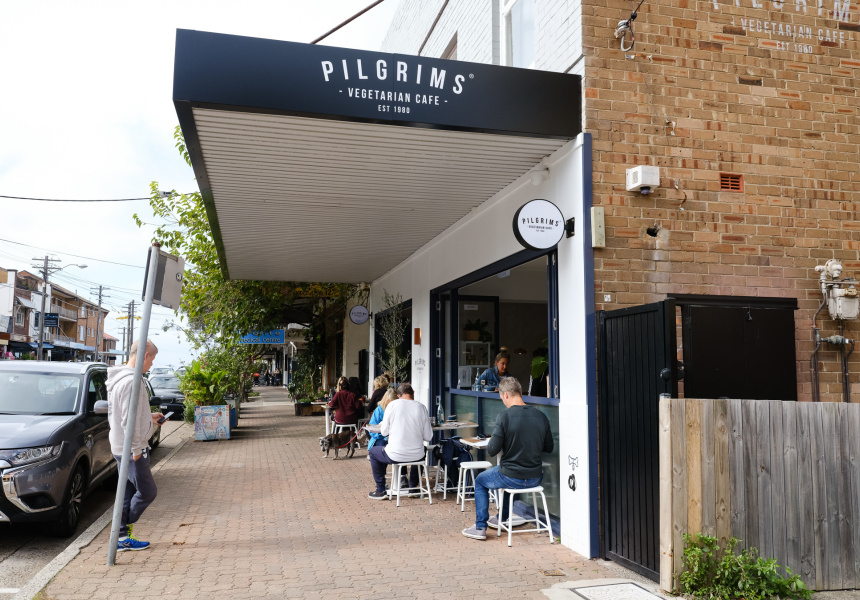 There’s a special place for Pilgrims in the heart of many Sydneysiders who have dined in the popular south coast cafe. Tell anyone you’re going to Milton and they will inevitably say you need to visit the plant-based eatery.

One family with a particularly soft spot for Pilgrims is the Quigleys. They are born and bred in Bronte, in Sydney’s eastern suburbs, but for generations have had a house in Mollymook and are long-standing customers of the coastal diner. Now the three siblings, Ashlea, Jade and Ben Quigley, along with their partners Nick Bardetta, Luke Stewart and Deb Quigley, are standing on the other side of the counter, having opened their own Pilgrims in Bronte.

“None of us have a background in hospitality,” Bardetta tells Broadsheet. “But when we started conversations with the south coast owners, I think they felt a level of comfort with us, knowing we understood Pilgrims.”

It’s not the first time someone has brought a part of Pilgrims home with them. Since opening in 1980 (it’s celebrating 40 years this year), other Pilgrims cafes have opened in Huskisson, Corrimal and Cronulla, as the name slowly makes its way up the coast.

In fact, a number of the south coast staff – out of work due to coronavirus – have recently come to the eastern suburbs venue to work. “We’ve really been able to bring the brand to Bronte in more ways than one,” says Bardetta.

Bardetta reckons the menu is 95 per cent the same as the original, and it’s still completely vegetarian. What’s not the same is the sourdough – it’s sourced from Iggy’s next door – and there’s a new haloumi burger with fried onion, tomato, Pilgrims’ greens, hummus and Pilgrims’ chilli jam. It joins the Harvest burger, which is huge and heaped with a mixed-grain patty, fried onion, lettuce, carrot, beetroot, tomato, cucumber, sprouts and special sauce. The burgers all come as either a wrap or a bowl, and vegan versions can be prepared too.

One addition Bardetta is particularly proud of is the veggie chips with chipotle aioli. “They were actually the first thing to [sell out on our first day],” he says.

The light and airy fit out was designed by Deb’s interior architecture firm Lane & Grove. The cafe’s open for breakfast, lunch and dinner, and at night it takes a Mexican turn. You can order spinach and ricotta quesadillas sautéed in Mexican spices, and enchiladas served with refried potatoes and brown rice. It’s fully licensed, and Bardetta says he can’t wait for the 80-seat venue to be full of family and friends when the corona virus restrictions fully lift.

“Most of our team has been down the coast to the original, and so has every second person that walks in here,” he says. “Everyone has their own unique connection to Pilgrims, it’s what makes it so special.”