Every day 350 kilograms of watermelon go into making Sydney’s most famous cake. Find out how they do it. 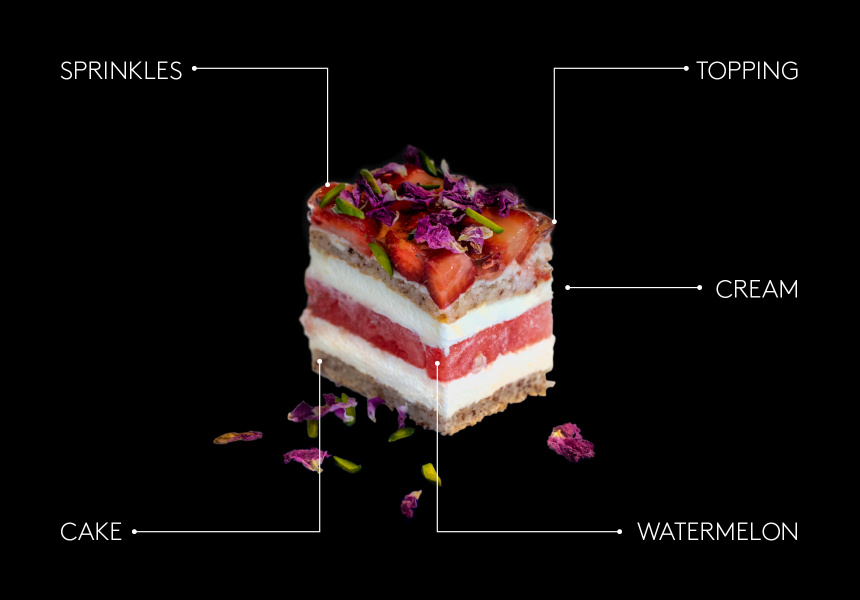 This dainty strawberry-watermelon cake was created as a one-off for a friend’s wedding, with a simple yet ambitious goal: to be as romantic as possible. Black Star founder Christopher Thé, the cake’s creator, calls the resulting hype “a phenomenon” and credits it to Instagram’s rise in 2012.

“At the end of 2011 we were doing maybe 30 portions a day. I even thought about taking it off the menu. By the end of 2012 we had lines down the street outside our Newtown shop,” he says.

Nowadays Black Star’s production kitchen in Moore Park begins work on the following day’s cakes at 7.30am and makes up to 6000 portions. It’s really no wonder this cake continues to rule feeds more than a decade after its debut.

Cake
These airy almond dacquoise (nut meringue) layers have an incredibly delicate texture that can only be achieved by mixing by hand. Or to be more precise: by using an entire arm, covered in a bicep-high rubber glove, plunged into a 60-litre mixing bowl. The resulting cake, though light, provides a robust foundation for all that cream and fruit, and adds a distinctly nutty flavour. “We use almonds with the skin on for the almond meal,” Thé says, “so it’s quite earthy, too.”

Cream
Thickened cream is whipped with sugar, rose water and a little gelatine until firm, then the production line’s “cream team” spreads it liberally across the large cooled sheets of dacquoise.

Watermelon
Thé and his team hit Sydney’s wholesale markets every morning to collect 350 kilograms of watermelon. Choosing the right fruit is an art: not ripe enough and a fork won’t make it through the cake, too ripe and the watermelon starts to crack. The melons are sliced with a large mandoline, macerated with sugar and rose water for 30 minutes, then drained and patted dry. The final Tetris-like challenge is assembling the unevenly sized slices into a single, gapless layer.

Topping
Halved strawberries and crimson grapes are strewn across the top of the cake, then set in a slightly sweet, slightly acidic jelly. The large cakes are cut into individual portions using a fancy ultrasonic cutting machine. Its blade vibrates at high frequency, slicing through even the most delicate elements cleanly, resulting in an appealing, abstract jumble of fruit. “It’s those random shapes I find really pretty and interesting,” Thé says.

Sprinkles
The cakes are transported to Black Star’s three other stores in Rosebery, Newtown and the CBD, where they’re finished with a sprinkling of Iranian rose petals and slivered pistachios. But even this finishing touch can be complicated. “Getting ingredients from Iran can be a struggle with Trump’s trade sanctions.”