How It’s Made: Bistecca’s Beef-Fat Candle

Every meal at this dim Italian steakhouse starts with an edible candle and house-made focaccia for dipping. Here’s how they do it. 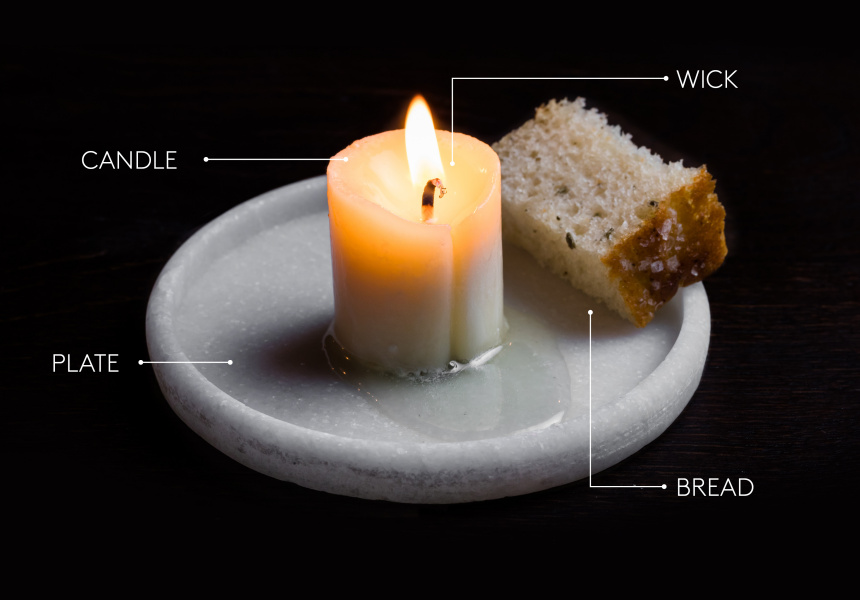 For a restaurant known for just one dish – Tuscan-style T-bone steaks – Bistecca is full of surprises.

Step into the windowless (and mobile-phone-free) dining room, and as you sit at your candlelit table, you’ll be handed some bread and encouraged to eat the melting liquid pooling beneath the candle’s burning wick. What looks like wax is actually excess beef fat taken from the thick-cut steaks you’re about to enjoy. The idea isn’t totally original – London’s Michelin-starred Restaurant Story began serving beef-fat candles in 2013 – but that doesn’t detract from the childlike whimsy it induces. Head chef Pip Pratt (ex-Bentley) and his team make more than 300 of these each week.

Candle
Fat cut from the short loin Bistecca uses for its chunky steaks is rendered down to a liquid and infused with rosemary and confit garlic in a saucepan over a period of hours. We can only imagine how good the kitchen smells during. Duck fat and vegetable oil are added for consistency and burning speed, then it’s all poured into lengths of PVC pipe and refrigerated until needed.

Wick
Made from soy-based threads, the food-safe string that runs through the candle is cut to a specific length to produce the perfect sized flame.

Plate
As well as creating the restaurant’s interior, design firm Tom Mark Henry was charged with finding the perfect tableware for each of Bistecca’s dishes. This shallow marble plate with a slight rim was chosen to prevent the unctuous beef fat from pouring onto the table while still encouraging enthusiastic bread dredging.

Bread
An airy focaccia baked daily with the same hints of rosemary and confit garlic found in the candle, using Italian flour and Italian olive oil for authenticity. It’s heavily salted to bring out the flavours in the candle. It’s great enough on its own, but the candle really takes it to the next level.