This briny, charry, lemony, garlicky number was a classic almost from the week it was introduced at the Newtown pizzeria. And like many classics, it’s surprisingly simple to make (though hard to master). 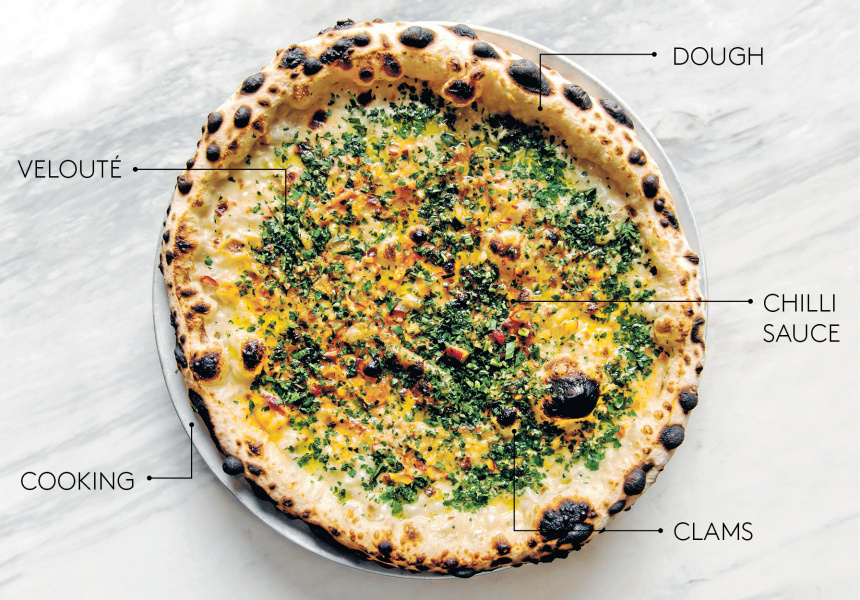 Sydney loves pizza. In a city seemingly flooded with dough, sauce and cheese, it takes something special to get our attention. Enter Bella Brutta’s clam pizza, which quickly became one of the city’s favourites after it appeared late last year.

While chopped Cloudy Bay clams add texture, most of the pizza’s flavour comes from its rich, thick wine-and-clam sauce; it’s like a cross between chowder and velouté. Fermented chilli sauce, raw-garlic oil and lemon juice add further vibrancy, but also plenty of moisture, making this particular pizza the biggest structural test for the Newtown pizzeria’s bases.

“I love a thin crust,” says Bella Brutta co-owner Luke Powell (also of LP’s Quality Meats), “but I hate the way it sags and slops once the sauce is on there. Taking the blackness further was the answer. We still get people sending it back saying it’s burned, but what are we supposed to say? That’s how we make it.”

Dough
Fine white Italian “00” flour and Australian wholemeal flour are combined with water and yeast and pre-fermented for eight hours. More flour, water and yeast are added, as are salt and a little olive oil, for crispness. Then the dough is machine-kneaded. Next it’s rolled into balls (200 at a time) and left in the coolroom to prove for 48 hours. The dough is brought to room temperature before service, and hand-stretched to order.

Cooking
Each clam pizza spends 90 seconds in a fiery, 450-degree, ironbark-fuelled oven. That’s all the time they need to develop the charry black blisters for which Bella Brutta has become known. With dough this thin, it’s a dangerous game: one wrong move with the metal peel and the pizza will tear in half.

Velouté
Cloudy Bay clams are steamed in white wine, leaving behind a briny stock. Butter and flour are cooked together into a roux, and the clam juice added along with milk and cream, creating a rich, thick velouté (French for “velvety”) sauce.

Clams
Once cooked, the clams are removed from their shells, finely chopped and scattered over the pizza. “The clams themselves have hints of flavour,” Powell says, “But they’re more there for texture. The sauce is the best thing about this pizza.”

Chilli sauce
Red chillies are blended with salt, covered with a layer of oil and left in the dry store for seven days. The mix is then blended again and bottled, ready to be drizzled over the velouté and topped with the chopped clams.