How to Create the Perfect Date, Italian Style

The perfect date is almost a mythical experience. Where to go? What to order? For our series in partnership with Peroni, we sought answers to all these questions and more. Who better to ask than an Italian restaurateur? John Fink remembers one date in particular. “This guy was obviously really keen on a girl because – and you wouldn’t believe it – they came in a Riva Aquarama speedboat. You know, the Italian ones with wood panelling,” he laughs. “We’ve got a berth outside. He had a driver, and the guy just waited in the Aquarama while they had lunch.”

That’s the kind of thing an Italian would do. They’re total romance fiends.

The week before, Fink’s restaurant manager, Graham Ackling, had received a phone call from the gent, letting the restaurant know he was booking for a special occasion. “We gave him a terrific table in the corner,” he says. “And the guy turned on all the taps. He was preparing her for the big one. No doubt about that.

“It was just an average Joe and it just seemed so natural to him. I just remember being really impressed. And she liked him, too. I guess we felt really chuffed to be a part of it – to be part of that narrative.”

As a restaurant owner, Fink has witnessed plenty of dates. Most have gone well. “We have one or two proposals a month,” he says, “and there’s always a celebration, maybe somebody coming over to shake the guy’s hand. There’s only ever been one occasion when she said no. That was pretty devastating.”

It makes sense. For 15 years Fink’s Otto Ristorante has been the perfect destination for a date – it’s right in the middle of Woolloomooloo’s Cowper Wharf, looking straight towards the Sydney CBD. It’s even more so now that Otto collaborated with Saatchi & Saatchi to repackage the restaurant in striking yellows and blues, reminiscent of the Amalfi Coast. “It is the perfect date restaurant,” Fink says. “It’s by the water, there are expensive yachts yawing away at their moorings. If you get a good day or a moonlit night, it’s pretty darned romantic.”

But how do you nail a date at Otto, Italian style? How do you not end up like that one guy who fell at the final hurdle? John Fink talks us through.

Have an excuse to mother each other and dip a napkin in water and clean each other up.

“I’d rig it,” Fink says, suggesting it’s a good idea to contact the restaurant ahead of time to make a couple of particular arrangements. “You say, ‘Hey, pretend you’re giving us some champagne but charge it to my card.’ You turn up with a girl and the manager says, ‘Oh, hello, Mr Fink, your champagne.’ It’s a bit of trickery because your partner thinks, ‘Oh, they know him here. Classy guy.’ That’s the kind of thing an Italian would do. They’re total romance fiends.”

And make sure you know which table to book. “If you want a hot date, ask for a table in the even fifties – 50 to 58,” Fink says. “They’re the date tables, all two-tops. They’re the front-row seats.”

Getting Started
Dating equals grazing in Fink’s book. “Don’t just go entree-main-dessert,” he says. “You want to stretch it out, get some bang for your buck.”

Instead, begin with some assaggi, perhaps share a dozen oysters from Pambula Lake.

Next, Fink recommends some zucchini flowers, followed by a pasta, which is handmade in-house. You might want to share a small plate each. The strozzapreti is the most popular – twisted pasta, king prawns, garlic, chilli, black olives, tomato and calamari sauce – although the restaurant runs a daily special.

But isn’t pasta a little messy and uncouth on a first date? “Don’t you want it to get a little messy?” Fink laughs. “Have an excuse to mother each other and dip a napkin in water and clean each other up. It’s a signal to say, ‘Hey I want to get messy with you.’ And for your partner to say, ‘Yeah, and I want to clean you up!’”

As far as dessert goes, Fink likes to think of it as a seduction.

The Main Event
For a main meal Fink recommends the pollo – spatchcock cooked on the grill, or the polpo – braised octopus with tomato, fennel, capers, olives and basil.

Something Sweet
As far as dessert goes, Fink likes to think of it as a seduction. “My favourite is the tiramisu,” he says. “It’s fantastic to share. It’s such a Pinterest dish – just amazing, for sure.”

And then it’s time to seal the deal, Fink says, whether that involves going home with your date or not. “I’m not sure I’d want to kick on, after all that effort,” he says. “You want to either be saying it was a lovely evening and hoping that you see them again, or if you’re at that point in the relationship, going home with them.”

But if you must kick on …
“I’d roll on to Love Tilly Devine, for sure,” Fink says, referring to the Darlinghurst spot a 15-minute stroll up the hill from Otto. “That’s a great little bar. There’s not too much noise, you don’t have to shout at each other. It’s intimate and romantic.”

This article is presented by Peroni. 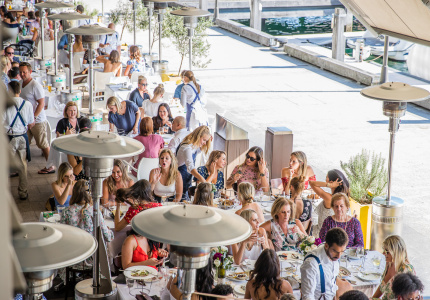