First Look: A Sydney Coffee Roaster Opens a Cafe in a Former Chocolate Factory With a Blinging, Gold-Wrapped Espresso Machine

Savour artisanal brews and vegetables on toast at this Chippendale warehouse, where old and new collide. 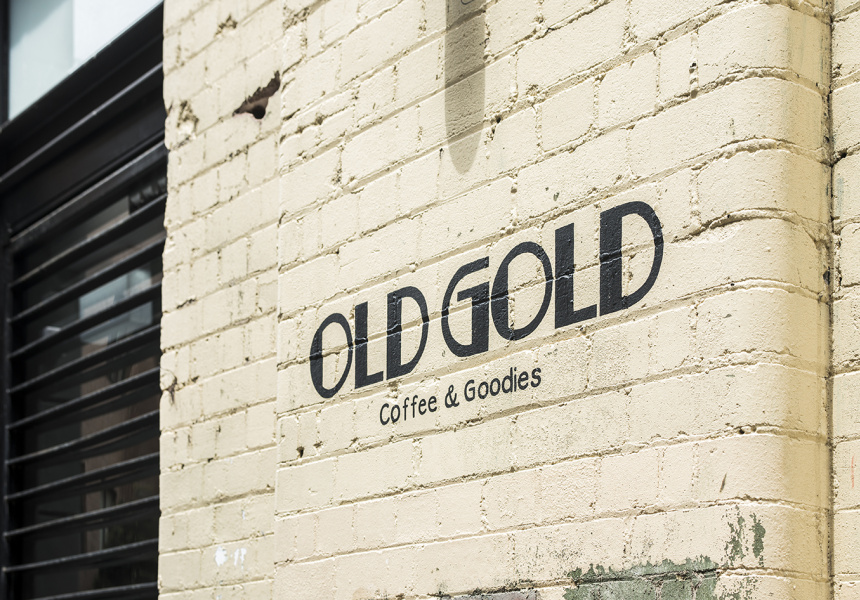 There’s something brewing at the old MacRobertson’s Confectionery building on Cleveland Street. It was once home to the Victorian chocolatier (creator of the Cherry Ripe, Freddo Frog and Old Gold bars) until the company sold to Cadbury in 1967.

It’s now a chic, multilevel business hub, but the newly renovated red-brick factory was all but empty until a week ago, when Sample Coffee opened its third outpost – named after the dark chocolate classic Old Gold.

Sample owner, Reuben Mardan, had been splitting his time between his St Peters roastery and now-institution espresso bar on Devonshire Street in Surry Hills. As recently as November last year, he wasn’t even looking to open a third cafe. But the MacRobertson’s building found him.

“It all came together really quickly,” Mardan explains. “It’s so rare to find spaces that are this beautiful – it’s one of those buildings that just speaks to you.”

If its walls could talk, they might tell of the area’s very palatable history. Chippendale was a storm of aromas in the early 20th century. The factory's cocoa mingled with vanilla and chocolate from the White Wings cake factory mingled and the biscuit-y malt from the Tooths brewery. These days it hosts a burgeoning hospitality scene that includes Brickfields, Ester, Cafe Giulia, The Lansdowne, plus a few more gems in Central Park.

Old Gold is on the ground level of the spacious building, between the Cleveland and Dangar street entries, and its fit-out riffs on the spot’s rich history. Chocolate tones are there in the dark reclaimed furniture, and the gold’s in the brass light fixtures above the counter. Then there’s the “gold nugget” – a blinging, gold-wrapped La Marzocco espresso machine.

History is echoed in the cafe’s design in more ways than one – when Precinct 75 first opened in St Peters, the Sample roastery was one its first tenants, becoming a magnet for the neighbouring businesses that took up shop in and around the old brickworks. Many of these neighbours now count as Sample’s friends and regulars, and designer-architect Ainhoa Martinez made a point of enlisting them for some meaningful touches.

They include builders Green Anvil Co and furniture maker Jonathan West, who collaborated on all the joinery and brass work; the latter was also commissioned for a 10-seater dark-wood communal table, which is haloed by two hatchback-sized pendants (pre-existing and coincidentally gold). Flowers and foliage are by other neighbours, homewares store Inartisan and florists Sweet Pea and Honey Bee, and the Wilds.

There’s a friend in the kitchen too. It’s run by former Little Lord owner Graeme Alexander, whose mid-century styled, Wes Anderson-inspired cafe brought inventive vegetarian brunches to Camperdown. He’s a long-time evangelist of the St Peters roastery; religiously brewing its single origins as head barista for Marrickville vegetarian cafe Two Chaps before running them at his own, much-loved cafe.

He sold the venue in January to focus on a culinary career, in which the spirit of his former vegetable-heavy posts evidently lives on. Cured egg yolk is shaved like parmesan onto a sourdough bruschetta of spiced beetroot puree, dill and caper ricotta. There’s also a zucchini version, plus a couple of serious salads. One is a filling Russian-style affair with sweet potato, dill and pickled celery, the other a zesty broccolini and cannellini bean dish with fresh mint, lemon and mild fermented chilli. Surprisingly, the single non-vegetarian item is the one he’s most chuffed about – a sturdy baguette from Thoroughbread in Kirawee, stuffed with mortadella and salami, bocconcini, and pickles. Just ask for the “hot and cold sandwich”.

“We believe coffee is very strong in bringing people together,” says Martinez, who is Mardan’s partner and a keen advocate for localism amid society’s disappearing “third places” (home being the first; work the second; libraries, cafes and other public spaces for random, meaningful interaction the third). “Our biggest motivation is to create a friendly space where people will want to come and meet each other.”

“It’s not something you can see, but it’s definitely something you can feel,” Mardan adds. “You only really get it when you’re served by someone who actually enjoys what they do.” If that ethos is anything to go by, Sample’s third place will have the old factory walls talking again soon. 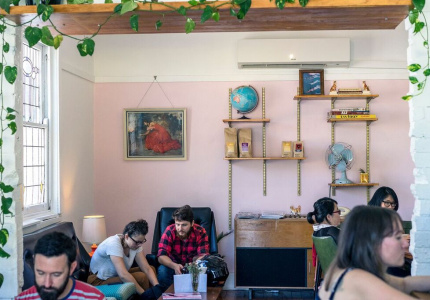