The expansion coincides with the launch of George Street’s pedestrian makeover. 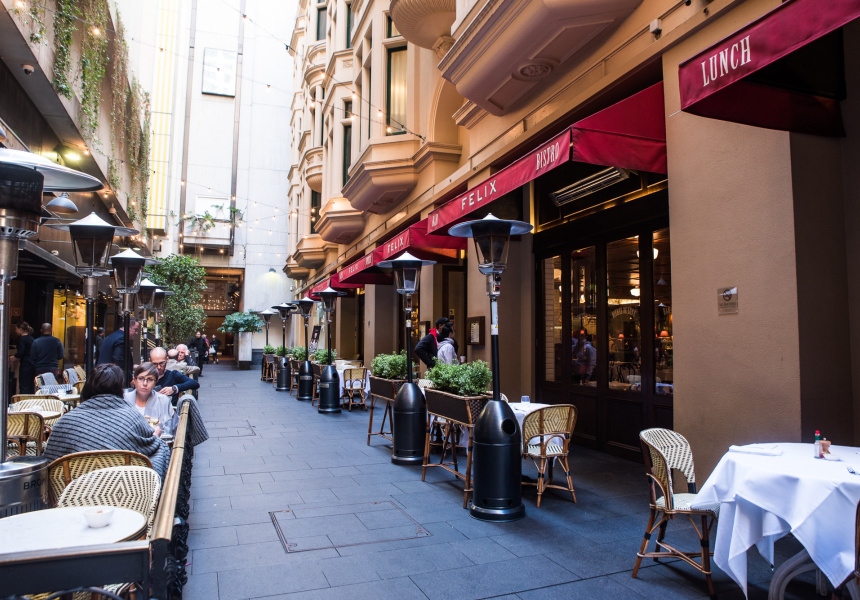 Recently billionaired Merivale CEO Justin Hemmes has announced he will expand the hospitality group’s CBD Ivy precinct. Merivale will open four new bars and eateries this year as part of Hemmes’s efforts, he says, to improve Sydney’s status as a world-class metropolis. The openings will align with the launch of George Street’s new look, which will include enhanced pedestrian spaces and the light-rail line.

The first opening will be Little Felix in July, a sibling to nearby French bistro Felix. It’ll be followed by a Lebanese eatery and bar, and a Mexican bar and diner, both on George Street, and an Italian bar and restaurant on Palings Lane.

Little Felix, which will open beside Felix, will be a cocktail bar seating 60. Felix’s head chef, Nathan Johnson, will put forward a simple French menu with a strong focus on charcuterie and cheese, which will be paired with French wine served by the glass and classic cocktails.

Excitingly, a bar concept inspired by Bondi diner Totti’s will also be launched. For it Mike Eggert will bring his puffy-but-dense bread and array of antipasto dishes into the CBD.

A casual Lebanese eatery and bar will open opposite Wynyard Station headed up by chef Simon Zalloua (ex-Rockpool). It’ll be split into two parts: a takeaway eatery at the front and a bar and diner at the back, which will have a vegetarian-friendly menu loaded with legumes, vegetables and dishes from a charcoal grill.

A Mexican eatery is still in the works.

The new venues will join the others in the Ivy precinct, including Bar Topa, Lorraine’s Patisserie and Ash St Cellar. This will be the first step in a total overhaul of the site, which Hemmes says will be “centred around how we eat, drink, socialise, communicate and work together in this city”. He hopes to create a neighbourhood of round-the-clock hospitality, aligning with the City of Sydney’s plans to transform the CBD into a 24-hour hub.

Merivale hopes to turn several retail sites in the area into hospitality concepts, bringing the number of Ivy laneway venues to 12. Ultimately, it wants to encourage people to linger in the business end of town after 6pm.

“Somewhere that ebbs and flows as life does, where 70-year-old best friends can be enjoying Espresso Martinis alongside 20-somethings exploring a wine list. Warm, inclusive, organic interaction and enjoyment, which is something all world-class cities excel at.”

The first venue is slated to open in July.