Not too kitsch and excellent burgers. 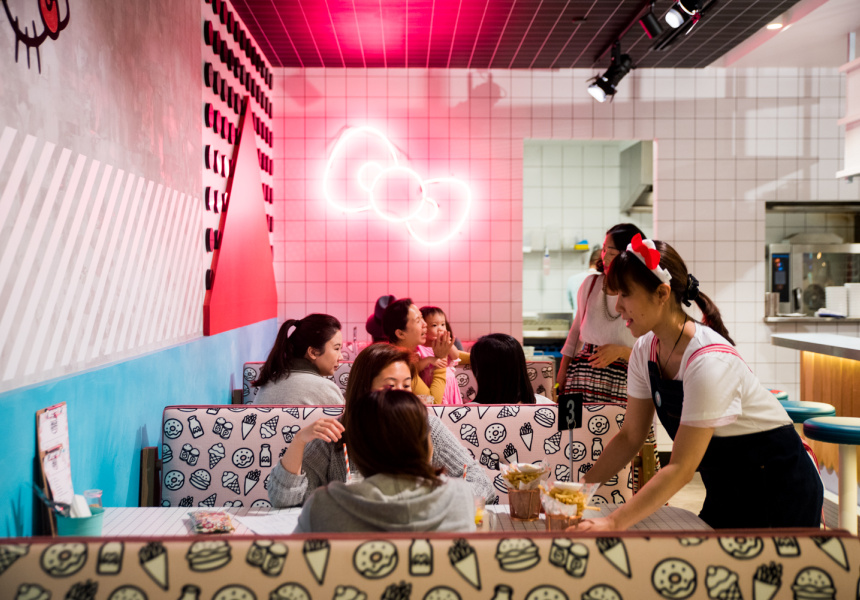 We count four Hello Kitties on the walls and one bespoke Hello Kitty statue. There’s the menu insignia and some waitresses are wearing cat-ear tiaras – that’s a whole lot less cutesy kittens than we expected. “Some hard-core Hello Kitty fans were a bit disappointed the burger wasn’t shaped like Hello Kitty,” says the diner’s creative director and owner, Dorothy Wang. “An article came out saying soon you’ll be able to get Hello Kitty shaped food, we laughed.”

Wang loves Hello Kitty, it’s just that cuteness isn’t her priority. “I don’t want everything to be Hello Kitty shaped, that’s entry level. I said to everyone on the team, ‘think about Hello Kitty and what it means to you. Present it or interpret it in the best way that you can’.”

“When she mentioned Hello Kitty, I was sort of surprised,” says Warren Turnbull, head chef and owner of Chur Burger and now menu designer and food consultant at Hello Kitty diner, too. “I was like, ‘What the hell do you have in mind?’ But then she explained it's a diner and they love Chur.” Turnbull is serving his signature burgers albeit adapted.

The burgers are soft, succulent and pack clever combinations. There’s a refreshingly un-American fried-chicken burger riffing off Korean tradition with cucumber kimchi and pickled vegetables; a crispy pork belly with slaw, maple bacon and apple and a cheeseburger.

Surprisingly, our favourite burger was the meatless Dotti, a combination of firm tofu and caponata-like eggplant chili jam and slaw. “As a vegetarian I went to a lot of burger joints, they mostly just throw in a veggie burger to cover the market. I told Warren – let's have the best vegetarian burger in Sydney.” Equally impressive are the two milkshakes, one an oddly sweet and zesty combo of white chocolate and yuzu, and a pancake milkshake which tastes exactly like it sounds.

While some more traditional Hello Kitty fans may be disappointed not to eat more kitten-shaped food, people looking for quality diner food won’t be. Wang has recruited Mecca to supply the coffee beans and T Totaler for tea. The fit-out, which is more a hash of current trends (white tiles, neon, burgers) in a diner format than it is Hello Kitty-esque, comes from design firm Luchetti Krelle (Momofuku Seibo, Zumbo). Wang says working with Turnbull is hopefully just the start.