The cake is getting playful makeover thanks to a former Black Star Pastry chef and the founder of N2 Gelato, with flavours such as black sesame, matcha, lemon-lime bitters and rose and strawberry. 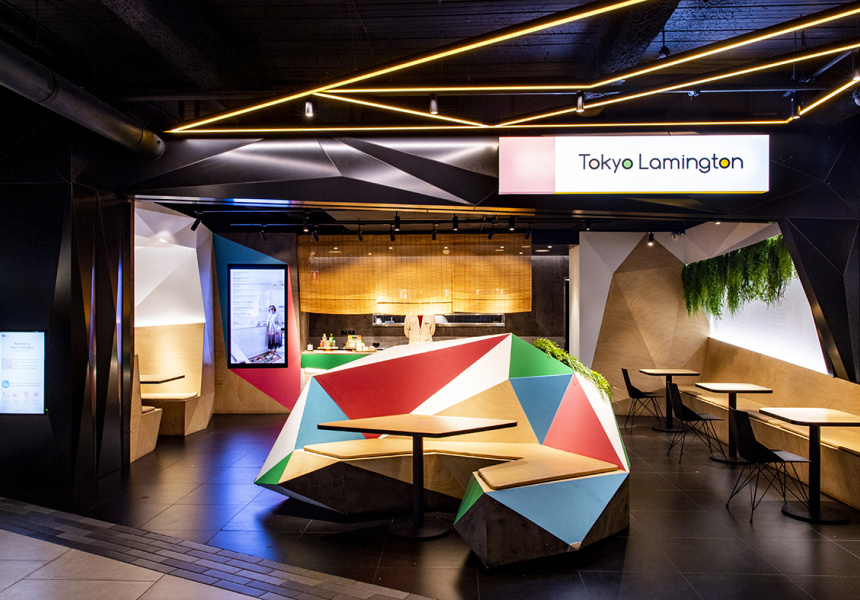 If you ask Eddie Stewart (former pastry chef at Black Star Pastry) and Min Chai (founder of N2 Extreme Gelato) what their plans were for 2020, they’ll tell you it didn’t involve returning to Sydney. The pair have been living abroad since 2018, when they left Australia to open a cafe in Tokyo.

“We actually had some grand plans for Singapore. We were going to open a dining precinct there,” Chai tells Broadsheet. “We had also signed a contract to cater for the Australian Olympic team at the Tokyo Olympics.”

Even though their grand plans came to a sudden halt, it hasn’t stopped them from opening their new dessert shop, Tokyo Lamington, in Market City. “We sat on our hands for two months, but thought we needed to do something here,” Chai says.

As its name suggests, the store is all about lamingtons. But as Stewart and Chai’s past roles working with companies that flipped the script on classic flavours and recipes may suggest, these lamingtons are not at all Country Women’s Association-approved. Instead, they’re playing with flavours such as black sesame, yuzu meringue, matcha and puffed rice, fairy-bread popcorn, lemon-lime bitters and rose and strawberry.

Stewart’s cakes are fluffy and moist, and filled with aerated whipped cream. He doesn’t skimp on quality either, using ingredients such as Callebaut chocolate, rose petals from Iran and black-sesame paste and matcha imported from Japan.

“I think everyone’s memories of lamingtons are not great. It’s usually that stale, crappy version from the local bakery, so we wanted to improve that and make lamingtons cool again,” Stewart says.

The duo came up with the idea for alternative lamington flavours a few years ago, when they introduced the Aussie cake (which has also been claimed by New Zealand) to the menu of their Tokyo cafe, N2 Brunch Club. Since then, the concept has found its way into pop-up events, including Singapore’s Grand Prix F1 and more recently in a collaboration with Koko Black.

“If you think about it, lamingtons are such a perfect vehicle for flavours. Yet all the lamingtons you ever see always have chocolate, coconut and cream, so we thought let’s do something fun,” Chai says.

Just like its lamingtons, the shop fit-out is quirky and fun. There are colourful geometric shapes splashed against natural timber furnishings and hanging greenery. Plus, there are hints of modern Tokyo, with a noren curtain hanging over the counter and displays of handmade ceramics from the duo’s private collection.