Sam Dastyari [centre] in a halal butcher (via Twitter) 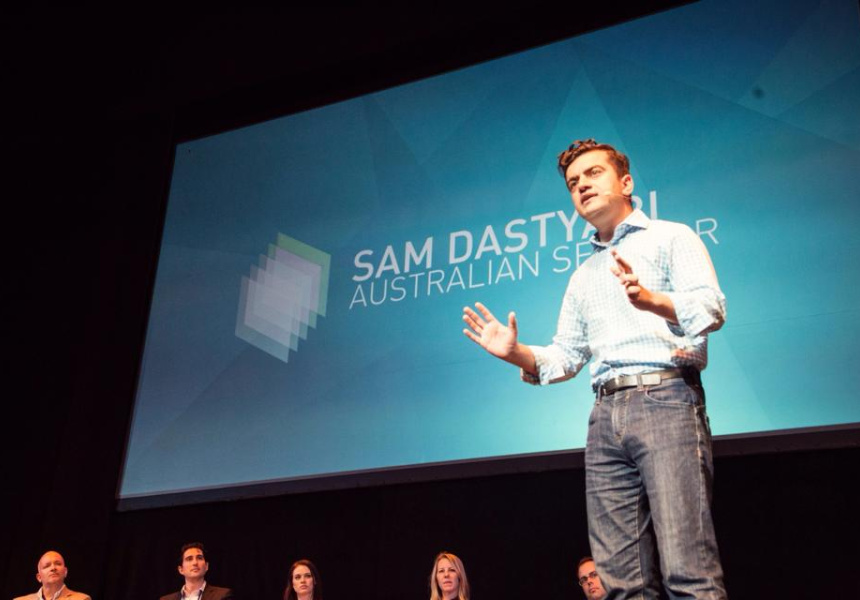 If the Australian Senate can’t reach bipartisan support for delicious greasy takeout, our nation is surely doomed. Yesterday Sam Dastyari, a NSW Labor Senator, used the last moments of his Senator’s Statement to stand in parliament and review a kebab shop; the King Kebab House in Campbelltown. Dastyari chose to focus on the beloved halal snack pack: hot chips and greasy meats, drowned in sauces of your choice.

“The greeting I got [at King Kebab House] was 10 out of 10,” Mr Dastyari declared. “The signage was 10 out of 10. It was very clear I was purchasing halal products – something that I know many senators on the other side are concerned about. The sauce: fantastic. The chips, the meat, the packaging, the Styrofoam container … incredible.”

“With our friends, the brothers and sisters of the Halal Snack Pack Appreciation Society, we will experience the delicacy of a halal snack pack together. Bringing together both the conservative and progressive sides of politics in what can only be described as a great Australian tradition of meat in a box.”

A spokesperson for Senator Dastyari says this invitation was a friendly one. “James McGrath just happened to be the government senator who was sitting in the chamber,” says the senator’s staffer. “They were just having a laugh across the chamber. It was very light-hearted and good natured.”

Good nature aside, these comments aren’t without context. Last year, conservative Senator Corey Bernardi led a parliamentary inquiry with Dastyari into halal certification, which concluded in November. During a speech in December, Dastyari, Australia’s first Iranian-born politician, said “There was an incredible amount of Islamophobic hate and race mongering that, I think, comes at the heart of some of the views that were presented here, barely disguised or concealed under the guise of freedom of choice and freedom of religion. My staff and my team put up with all sorts of abuse during the inquiry. I am sure I speak for all senators and their staff when I reiterate that we do not appreciate being directly confronted by those types of extreme views.”

The spokesperson explained that yesterday’s comments were not intended to reignite the discussion, but simply promote snack pack awareness and how popular they are.

“Senator Dastyari will absolutely be following up with Senator McGrath,” says his staffer, “And very warmly and cordially invites him to come out to King Kebab and enjoy the meat in the box.”

Luke Eagles is the founder of the appreciation society, starting the Facebook page in December of 2015 with a group of likeminded enthusiasts. The group currently has more than 57,000 members. After seeing Mr Dastyari’s speech, which addressed his community directly, Eagles immediately contacted the senator.

“I hit him up [with] a message afterwards,” Eagles says. “He sent me a quick friend request and we had a chat about it. He’s a good bloke. Maybe he’ll come down to the next [HSPAS] meet up and give a little speech – he’s definitely all for it.”

Senator Dastyari has a history of creative uses of his time in front of the parliamentary microphone. His latest speech should be seen as a simple celebration of the delicious takeout, and an all-too-rare respite in parliamentary detachment from everyday Australia. Eagles also is eager to see Mr Dastyari’s invitation accepted, and suggests a venue where Liberal Senator McGrath can taste a typical halal snack pack.

“I have the perfect place, they’d get looked after very well,” Eagles says. “I’d take them to Metro One in Ashfield. Not only are their snackys 10 out of 10, the environment and the experience they’ll have being looked after by the family … you can’t get it anywhere else.”