A dim sum master with 28 years of experience is in the Canton! Canton! kitchen. 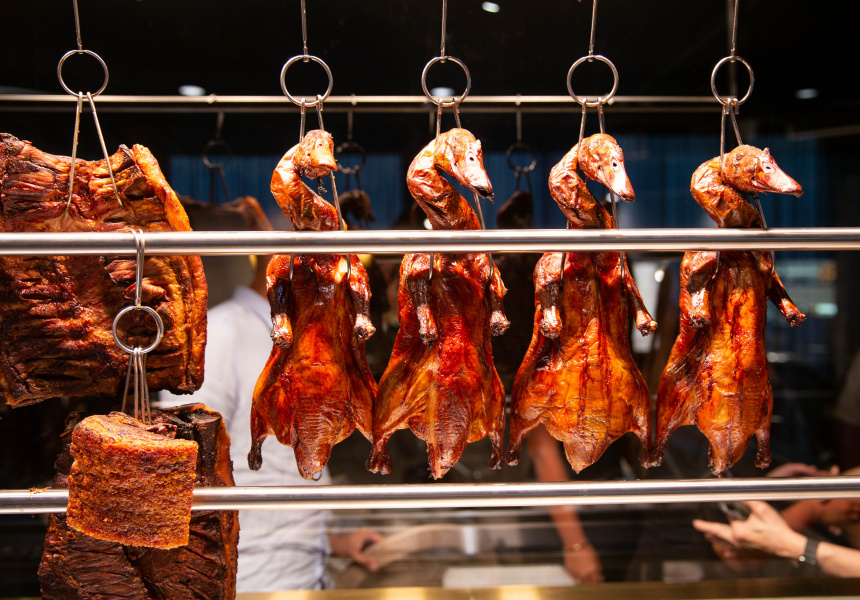 David Howe and Raymond Teo tell us they want to serve the best dumplings and Chinese roast meats in Sydney. A lot of people say things like that: “We make the best coffee in Sydney”; “No one in the world makes a better Bangladeshi fish curry than I do.” With this statement though, Howe and Teo might actually have a reasonable claim.

The two aren’t new to Sydney’s Chinese food scene. A year ago they were running the three now-closed Sydney outposts of famous Hong Kong dim sum restaurant Tim Ho Wan, which was coined the world’s most affordable Michelin-starred restaurant chain.

On February 18 they’re launching Canton! Canton! (after a series of friends and family dinners) in one of the old CBD Tim Ho Wan sites – a Cantonese restaurant led by a dim sum master with 28 years of experience, Jacky Chan, and second-generation roast meat specialist Ron Ooi.

As is typical in many Cantonese restaurants (the cuisine hails from Hong Kong and surrounds; it’s the most popular style of Chinese food in Sydney), the morning will be yum cha focused. Chan’s signature dumplings will be delivered via table service (not carts), along with nine varieties of congee and Tavalon’s loose-leaf teas.

They tell us they closed Tim Ho Wan in Sydney so they could do this style of food. “We had a very limited menu [at Tim Ho Wan]. Our vision is different to the franchise model,” says Teo.

They’re also keen to jettison Tim Ho Wan’s service model. “It's very canteen style; they literally want you to sit down, eat and get out as soon as possible, so they make it very uncomfortable,” says Howe.

Where Tim Ho Wan had metal stools and menu lists you ticked to place your order, Canton! Canton! has bespoke furniture, half a pagoda roof shading a line of dining booths, a massive custom-built door that Teo had to fly in from a Chinese artisan, and waiters who walk you to the bathroom.

“I wanted to make it look like a market place, but the modern market places of Hong Kong aren't very appealing. I wanted something more romantic, more theatrical. So I looked for inspiration in vintage street markets from the 1930s,” says Teo.

Teo and Howe have formed a new restaurant group Jewel Pantry. Following Canton! Canton! they’ll open a Cantonese/South-East Asian takeaway joint on Pitt Street (where the other city Tim Ho Wan once was), and they have a rough plan to bring Japanese-Peruvian food to Sydney. “We are already thinking of our next restaurants. Not necessarily Cantonese. As long as it’s a good idea and good food, we’re interested,” says Howe.