Get the Marrickville brewery’s entire range poured on the site where it’s made. The Grifter Brewing Company, Marrickville’s infant brewery, has opened its doors to the public as a three-day-per-week bar. The previously nomadic brewing trio has been creating and bottling beers out of its new Marrickville warehouse for pubs and restaurants, but now its beers are available on tap, on-site.

Working with Gareth Robertson from Blackwood Collective, the brewers have built a bar that, despite its industrial warehouse shell, is comfortably reminiscent of Sydney’s old-school pubs. “Gareth built the bar top and all the tables in Brisbane, and then drove them down,” says Matt King, one of The Grifter’s brewers and co-owners along with Trent Evans and Glenn Wignall. “His attention to detail on our fit-out was amazing,” The bar’s blind side is particularly classic, with its own square of pub-style carpet topped with a matching maroon pool table.”

The bar will serve the brewery’s entire range on tap and/or in takeaway 946-millilitre squealers. The Grifter Brewing Co.’s staples – the Bright Eye Pilsner and the Pale Ale – will run indefinitely next to six other taps pouring the company’s various one-off batches and experiments. Right now, the taps are running Demon Lungs, a porter made with smoked hops courtesy of LP’s Quality Meats, and the GB Bitter, a hoppy concoction made via a collaboration with Parrot Dog Brewery for Sydney Craft Beer Week.

“We just did a watermelon pilsner which was super refreshing, it was the first beer that sold-out here,” King says. Although he says the group isn’t aiming to be wacky or overly experimental, the success of the watermelon blend is likely to influence its future brews. “We're talking about doing a few things, we might try and do a cucumber kölsch,” he says.

At this stage, the food menu is restricted to simple bar snacks (including Sydney’s Darling Jerky) and sauerkraut, but King says their excited to work with some guests chefs in the new year. “We sell our beer at a lot of really good restaurants and we'd love to partner up,” he says.

The Grifter will be open Wednesday December 23 from 12pm-7pm. 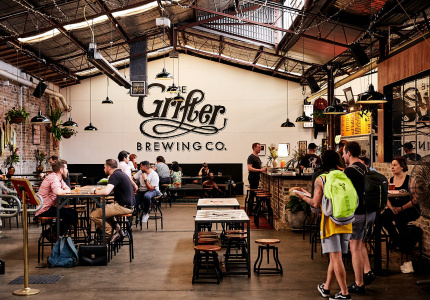