Babylon to rule above Pitt Street Mall with its 1200-square-metre bar and restaurant. 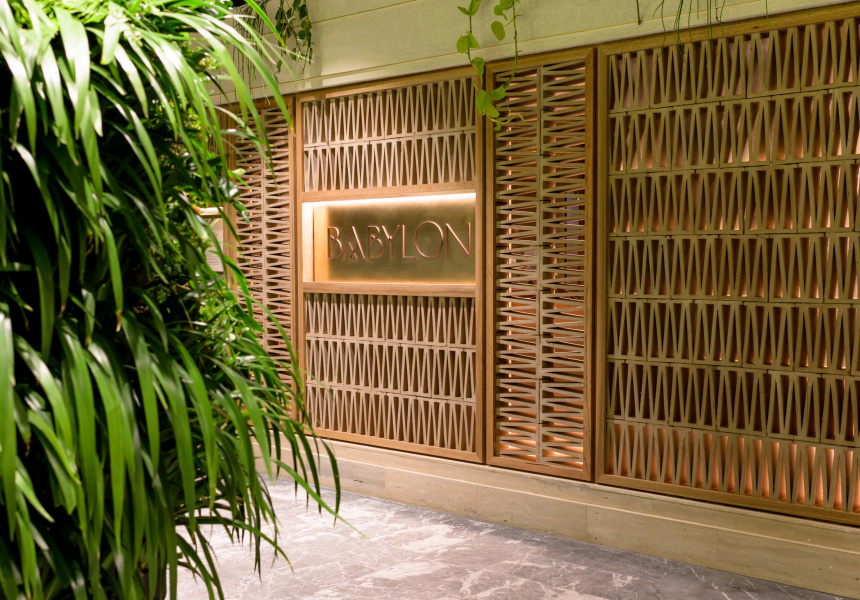 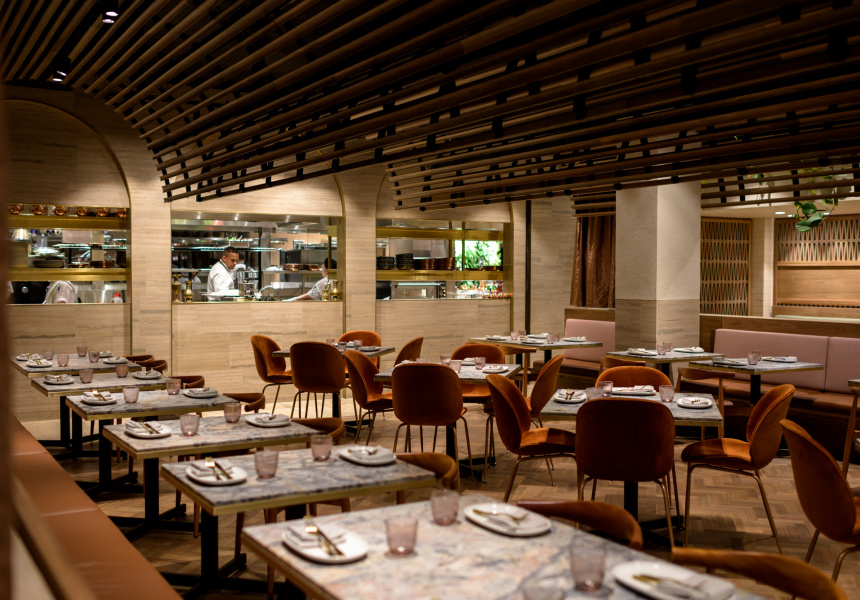 The rooftop space that’s remained vacant on level seven ever since Westfield Sydney reopened in 2010 has now been partially transformed into a Levantine-inspired bar and restaurant called Babylon.

The 800-seat venue is sprawled across more than half the massive 2000-square-metre rooftop space, with indoor and outdoor seating, a large outdoor terrace, plus multiple private and semi-private dining spaces.

Designed by architects from Hogg & Lamb and interior stylists Stewart + Highfield, Babylon is an imagined recreation of the ancient city, with warm textures and colours of burnt orange, pink mauve, mahogany and blue-grey throughout.

“As you walk through here, you’ll feel there’s an instant change of pace, like you’ve taken a step back into a much more relaxed time,” venue manager Mark Dixon tells Broadsheet.

Brisbane-based Mantle Group Hospitality (MGH) is behind the venue. It’s the same team that runs the James Squire microbrewery The Squire’s Landing in The Rocks. Babylon marks the group’s second NSW venue, with their third – a contemporary Cantonese restaurant called Duck & Rice – to open next door this week.

Dixon says the group is unfazed by previous closures. “Our venue is very unique; I don’t know anywhere in Sydney that has a rooftop of this size. We have an offer that is world-class when it comes to food and drinks and we have employed the right people to help us execute this.”

Fronting the open kitchen at Babylon is head chef Arman Uz (ex-Efendy, Jaaks Dining), who has drawn on his Turkish heritage and childhood memories to create two separate menus for the venue – one for the restaurant and the other for the bar.“There’s street food, there’s restaurant food, there’s home-cooking and food for special occasions,” says Uz.

At the restaurant, the menu is split into flora, fauna and ocean. Most dishes are cooked over the custom-built wood and charcoal mangal (Turkish grill). “Cooking using woodfire is normal to me because in any Turkish kitchen it’s set up with woodfire — even at home. We didn’t use gas; my first gas barbeque was when I moved to Australia 15 years ago.”

The bar team is led by David Nutting, who has some decent venues on his CV (Restaurant Hubert, Eau de Vie and Miss Peaches). He brings those Middle Eastern and eastern Mediterranean flavours to his cocktails, mixing baklava syrup with mezcal and lime, and vodka and sweet vermouth with hibiscus, rosehip, pomegranate and house-made watermelon soda.

There’s also a wine list of almost 300 bottles courtesy of sommelier Simon Howland (ex-Nomad and Catalina), a 250-plus whisky list that includes 150 single malts, and 400 bottles of international and Australian spirits, including some Middle Eastern favourites such as ouzo and raki.

The main entrance is via the express escalator from Pitt Street Mall, or inside Westfield Sydney. Entry from 10pm to 12am is via the lift from Castlereagh Street.