Goodbye Horses is Everything You Want From a Local Cafe Chris Bull is frank when talking about why he opened Goodbye Horses. "I was sick of working at bad cafes," he says. “When you work for yourself, you get things done the way you want them. And when you get to work with your best mate, it’s even better.”

Bull opened Goodbye Horses with Morgan Knight in May; him working in the cafe’s open kitchen, and Knight presiding over the coffee machine.

Although the breakfast menu has a few familiar dishes, such as Bircher muesli and a bacon-and-egg roll, there’s food that’s left of centre, too. “The Succotash is a corn-based hash,” Bull says. “My dad used to make it for me when I was a kid.”

Sweetcorn is charred and cooked with fried potato, braised ham hock and served with a poached egg. The maple-banana pancake is a dessert that barely bothers to masquerade as breakfast. Bull makes the maple-banana ice-cream himself. “We’ve got a few things up our sleeve for sweets,” he says.” We’re trying to nail it, but things got busy really fast and we haven’t had time.”

For lunch there are Vietnamese banh mi-style dishes, including the coconut sambal pork roll with green papaya, and the OG chicken roll, a dish inspired by Bull’s days working at Good Luck Pinbone. “We tried to get rid of the chicken roll to a do a more summer-friendly menu, but the backlash from customers was too much,” he says.

Coffee is Single O Yeehah! blend, and besides the usual long blacks and flat whites, Knight is focusing on batch brews. For summer, there’s a cold batch brew and an iced chai made from Melbourne’s award-winning Prana Chai.

Goodbye Horses shares the block with The Temperance Society and Rio. It has an open space with high ceilings; white-washed brick walls lined with plants; and a subway-tiled coffee counter and kitchen. The tables are natural pressboard made by Bull and Knight, who did the entire fit-out themselves. 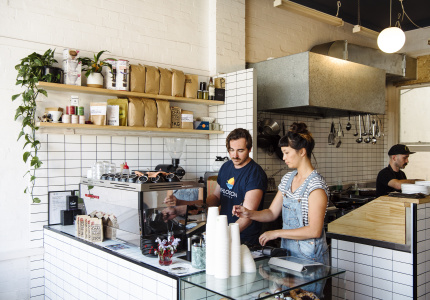