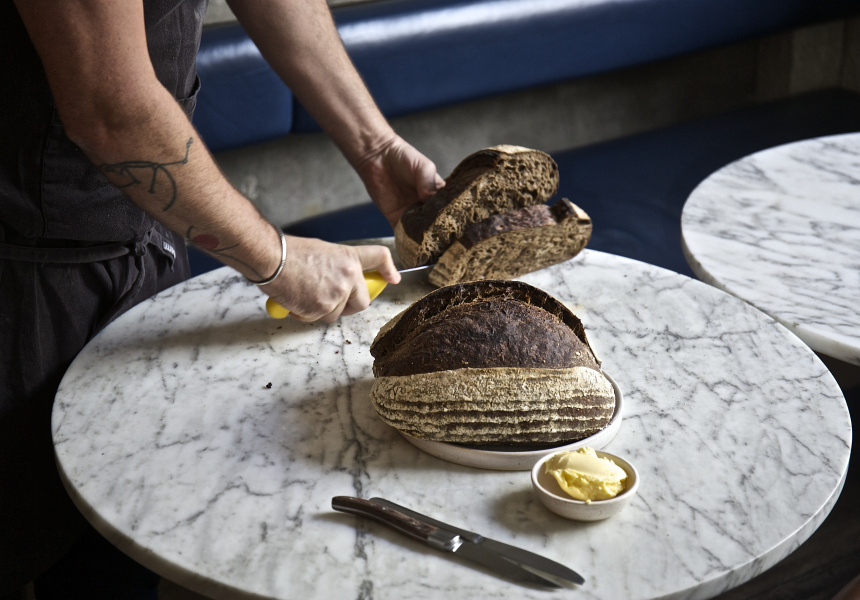 While a slew of Sydney restaurants quickly made the switch to takeaway after the government banned dining in last month, others with dishes that don’t lend themselves so well to takeaway have taken more time to perfect their to-go menus.

One of those diners is Chippendale’s inventive, woodfire-centric Ester. “It’s been really hard to translate our menu to takeaway,” head chef and owner Mat Lindsay tells Broadsheet. “It’s been a very challenging process. If people are having this stuff at home we want to replicate the quality of the restaurant.”

But Lindsay and his team have now figured it out, and they’re offering some dishes for takeaway Wednesday to Saturday, including the famous potato bread; the signature dessert, leftover sourdough ice-cream; the house-made cultured butter; caramelised milk tarts; and the woodfired brown-butter granola (which Lindsay makes while he chats to Broadsheet over the phone). You can also buy pre-batched cocktails, beer and wine to take away, and soon, you’ll be able to purchase the condiments that are made in-house.

Each week Ester will also give one of the restaurant’s chefs the opportunity to create a finish-at-home meal box for two, available for pick-up on Saturday. This week, Turkish-born chef Ozge Donmezoglu created a meal influenced by her homeland, with rice-stuffed mussels; kofte; a woodfired cheese-and-potato borek with fermented chilli; lamb kebab with pita; and woodfired rice pudding for dessert. The majority of the meal is ready to eat – you just need to heat it up.

Lindsay says the lockdown has hit his business hard – it’s been closed since the ban on dining-in was announced on March 22. “You can’t get more affected than that,” he says.

One of the main reasons he’s reopened for takeaway is to support his international workers, who rely on the business’s support of their visas to stay in Australia. Visa-holders, like so many people across the country, don’t qualify for Centrelink and often aren’t covered by the government’s stimulus measures.

Lindsay says he’s got similar plans for Ester’s sister restaurant Poly, which will soon launch aperitivo boxes similar to Ester’s meal boxes. They’ll be available on Saturdays to start, but may also be available on Fridays, depending on demand. “We’ll do big family-style pies, and maybe some bread and tarts,” Lindsay says. “It’ll have a bunch of different things, like pickled mussels, Basque pate, crackers.”

Of course, it wouldn’t be an aperitivo box without cocktails and wine, so expect some booze options too. Lindsay will also be putting together an accompanying playlist to listen to while you snack and sip.