Going the Whole Hog with the Butchers at Hudson Meats

As part of our exploration of American barbeque with Bulleit Bourbon, we speak traditional pork butchery with Micah Hewitt from Hudson Meats. He takes us through the whole hog, from shoulder to ribs and the fat around the belly. 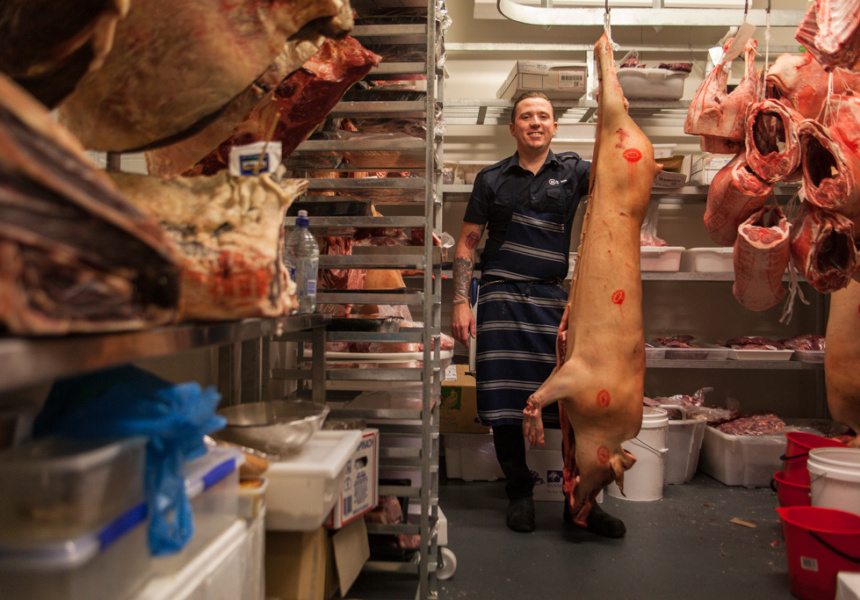 Collard greens and mac ’n’ cheese are great and all, but if we’re talking real talk, American barbeque is all about meat. Recently, we looked into the best cuts of beef to throw on the fire, which is fine - if you’re in Texas. Down south in Carolina, however, anyone will tell you real barbeque is spelt p-o-r-k.

Down south (of the world) in Australia, many of us had written off pork as a bit, you know, boring (except bacon – we never forgot bacon). The availability of lean meat at extremely cheap prices on our supermarket shelves meant that out of dozens of pig varieties, only one or two breeds suitable for intensive farming were commonly available.

A new breed of anti-established young butchers have appeared on the scene, determined to teach Australians to cook hog the way it’s always meant to be cooked. Micah Hewitt from Hudson Meats admits that while not everyone has the stomach for the life of a butcher, he’s probably something of a rare breed himself. “I might have a bit of a dark sense of humour, so it doesn’t really faze me…”

Hewitt, who began his butchery career as a 16 year-old clean-up boy in Newcastle, strongly believes we need to reclaim the old ways and return to the local butcher. “Supermarkets pretty much killed butchers over the ‘80s and '90s,” he says. “But it’s come back with the cooking shows, I believe. And the ethical side of it has also really helped us along. You can call anything organic or free-range these days, but it really comes down to trusting your butcher.”

Ethical meats - free-range pigs that are raised and slaughtered humanely - are one of Hudson’s specialties. Rare breed, free-range pigs like Berkshire, Tamworth Reds, Duroc and Wessex Saddlebacks are all in stock at Hudson. Unlike the kind of pork that’s commonly found on the supermarket shelf, rare breeds are valued for being a little unusual - and far from lean. “They’re a lot different than your normal pigs,” says Hewitt. “They’re not as commercial in the way that meat isn’t as big, but they’re bit darker, and carry more fat.”

That extra fat is a must for quality barbeque. When you plan on cooking slowly at a low heat, nothing’s better than a bit of marbling. “As we know, fat is flavour,” explains Hewitt. “Working harder forms a harder muscle tissue. In some of those cuts it has a gelatinous character to it, with lots of sinew. When that’s slow cooked, that sinew breaks down and gives you that really nice texture to the meat.”

Over a couple of knock-off whiskeys, we got the low-down from Hewitt on which bits of pig fare best on the barbecue.

One cut that can be put to great use in American barbeque-style cooking is the shoulder, prepared on the bone, or with the bone removed and rolled. It’s the kind of cut that is traditionally considered ‘secondary,’ in that it’s not as lean or tender as, say, a fillet, but Hewitt reckons cooks should get out of their comfort zone and give it a try - then reap the rewards.

Because the cut is less tender than the fillet or loin, it’s best eaten when it’s cooked for 12 hours or more. “The muscle texture, it really suits long, slow cooking,” explains Hewitt. “It’s got the moisture in the extra fat so that when it is cooked for that length of time the fibres will break apart, as opposed to the leaner, more tender cuts.”

While the rolled shoulder is a less traditional cut in American barbeque, it allows you to get the creative juices flowing and try out something a bit different - like a crisp-skinned porchetta stuffed with garlic.

The most popular pork cut for barbeque is, you guessed it, the ‘baby back’ ribs. The cut is sourced from a younger, market-weight hog rather than a fully grown adult. “Off a pig, you only get two sets,” explains Hewitt. “They’re from the loin ribs, which are just next to the belly.”

Spare ribs, cut from the side of the beast, are also a damn tasty cut. Though they’ve got a larger bone-to-meat ratio, the fat and collagen on spare ribs make them a more tender cut when cooked low and slow. “The more fat, the more moisture in the meat, the more flavour,” says Hewitt. It’s like he’s reciting a mantra.

While other cuts are often barbequed quite simply, with, say, a salt-and-pepper rub, ribs are prepared with a sticky, sweet sauce to give them a toffee-like glaze. That stickiness makes ‘em extra tasty, but extra messy. Don’t wear a white t-shirt.

This boneless, fatty cut needs no introduction – we all know how delicious it is. Pork belly’s thick layer of fat imparts flavour, while protecting the tender meat underneath through the barbequing process.

“It’s a great cut, there’s lots of moisture in that,” says Hewitt. “It’s got that coating of skin, which crisps up beautifully.”

If you really want to take your barbeque skills to the next level, there’s only one option: cook the whole darn pig.

“These days, a lot of people are using more of the pig; the nose to tail,” says Hewitt. “As we’re getting the whole carcass, we can get them pretty much whatever they want.”

Serious barbeque masters are getting into the whole hog not only because it’s challenging (and tasty) but because it’s the least wasteful methods of preparing a pig.

But be warned: barbequing a whole hog is no small undertaking. You’ll need to be prepared to stay up all night, tending the fire and turning the meat for as long as 24 hours. You’ll also need a pretty serious smoker, spit or pit set up, plus a well-stocked whiskey cabinet and a few friends to share yarns with while staring into the fire.

You won’t regret it. Smoking a pig whole, or cooking it on a spit over coals, is more than worth the time and effort when you and your mates are tearing tender meat off the bone. 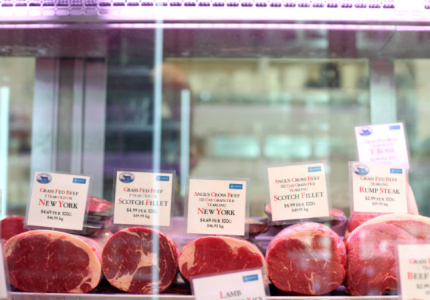