The Glenmore Hotel: Top of The Rocks

Perched atop The Rocks, The Glenmore Hotel overlooks the Opera House and now has something to sing about with a major revamp. Nine months after closing its doors for a renovation, the Glenmore Hotel – an old-school pub with an amazing view of Circular Quay – has reopened in style. Out are the sticky carpets and in are snazzy tiles, function rooms with a neo-Victorian thrust, a fancy bar menu and, well, obviously they kept the view.

Most old pubs in The Rocks remain relatively untouched by the hands of interior designers with a flair for décor post-1975. The Glenmore has moved away from the ‘authentic’ look favoured by tourists and into 2012. That said, it’s not all too different – the clientele are boisterous and loud on the upper deck, which now has a retractable roof to shield drinkers and diners from the sun and rain.

The three-storey building has been standing over the harbour since 1921 and is protected by its heritage listing. Even though there are now two restored smaller balconies on the Cumberland Street side of the pub, the owners had to maintain the original style of the building, including the shades of paint that characterise the glam Victorian rooms that skirt the sides of the building and are used for private functions.

A few days after reopening without much fanfare, the pub is packed, so there’s either a loyal clientele or bunch of people keen on surf ‘n’ turf with an elevated look at the Opera House. And why not? 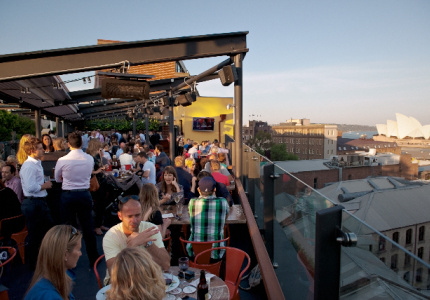