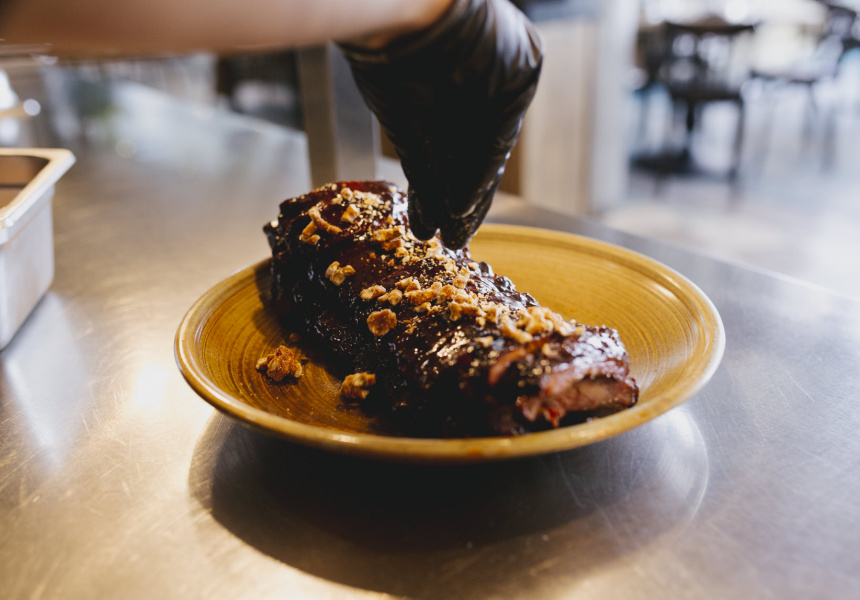 Nola Smokehouse and Bar at Barangaroo might be inspired by New Orleans, but not all its spice has roots in the Bayou state.

“It’s familiar but not tired. It just works so well,” says Spencer. “The Bull's-Eye glaze brings a unique sweetness and rich whisky flavour to the forefront of our ribs and matches perfectly to the smoked ironbark that we use in the smokehouse."

You can get these pork ribs at Nola until November 20. In the meantime, here are Spencer’s tips on cooking ribs at home.

Ribs
It all starts with choosing the right kind of rib. At Nola Spencer likes a St Louis cut, which has a shorter bone and more meat, but this can also be swapped for baby-back style. The ribs are brined for six hours in a solution of salt, sugar and spice, then patted dry before a creole mustard mix is brushed over top, followed by a dry Cajun spice mix that stays on for 24 hours.

Smoke and glaze
The next day, it all goes into the smoker for an hour at 165 degrees, before being taken out and brushed over with Bull’s-Eye Sweet Whiskey Glaze. The ribs go back into the oven for another hour at 135 degrees before being finished off with more glaze and a sprinkling of caramelised pretzel on top.

“What’s nice about this recipe is it’s a dry style of rib,” Spencer says. “You can handle [the ribs] quite nicely [while eating] – they’re not going to drip everywhere. It’s more intense in flavour, and you’ve got all that sugar, spice and saltiness in there.”

Home seasoning
The combination of a dry spice rub and lightly glazed sauce also helps tenderise the meat, drawing out moisture and allowing flavours to penetrate the flesh. While you might not get the same intensity of flavour cooking at home without the full two-day process, Spencer says that with some shortcuts you can still achieve a similar taste profile.

“You really need a good quality Dijon mustard to brush on the ribs before adding the dry rub,” he says. “As soon as you get those on, start to season the meat. The longer it’s left on the better, but you can also leave it for a minimum of an hour before baking.”

You can speed up the process by using a pre-made sauce. “You want a fine balance throughout the sauce of sugar, heat and smoke,” says Spencer. “It’s less work than making one yourself.”.

The whiskey glaze provides more than just a slight kick – it subtly elevates the sweet and smoky flavours. “It adds a different little flavour towards the end that comes out at you and [draws attention to itself],” he says. “It has a certain peatiness that naturally adds some form of smokiness anyway.”

Simple pleasures
While Nola’s style and cuisine is a departure from the classic French brasseries and fine diners where Spencer worked early in his 25-year career, he still applies some of the principles and techniques for preparing meat that he learnt then.

“At this stage in my career, I have a greater appreciation for things that are simple, and treat them with a different respect and attention to detail,” he says. “You can really get a lot [of flavour] from these basic cuts of meat and make them extremely tasty.”

The sweet whiskey glaze pork ribs are available at Nola Smokehouse and Bar from October 23 to November 20.